A shocking video posted to Twitter Saturday night shows a car crash and subsequent fights at the McDonald’s on Gallivan Boulevard in Dorchester’s Adams Village neighborhood that sent two people to the hospital.

Much of the incident was captured on video by a patron of a bar across the street from the Mcdonald’s.

The video shows people in the McDonald’s parking lot walking up to their mopeds when a red sedan speeds toward them, smashing a fence at the McDonald’s and running over one of the mopeds. The moped’s rider barely escaped the crash, hopping a fence as the sedan came to a halt.

The moped rider tries to get his moped out from under the car, while one of the other moped riders picks up what appears to be a large rock and throws it at the sedan, smashing the front driver’s side window.

The police report from the incident says that Boston police officers met two victims in the McDonald’s bathroom. They said both victims had head injuries, among other lacerations, and were bleeding.

Police said one victim seemed disoriented and confused and couldn’t talk about what had happened. They said he then grew pale and coughed up blood and vomit onto the sidewalk.

The report said that the second victim said she was the passenger in the sedan. She said that they had been driving down Gallivan Boulevard when they saw a group of mopeds weaving in and out of traffic.

The victim told police she lowered her window and asked the moped riders to let the car through, but the riders began throwing rocks at the car. She said the car had rear-ended another car during that time and so they had called 911.

The victim told police that they then tried to pull over, but were assaulted by the moped riders, who were both male and female and of varying ages.

The two victims were taken to Boston Medical Center for treatment.

The report says officers then spoke to a witness who told them she had seen the mopeds weaving in and out of traffic, driving erratically, and throwing rocks at the red sedan.

A second witness, the report said, who was in the same car as the first witness, corroborated the first victim’s story, with both describing the moped riders as the aggressors.

Police have not yet identified any suspects. 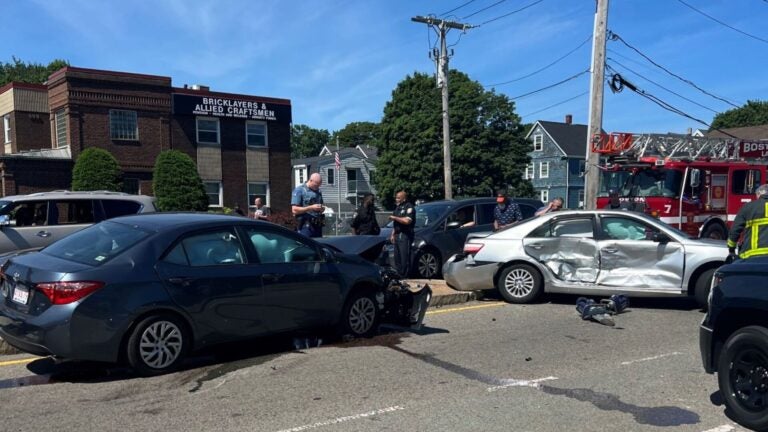