One of the journalists targeted by recent acts of vandalism has spoken out on the incidents, as officials continue their investigation and more details are released.

Five incidents have been reported in total, targeting the current and former homes of New Hampshire Public Radio News Director Dan Barrick and reporter Lauren Chooljian, according to officials.

An unidentified suspect or suspects spray painted their houses in Massachusetts and New Hampshire. Bricks were also thrown at their homes, breaking windows.

Chooljian posted an image of a spray-painted message and a broken window to her Twitter account Tuesday.

On May 21, an unknown person spray painted and threw bricks at the houses of Chooljian and Barrick, one in Melrose and the other in Hampstead, New Hampshire.

In Melrose, a suspect was caught on security cameras as he threw a brick through a window around 10:30 a.m., according to Middlesex District Attorney Marian Ryan’s office. He fled soon after. A message was written on the house in red spray paint: “just the beginning!”

In Hampstead, earlier on May 21, an obscenity was spray painted on a journalist’s garage door and a brick was thrown at the house, according to a story posted on NHPR’s website.

Similar incidents occurred about a month prior. The same obscenity was spray painted in red on the same Hampstead house on April 24, according to officials.

This also happened to homes in Concord and Hanover, New Hampshire. Bricks were also thrown at all these residences, causing broken windows and other damage, according to the NHPR story.

Investigators said they are exploring the possibility that these acts are retaliatory in nature, stemming from recent reporting by NHPR. They could also be aimed at intimidating the journalists, attempting to prevent future reporting, Ryan said in a press conference.

“I would certainly think [Spofford] may be interviewed by the authorities. He may have some information that might support a case. It would be too early to say he would be a person of interest,” Melrose Police Chief Michael Lyle said, according to the NHPR story. “After the article came out, all this trouble started for the reporter or the news organization. At some point [investigators] may have a conversation with him.”

Spofford’s attorneys provided a statement to NHPR, denying any role in the vandalism and suggesting that a past Granite Recovery Centers patient could be trying to “defend” him.

“Not only was I completely uninvolved with these incidents of vandalism, I also do not support or condone them. I also don’t need to vandalize someone’s property. I have truth on my side and I will vindicate myself through lawful means,” Spofford said, according to NHPR.

“I have no motive to vandalize a reporter’s property months after an article was written about me, when I am already expending significant resources to litigate these defamation claims. Many people in recovery have credited me with saving their lives, perhaps one of them felt compelled to do these acts in a misguided attempt to defend me. I would never condone it, but I have no control over what other people do,” he added.

The security footage from Melrose suggests that the suspect is a white man with a slender build, and approximately 5-foot-10-inches tall. He was seen wearing a light blue hooded raincoat, khaki pants, and black sneakers. He also had a blue-green backpack on. More images can be seen on the Middlesex District Attorney’s website.

“We are actively working with our local, state, and federal law enforcement partners to bring those responsible to justice,” said Michael Garrity, a spokesman for the New Hampshire attorney general’s office, in a statement to The Boston Globe.

Anyone with information on the incident is asked to call the Melrose police at 781-665-1212. 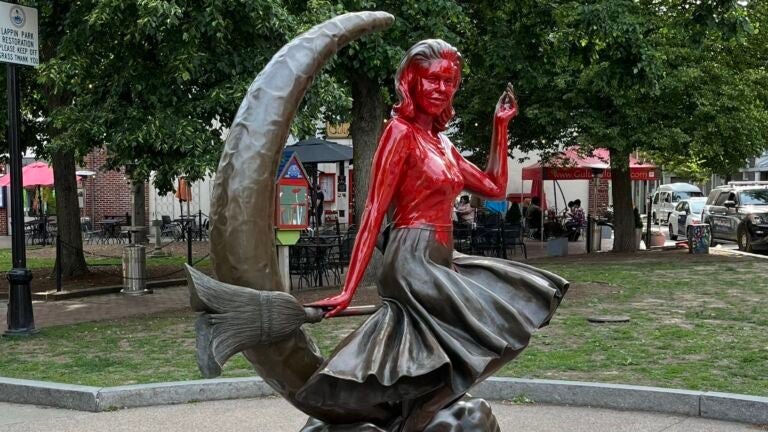