A 911 dispatcher has been fired after a Tops employee trapped inside the Buffalo supermarket during last month’s mass shooting that killed 10 people said she was hung up on.

The Erie County dispatcher was placed on administrative leave last month after Latisha Rogers, an assistant office manager at the Tops supermarket, told the Buffalo News and WGRZ that she called 911 and whispered to the dispatcher in hope of making the official aware of the mass shooting unfolding at the grocery store. But instead of assistance in a moment when she was “scared for my life,” Rogers said the 911 dispatcher dismissed her in “a very nasty tone.”

“The dispatcher comes on and I’m whispering to her and I said, ‘Miss, please send help to 1275 Jefferson there is a shooter in the store,’ ” Rogers told WGRZ. “She proceeded in a very nasty tone and says, ‘I can’t hear you, why are you whispering? You don’t have to whisper, they can’t hear you,’ so I continued to whisper and I said, ‘Ma’am he’s still in the store, he’s still shooting! I’m scared for my life, please send help!’ Out of nervousness, my phone fell out of my hand, she said something I couldn’t make out, and then the phone hung up.”

Erie County Executive Mark Poloncarz told reporters last month that the county’s intention was “to terminate the 911 call taker who acted totally inappropriately not following protocol.” A county spokesman confirmed in a statement that a hearing took place Thursday, at which the dispatcher, whom the Buffalo News identified as Sheila E. Ayers, was terminated after eight years with Erie County’s Central Police Services Department.

“According to the Erie County Department of Personnel, the individual who was the subject of a disciplinary hearing earlier today is no longer employed as a police complaint writer for Erie County effective as of noon today,” the statement reads.

Before the hearing, she told the News she was sorry for what Rogers experienced, while also claiming the Tops employee had changed her story about the 911 call “multiple times.” She asked the public to withhold judgment before more information was available.

“I’m being attacked for one side of the story,” Ayers said.

A spokesperson with CSEA Local 815, the union that represents the dispatcher, did not immediately respond to a request for comment from The Washington Post. Denise Szymura, president of the union, told the Buffalo News it would file a grievance regarding Ayers’s termination.

The announcement comes the same week that Payton Gendron, the 18-year-old charged in connection with the killing, was indicted on 25 counts, including domestic terrorism and murder as a hate crime. Authorities say the alleged white supremacist targeted the Tops supermarket in the largely Black neighborhood because of the hate he harbored for minorities, fueled by an obsession with conspiracy theories that proliferate on the Internet.

Gendron, who police say traveled three hours from his home in Conklin, N.Y., to target Black people with his Bushmaster XM-15 rifle, is believed to have posted a screed online that revealed a paranoid obsession with a racist conspiracy theory claiming White Americans are intentionally being replaced by non-White immigrants.

If convicted of domestic terrorism motivated by hate, Gendron would face an automatic sentence of life in prison without parole.

As the United States is reeling from a recent string of mass shootings stretching from New York to Texas to Oklahoma, President Joe Biden has called on Congress to take immediate action on gun control. In a speech on Thursday, the president called for sweeping changes to the country’s gun laws, including banning assault weapons and limiting high-capacity magazines, following the recent attacks in Buffalo, an elementary school in Uvalde, Texas, and a hospital in Tulsa. The political dynamics in the evenly divided Senate make the odds on those proposals remote.

“I respect the culture and the tradition and the concerns of lawful gun owners,” he said. “At the same time, the Second Amendment, like all other rights, is not absolute.”

There have been more than 200 mass shootings in the United States this year, according to the Gun Violence Archive, a research group. Mass shootings, where four or more people — not including the shooter — are injured or killed, have averaged more than one per day so far this year. Not a week in 2022 has passed without at least four mass shootings.

Rogers had been standing behind the store’s customer service counter when the shooting began on May 14. As she ducked to avoid the gunfire, she called 911 around 2:30 p.m.

“She got mad at me, hung up in my face,” Rogers said of the dispatcher, in an interview with the News. Rogers told local media that she then called her boyfriend and asked him to call 911.

After the news reports on Rogers, county officials began to investigate her allegations about the dispatcher. Poloncarz, the county executive, told reporters in May that Erie County emergency services found the call in question after combing through the 911 calls associated with the mass shooting. They found the alleged actions of the dispatcher to be “completely unacceptable,” Poloncarz said.

New York state law suggests that it remains unlikely that the recording of the 911 call will be released. New York County Law 308(4), a measure that applies to all counties outside of New York City, says that “records, in whatever form they may be kept, of calls made to a municipality’s E911 system shall not be made available to or obtained by any entity or person, other than that municipality’s public safety agency, another government agency or body, or a private entity or a person providing medical, ambulance or other emergency services, and shall not be utilized for any commercial purpose other than the provision of emergency services.”

Rogers told WGRZ last month that she was initially on the fence about the dispatcher losing her job but had concluded that being placed on administrative leave was not enough.

“She was not understanding at all, and she didn’t care and left me for dead,” Rogers said. “I just thank God that I’m here, ’cause I could have died.”

The Washington Post’s Shayna Jacobs and David Nakamura contributed to this report. 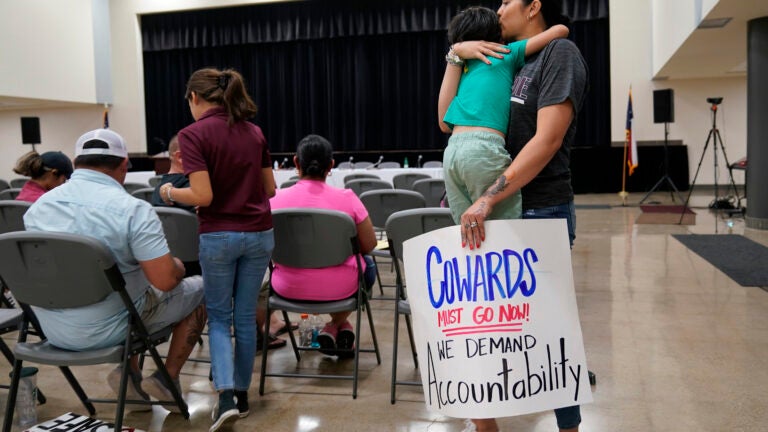