A man was arrested and charged with arson after he allegedly set fire to the Satanic Temple in Salem. Daniel Damien Lucey, 42, was arrested at the scene of the fire on Friday evening, Salem Police confirmed in a release posted Saturday. Lucey is a resident of Chelsea.

Police were called to the scene of a fire at around 10 p.m. on June 10. They arrived at the Satanic Temple, located on Bridge Street, to discover that the front porch of the building was on fire, according to the release. Police officers attempted to use fire extinguishers to put out the blaze, but were unsuccessful. The building was occupied at the time, and subsequently evacuated. Salem firefighters arrived and extinguished the fire.

While the front porch was damaged, no one was injured, police said.

Officers quickly determined that the building was deliberately set on fire. Lucey was allegedly observed pouring flammable liquid onto the porch to start the fire.

Police interviewed Lucey, who admitted to traveling to Salem for the sole purpose of setting fire to the Satanic Temple. Lucey also told police that he considered his actions a “hate crime,” according to the release.

Lucien Greaves, cofounder and spokesperson for The Satanic Temple, posted images from the building’s security cameras on Twitter. They show a man wearing a beige t-shirt with the word “God” on the front approaching the building’s steps and lighting a fire. After starting the fire, the man walked around the block and returned to watch the flames, Greaves told The Boston Globe.

“We will fix it. We will clean it up, air out the smoke, and we will reopen,” Greaves wrote on Twitter. “We are extremely grateful to be in Salem, and a part of the Salem community, which has been nothing but helpful and supportive.”

Lucey remains in custody, according to Salem police. He was charged with Arson of a Dwelling, Civil Rights Violations, and Destruction of a Place of Worship.

The fire’s damage was limited to the porch area, the Globe reported, and the fire was started using an unidentified gelatin-like accelerant.

“People often ask if they’re credible threats, and the fact of the matter is that you just don’t know until somebody shows up,” he said. “I’m always, somewhere in the back of my mind, concerned about this.”

The Salem location serves as the international headquarters for the Satanic Temple, according to the organization’s website. Its mission includes directives to encourage empathy, reject tyranny, and oppose injustice. The group said it does work in various advocacy areas including reproductive rights. It has provided “religious exemption and legal protection against laws that unscientifically restrict women’s reproductive autonomy,” according to the website. 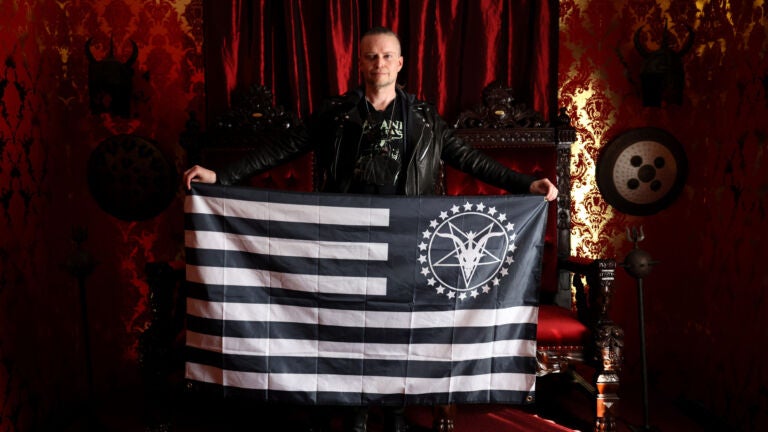