A Dorchester man was arrested for violating a city ordinance after using a bullhorn to protest Mayor Michelle Wu’s administration and for resisting arrest during a community event held by the mayor at a local park on Wednesday.

Shawn Nelson, 43, was arrested after clashing with authorities at Ronan Park, where Wu held a “coffee hour,” a casual event where residents can get free coffee, potted plants, and other goodies and connect with Wu, The Dorchester Reporter reports.

According to the newspaper, Nelson was at the park with a group of protesters who have frequently heckled and harassed Wu in recent months over her administration’s COVID-19 policies.

Around 20 minutes after the event began, the protesters started using bullhorns and started yelling slogans — many of them containing vulgarities — at Wu, the outlet reports.

Police officers had earlier told protesters bullhorns would not be allowed during the event because the permit pulled by the Parks Department only allowed for a DJ for the event and an amplified microphone for public speakers to use, according to the Reporter. Officers warned protesters they would confiscate any bullhorns that were used, although Nelson said police would not take it from him and that they would not touch him, the newspaper reports.

As the chants broke out, officers attempted to separate the protesters from near where the event was happening. As Wu arrived, Nelson yelled into his bullhorn, and started to scream and “flail his arms and kick his feet,” the Reporter wrote.

Officers tried to subdue Nelson, but he tried to grab his bullhorn back from police and turned and started to run in Wu’s direction to try to regain control, as several officers hung onto him, according to the newspaper. Authorities then brought him to the ground.

Nelson refused to walk to a police vehicle after he was handcuffed, and police said they had to carry him to it, the Reporter reports. Nelson is also charged with disturbing the peace.

Afterward, the remaining protesters continued to try to disrupt the event as Wu and City Councilors Frank Baker and Brian Worrell addressed residents, the publication reports. At one point, a group of protesters shouted at a boy and his mother who attempted to have a picture taken with Wu and also yelled at a priest, according to the Reporter.

“Our Neighborhood Coffee Hours are an opportunity to speak directly with residents in our communities and address constituent concerns right away with city staff from many departments present in our parks,” Wu said in a statement to the Reporter. “I’m grateful to the Boston Police Department for their quick actions this morning to ensure our residents could safely enjoy today’s coffee hour at Ronan Park.”

According to WBUR, protesters gathered outside Wu’s home in Roslindale on Wednesday evening, in part to vocalize disapproval of Nelson’s arrest.

Protesters had held demonstrations outside Wu’s home over COVID-19 policies for months earlier this year, but those protests subsided after city officials in April passed an ordinance barring protests outside residences between 9 p.m. and 9 a.m.

Several neighbors asked demonstrators to stop using their megaphones and have a conversation with them, but when the protesters refused to do so, the residents called 911 to launch complaints about the noise, WBUR reports.

Eventually, Boston police Capt. Kelley McCormick, who is also deputy superintendent and commander of Homeland Security for Boston, told the demonstrators a permit is required to use the megaphones and the protesters dispersed peacefully before 9 p.m., according to the news station. 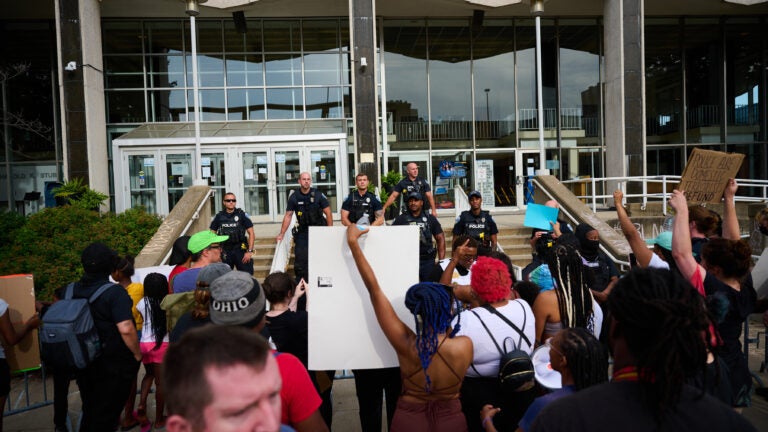