Gov. Charlie Baker has pardoned the two Amirault siblings who were convicted of child sex abuse in the 1980s in the long-questioned Fells Acre daycare case.

Gerald Amirault, 68, and his sister, Cheryl Amirault Lefave, 65, were accused of sexually assaulting over a dozen children at their Malden daycare in 1984, but have always maintained their innocence.

The case has long been controversial because of questionable techniques investigators used to elicit accusations from the children.

Violet Amirault, the siblings’ mother who opened the daycare in 1966, was also convicted in the 1987 trial, and served eight years in prison, GBH reported. She died within a few months of her release.

“The investigations and prosecutions of the Amiraults in the 1980s took place without the benefit of scientific studies that have in the intervening years led to widespread adoption of investigative protocols designed to protect objectivity and reliability in the investigation of child sex abuse cases,” Baker said in a news release about the pardons.

“Given the absence of these protections in these cases, and like many others who have reviewed the record of these convictions over the years, including legal experts, social scientists and even several judges charged with reviewing the cases, I am left with grave doubt regarding the evidentiary strength of these convictions. As measured by the standard we require of our system of justice, Gerald Amirault and Cheryl Amirault Lefave ought to be pardoned.”

The Boston Herald reported that the case began when a 5-year-old boy told his uncle over Labor Day weekend 1984 that “Tooky” had molested him. “Tooky” turned out to be Gerald Amirault, who worked as a bus driver, cook, and assistant director at the daycare.

Amirault was arrested Sept. 5, and the daycare shut down a week later, the Herald reported. The next year, all three Amiraults would be indicted for molesting over a dozen children.

During Amirault’s 1986 trial, jurors heard testimony from 10 parents, including that of one mother. “If only the jurors could spend one day in my house and see how my son acts, they’d know that [Amirault] is guilty,” the Herald reported.

Witnesses also testified that Amirault dressed as a “bad clown” who made children play sick sexual games and abused them in a room he kept locked on the second floor of the Bower Street home that housed the daycare, the Herald reported. Others testified that he took pictures of the children while they dressed and undressed.

Nine children would also testify against Amirault, the Herald reported, but notably, there was no physical evidence of the abuse.

Criticism of the case

Amirault’s defense attorney Frank Mondano argued during the trial that investigators used “coercive techniques” to get other children to describe allegations similar to that of the first boy, the Herald reported.

GBH reported that critics of the case allege that investigators used leading questions to plant false memories in the children’s minds.

The case took place during a time when cases of child sex abuse were skyrocketing, the Herald reported. Some lawyers and psychologists have attributed the rise to the introduction of interrogation techniques that can cause false memories.

In 1995, critics’ accusations were strengthened when The Boston Globe reported that videotapes and transcripts of investigators’ interviews with the children showed the children saying they had not been abused, only to have the interviewer plead and prod them to say they had been abused.

At times, the story said, investigators even offered gifts to the children for giving the “correct” answer.

The state’s parole board voted to release Amirault from prison in 2002, but then-acting Governor Jane Swift declined to commute his sentence, GBH reported. Former Massachusetts Attorney General Martha Coakley also argued against his commutation while serving as Middlesex County District Attorney. Neither provided comment to the news station Friday.

“While I stand behind the decisions made at the time by prosecutors, judge and jury, I believe the Governor’s decision is a fitting end to a very troubled case,” Reilly told the Herald Friday.

Violet and Amirault Lefave were both granted a new trial by a judge in 1995, but Violet’s charges were dropped after she died, and Amirault Lefave reached an agreement with Coakley that reinstated her convictions but kept her out of prison, GBH reported.

The Globe reported that it was unable to reach any of the Fells Acre victims or parents for comment on the pardons on Friday.

What the pardons would mean for the Amiraults

Jamie Sultan, the Amiraults’ lawyer, told GBH that a pardon would have a meaningful impact on the Amiraults’ lives even though they are both out of prison now and have already been damaged by the conviction for decades.

“The Amiraults and their whole family, they live with this — this badge, this stigma of being convicted child sex molesters every day of their lives,” Sultan said.

“Gerald is still on parole now. Thirty-eight years after these charges were brought, he still is wearing an ankle bracelet. He is still subject to extremely stringent parole conditions. He is still polygraphed every couple of months. He can’t travel. He and his wife can’t travel to places that they’ve always wanted to travel to. And he is on the sex offender registry for life because of that unjust conviction.”

It is now up to the Governor’s Council to approve the pardons. It has yet to refuse one of Baker’s pardons, but this is by far the most high-profile and controversial pardon to come before it.

Visit Democratic Sen. Sinema has registered as an independent 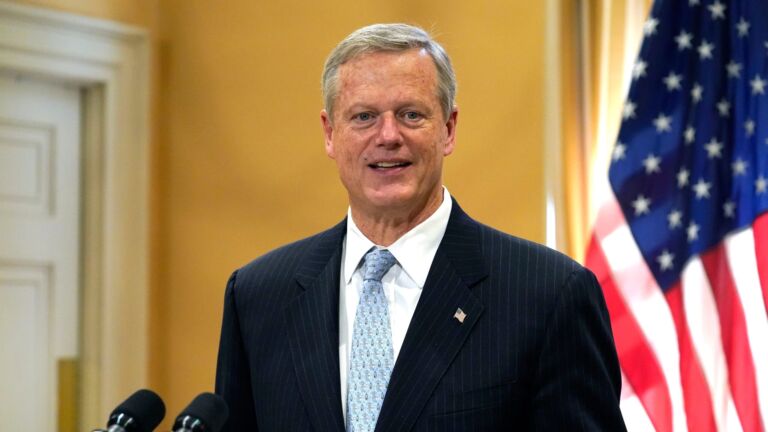