A Reading police officer who was charged with manslaughter for the 2018 shooting of an unarmed man was acquitted Monday.

In 2018, Officer Erik Drauschke shot and killed 43-year-old Alan Greenough in a junkyard. At the time, Greenough had smashed furniture and thrown things at officers, but was unarmed.

The Boston Globe reported that a Middlesex Superior Court jury deliberated for about eight hours over the course of two days before finding Drauschke not guilty.

Drauschke was indicted in 2020 by the Middlesex District Attorney’s Office after an independent judge reviewed the case and rejected Drauschke’s claim that he was facing a deadly threat when he shot Greenough. This came after years of pressure on the DA’s Office from Greenough’s family to investigate the shooting.

Drauschke is the first police officer to be charged criminally for an on-duty killing in Massachusetts in the last 30 years.

Drauschke had over two dozen supporters in the courtroom Monday, including his wife, the Globe reported. When the verdict was read, they gasped, clapped, and broke into tears.

“We’re grateful for the jury considering the evidence and finding what we found is the right verdict,” Drauschke’s lawyer, Kenneth Anderson, told the Globe.

“We just question kind of why we’re here to begin with. There’s certainly cases that there are police officers whose conduct should be questioned, but we don’t feel this is one of those cases, and we’re glad that finally he was vindicated after four long years.”

Greenough’s mother, Catherine Rawson, and brother, Anthony Perrotti, did not publicly react to the verdict, the Globe reported. But their civil attorney, Victor Koufman, told the newspaper that the family continues to grieve their loss.

“While the family is extremely disappointed with the verdict, they respect the jury process and thank the jurors for their service,” Koufman said in an e-mail.

“Mr. Drauschke’s actions on February 3, 2018, were unprofessional and reckless. Had he waited for his colleagues to arrive at the vehicle where Alan was huddling, the matter would have been resolved without bloodshed. Alan should not have died.”

Koufman told the Globe the family hopes the Reading Police Department won’t see this as a victory for law enforcement.

“Rather, police officers should use this horrible case as an opportunity to improve their methods when responding to a crisis,” he wrote.

Drauschke had been on the force for 11 years and was 36 years old when he shot Greenough. That day, he and other officers were at an apartment attached to East Coast Gas and Auto Repair at 1462 Main St. in Reading to arrest Greenough for domestic battery and assault of his roommates.

Drauschke spotted Greenough in a red Hummer in the junkyard and opened the door. When Greenough got out, he allegedly kept his hands in his sweatshirt pockets and refused to take them out.

During the trial, prosecutor Brant made the case that Drauschke should’ve waited for other officers on scene to provide back-up before confronting Greenough. He also argued that because Greenough was unarmed, there was no threat that would necessitate shooting him.

Attorney Anderson countered that Drauschke responded the way any police officer would, and that his actions were consistent with his training. He also painted Greenough as someone dealing with drug addiction and said he repeatedly refused to follow police commands.

“You have to put yourself in the place of a police officer in a rapidly changing, intense, dangerous situation,” he told the jurors.

Reading Police Chief David Clark said Monday evening that Officer Drauschke will be reinstated at the Reading Police Department, but that they aren’t sure when he will return to work.

Clark also released a statement on the verdict:

“The decision to use deadly force against a human being is the most difficult moment in the life of any police officer, I know that Officer Drauschke will carry the burden of having made that choice,” Clark said.

“This is a solemn moment, regardless of the verdict, and I would like to thank the jury for their thoughtful consideration of the facts in this case. I also offer the collective condolences of the men and women of the Reading Police Department once more to the family of Alan Greenough for their loss.” 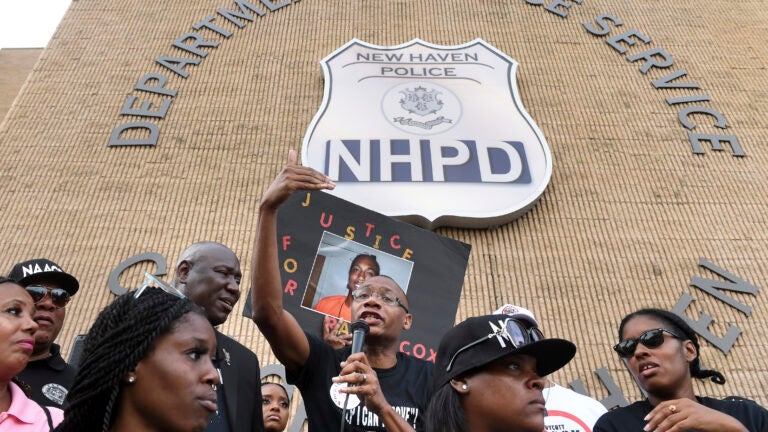