And the 19-story Center for Computing & Data Sciences is just as interesting on the inside, from its whiteboard walls to its groundbreaking geothermal system.

BU will celebrate the building’s opening on Thursday, marking the end to a three-year, $305 million project.

“This is the most prominent piece of property we have on the Charles River,” BU President Robert Brown told The Boston Globe. “We talked about something distinctive. I think we got it.”

The intent was to design a building that was an icon, both for the university and for Boston, KPMB Architects partner Paulo Rocha, the design lead, said in an interview with BU Today.

“It’s a pretty dynamic building,” Rocha said. “It’s playful. It’s not lockstep, it’s not what people are used to.”

Here are five of the building’s most notable features:

Those zigzagging blocks? They serve a functional purpose.

“We think of the new building as a ‘vertical campus,’” the university’s website notes. “That’s because the departments will be arranged like ascending academic neighborhoods.”

Departments are stacked on top of one another — mathematics and statistics on the lower floors, computer science in the middle, the Rafik B. Hariri Institute for Computing and Computational Science & Engineering on the top floors, and so on and so forth, according to BU.

“The building is interconnected with stairs, from the lower level to the 17th floor. Most people won’t walk the whole building, but they will walk two or three floors,” Rocha told BU Today. “It gives the departments, and there are five departments in the building, a little bit of identity, by creating this movement in the building that gives it a dynamic presence.”

Drawing on the walls? It’s encouraged.

With a theme of collaboration in mind, the building includes plenty of whiteboard walls to encourage scribbling and turn hallway conversations into brainstorming sessions, according to BU’s website.

Other design features help foster small-group interactions, including a central atrium with a series of terraced platforms and a ramp dotted with small gathering spaces, the university noted.

“We put a lot of emphasis on spaces of collaboration, where people interact,” Rocha told BU Today.

The new tower may be close to the banks of the Charles River, but architects took careful steps to ensure it wouldn’t be in danger of serious flooding, according to BU.

The building is also 5 feet higher than the City of Boston’s suggested design guidelines for sea level rise, the university’s website notes.

What you won’t get that new building smell

Don’t expect the state-of-the-art building to actually smell like a new building.

“In an effort to reduce the amount of chemicals and compounds in the air, we chose sealants and finishes for the building that have low or no volatile organic compounds,” BU explained on its website.

The data sciences center will be totally free of fossil fuels, instead relying on geothermal wells for heating and cooling. External shades and triple-glazed glass windows will help boost insulation, BU noted.

All of the building’s electricity has been secured through a long-term deal with a wind farm in South Dakota, the Globe reported. The tower will be the largest net-zero carbon building in Boston, and possibly in New England, according to the newspaper.

The building officially opens in January. 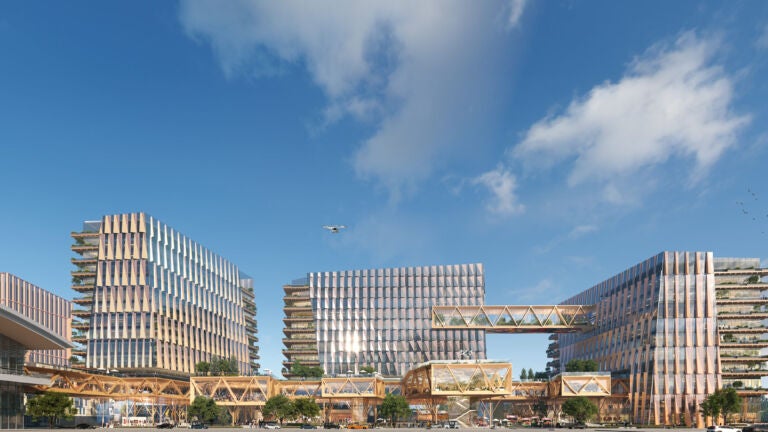