A former UMass Memorial Health Care employee has reportedly been identified as being at the U.S. Capitol the day before Wednesday’s violence when thousands of rioters attacked in an incident that left one officer, one protester, and three other people dead.

The woman, Therese Duke, was identified by her daughter after a video of her being punched outside the Freedom Plaza in D.C. was filmed and went viral Tuesday, a night before the Capitol siege.

“Hi mom remember the time you told me I shouldn’t go to BLM protests bc they could get violent,” Helena Duke tweeted alongside the clip on Thursday, adding, “this you?”

Helena Duke identified her mother, her aunt Annie Lorenz, and her uncle Richard Lorenz in the clip as those included in a group of Trump supporters confronting a Black woman. The video shows Therese Duke appearing to grab at the woman, who responds by punching Duke. Another clip shared after the incident shows Duke with a bloodied face.

A LinkedIn profile for Therese Duke marks UMass Memorial Health Care as her employer, and Helena Duke also confirmed in Twitter replies that her mom worked for the medical center.

The Black woman, who identified herself as Ashanti and is now facing criminal charges, detailed the Tuesday incident on a GoFundMe page she created to help with legal fees: “A video has surfaced where I was surrounded by a group of Trump extremists, and I honestly feared for my life. The video makes me look like I am the aggressor, but it does not show what happened prior to my defending myself.”

“People shoved me, tried to take my phone and keys, yelled racial epithets at me, and tried to remove my mask,” she said in her GoFundMe. “I asked them to social distance and stay out of my personal space due to COVID. They refused, and I was afraid of being hurt and harmed. After being assaulted, I defended myself.”

Stunned to see her mom playing a part in the interaction, the 18-year-old Helena Duke told BuzzFeed News she decided to make it known.

“Hi this is the liberal lesbian of the family who has been kicked out multiple times for her views and for going to BLM protests to care what happens to me,” Duke tweeted on Thursday before naming her family members.

Hi this is the liberal lesbian of the family who has been kicked out multiple times for her views and for going to BLM protests to care what happens to me so:
Mom: Therese Duke
Uncle: Richard Lorenz
Aunt: Annie Lorenz pic.twitter.com/cuBAPJ3GJA

BuzzFeed reported that it’s still unclear whether Duke’s family members were also at the Capitol during Wednesday’s attack.

On Friday, UMass Memorial Health Care in Worcester said it had launched an investigation to determine if one or more of its employees were involved in the insurrection.

“We have been made aware that one or more of our employees may have been involved in the violence that took place at our Nation’s Capitol,” the state’s third-largest health care provider said in a statement. “We strongly condemn such behavior, if true, and have initiated an investigation.”

Soon after, healthcare officials said the caregiver in question was no longer with the organization.

“Over the past 24 hours we have received numerous expressions of concern through social media regarding a UMass Memorial caregiver who may have been involved in this week’s violent events at the nation’s capitol,” the provider wrote. “The employee in question is no longer a part of our organization.”

UMass Memorial did not immediately respond to a Boston.com request for comment and has not yet confirmed Therese Duke’s identity as the employee in question.

US Attorney Andrew E. Lelling said any Mass. residents who partook in storming the U.S. Capitol Building with “the intent to commit such crimes” on Wednesday will be prosecuted.

In Somerville, Mayor Joseph Curtatone tweeted Saturday that the city is looking into reports that Jessica Turner, a board member of a local affordable-housing trust fund, was in Washington earlier this week and at one point tweeted “We have breached the steps.”

An appointed official in Somerville was part of the Jan. 6th attempted coup, and was part of the group that charged the barricades. Why is this person on the Affordable Housing Trust Fund? @KristenEStrezo @JoeCurtatone @MbahCouncilor @JTforWard2 @BenForWard3 pic.twitter.com/WLbXobStZ4

“To all who’ve been asking this question,” Curtatone wrote, “We share your concern. We’re taking it seriously and doing our due diligence. Will have more information soon.”

To all who’ve been asking this question. We share your concern. We’re taking it seriously and doing our due diligence. Will have more information soon. https://t.co/OCfZwiv60V

Turner told the Boston Globe over the weekend that while she attended the protest, she didn’t approach the Capitol, and that she disagreed with the rioters’ actions.

“That behavior is stupid,” Turner told the newspaper. “And what they did was stupid.”

Turner also talked to WCVB, telling the news station, “You had this group of people who peacefully protested, and it was hijacked by people who got into it and ended up doing some really bad stuff.”

Elsewhere in Massachusetts, David Ross, a 33-year-old Pittsfield man, was among the many arrested in connection with the riot.

He was arrested by the Metropolitan Police Department and charged with unlawful entry, and violating the curfew set in Washington, D.C. for that evening. After pleading not guilty on Thursday, according to court documents obtained by Boston.com, he was released and scheduled to return to court on June 10.

This post has been updated to include Jessica Turner’s comments to the Boston Globe and WCVB. 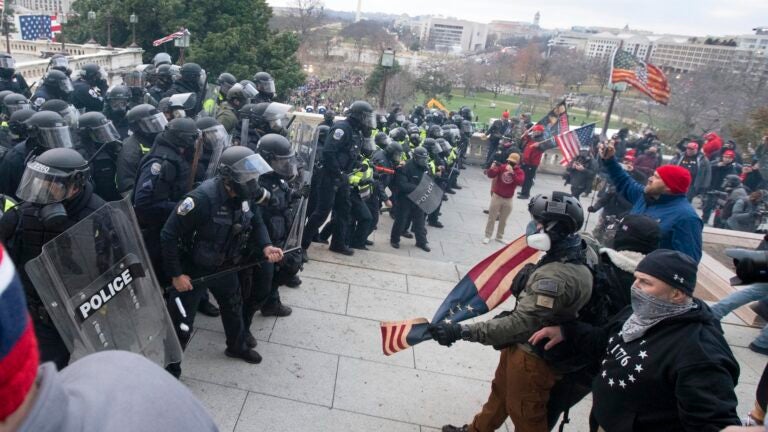