WASHINGTON – House managers said Thursday that if senators do not convict Donald Trump and prevent him from running for office again, the former president could incite more violence in the future. The argument came on the third day of an impeachment trial in which Democrats have charged Trump with “incitement of insurrection” for his role in the Jan. 6 violent takeover of the Capitol.

On Wednesday, the managers used surveillance footage from the Capitol, along with Trump’s own words and tweets, to try to build a case against him. Trump’s attorneys are scheduled to begin their presentation Friday and use only one of two allotted days. A verdict could come as early as the weekend.

OnThursday, Rep. Jamie Raskin, the lead impeachment manager, argued that former president Donald Trump had demonstrated a pattern of encouraging violence among his supporters long before the Jan. 6 riot at the Capitol.

“These tactics were road-tested,” said Raskin, D-Md. “January 6th was a culmination of the president’s actions, not an aberration from them. The insurrection was the most violent and dangerous episode so far in Donald Trump’s continuing pattern and practice of inciting violence.”

Raskin showed clips of Trump comments encouraging supporters to rough up protesters at his early campaign rallies, including one in which he offered to pay the resulting legal fees.

Raskin also walked senators through other episodes, including Trump’s praise of Republican Greg Gianforte – at the time a Montana congressman, now the state’s governor – after he body-slammed a reporter in 2018, as well as his statement that there were “very fine people on both sides” at a 2017 gathering of white supremacists in Charlottesville, where a counterprotester was killed.

Trump showed no genuine remorse and failed to take responsibility for his role in inspiring the rioters who attacked the Capitol, said Rep. Ted Lieu, D-Calif.

He urged senators to send a clear message with a vote to convict Trump to prevent another attack and deter future presidents, who don’t like the outcome of an election, from believing they can follow Trump’s lead.

“You know, I’m not afraid of Donald Trump running again in four years. I’m afraid he’s going to run again and lose, because he can do this again,” Lieu said.

Lieu played recordings and displayed quotes from Republican state officials and former Trump administration officials condemning and blaming Trump for riling up the rioters on Jan. 6. Among the voices were Trump’s former chief of staff Mick Mulvaney and his former Labor Secretary Elaine Chao, the wife of Senate Minority Leader Mitch McConnell, R-Ky. He showed photos of the more than a dozen Trump officials who resigned in protest on Jan. 6.

Senators were also reminded that it took Trump nearly 30 hours after the attack began to denounce the violence and of the delayed deployment of the National Guard to the Capitol.

“As a veteran, I find it deeply dishonorable that our commander in chief did not protect us,” Lieu said.

During his presentation, Lieu seemed to call out Sen. Mike Lee, R-Utah, when he rejected the idea that Trump had made a mistake on Jan. 6. In an interview before the Senate trial began, Lee suggested Trump should get a “mulligan” or second chance for making a mistake.

The mob that stormed the Capitol on Jan. 6 was taking orders from Trump and would not have showed up if not for his encouragement, House Democrats said on the third day of the former president’s impeachment trial.

“The attack was done for Donald Trump, at his instruction and to fulfill his wishes. Donald Trump had sent them there,” Rep. Diana DeGette, D-Colo., told senators.

In a series of videos and social media posts, DeGette tried to illustrate how insurrections responded to Trump’s Jan. 6 speech and echoed his message as they violently attacked the Capitol, chanting “fight for Trump!” and “stop the steal!”

DeGette rejected the argument from Trump’s defense team that the rioters were acting on their own. She displayed a series of court records and media reports in which the insurrectionists say they were taking orders from Trump, their commander in chief.

Court documents show that more than two dozen people charged in the attack specifically cited Trump and his calls to gather that day in describing why they decided to take action by coming to Washington.

“We know who lit the fuse,” DeGette said. “They came because he told them to.”

There was little indication that most Republican senators would change their minds and vote to convict Trump. Many are holding on to the argument that a former president cannot be impeached.

The impeachment charge against Trump alleges that he “willfully made statements that encouraged — and foreseeably resulted in — imminent lawless action at the Capitol.” 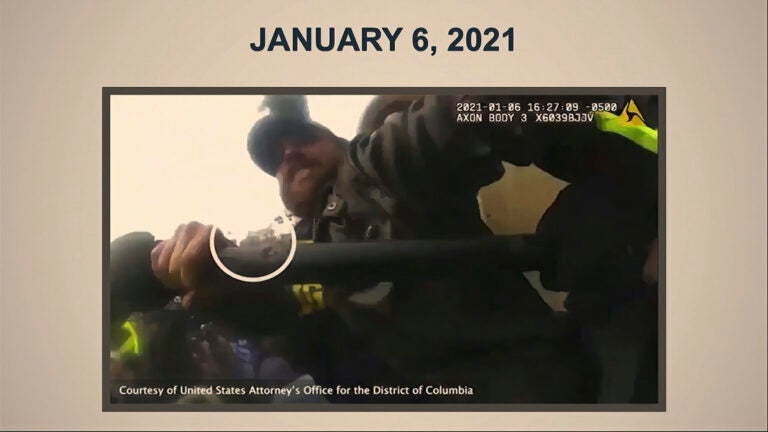