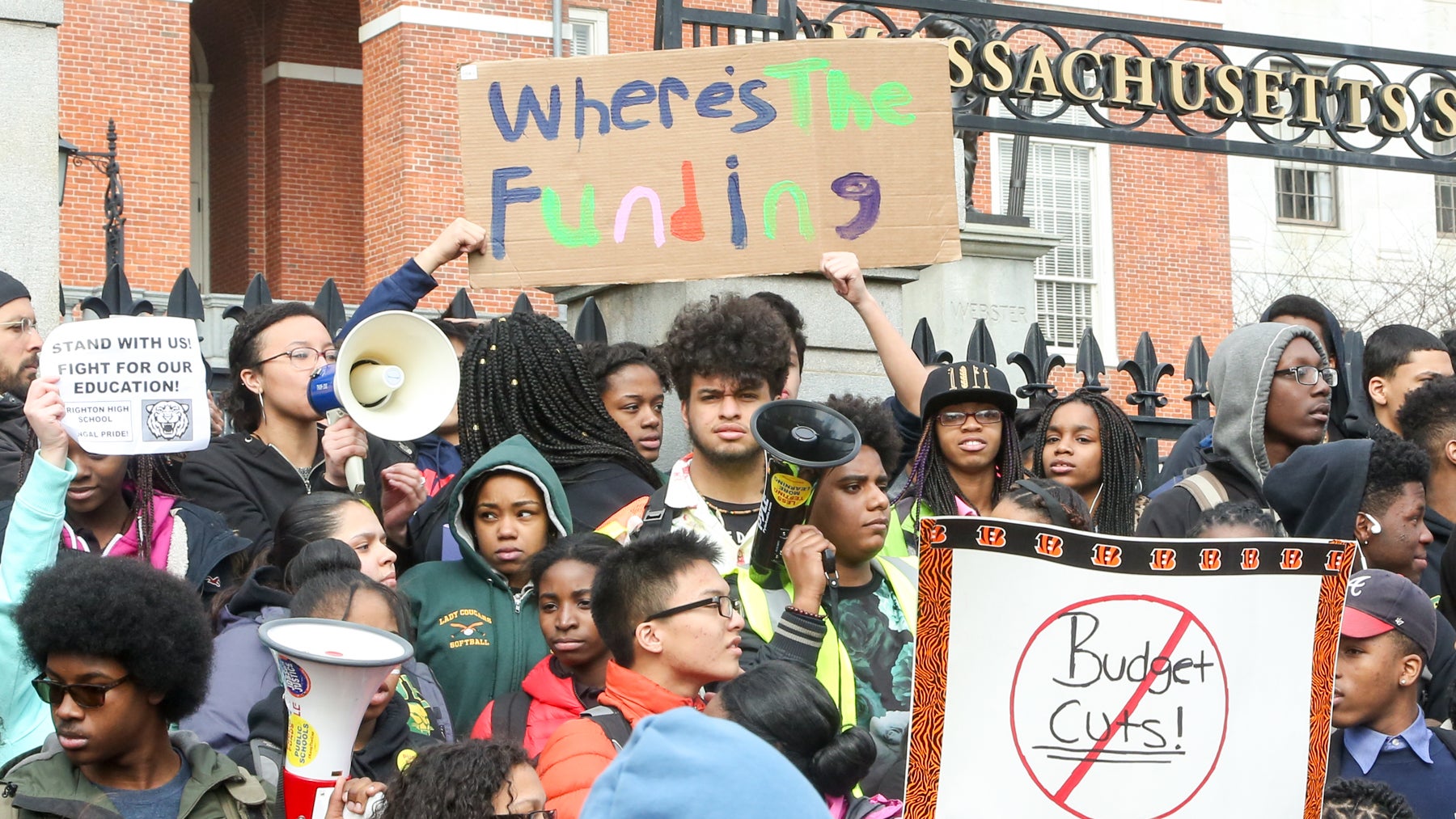 Jahi Spaloss, one of the main organizers, stands directly under the “Where’s The Funding?’’ sign.

Hours before more than 3,500 of their peers would march out of their classrooms toward Boston Common, a small group of high schoolers was glued to a group chat on their phones. It was 3 a.m., and they needed to make sure everything was ready for the district-wide protest they’d spent the past week organizing.

Were the posters finished? Yes. Was the meeting place finalized? Yes. Did they all promise that, no matter what, they would leave their classrooms at 11:30 a.m.?

“There’s this stereotype that young kids don’t know what we’re doing and should let adults handle things because it’s their fight more than ours,’’ said Jahi Spaloss, a senior at Boston Green Academy. “But we’re the ones in school. This fight is ours.’’

Ever since thousands of high schoolers marched through the streets of Boston on Monday to protest impending public school budget cuts, some city officials — including Mayor Marty Walsh — have claimed that such a massive form of social unrest couldn’t possibly have been organized by a bunch of kids. Some officials have even claimed the protest was actually organized by unions working behind the scenes. But the students are adamant: It was their idea, and their idea alone.

The notion of a walk-out was hatched on Feb. 27, when three sophomores at Snowden International High School attended a leadership conference at Harvard University and felt inspired after they learned about successful college protests against racism and sexism.

“We knew that all the schools in the district would be impacted by the budget cuts,’’ said Jailyn Lopez, a sophomore at Snowden who helped organize the protest. “We knew at our school that we might lose foreign language programs and teachers we liked. We decided to do something about it.’’ 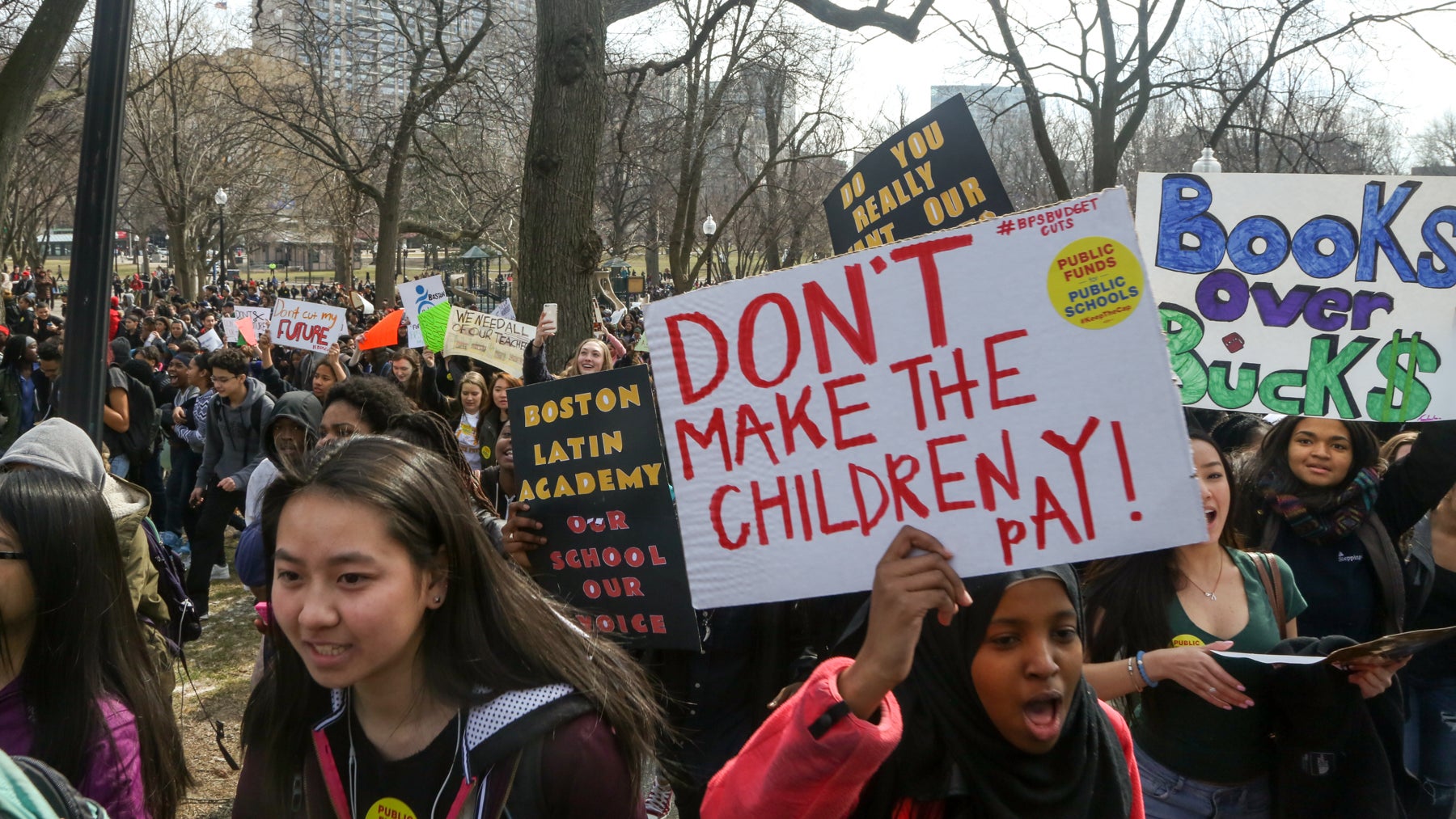 Their first step was writing a letter explaining the budget cuts, which they posted to Twitter, Facebook and Instagram on Feb. 29. In the letter, they warned: “Your school will have less extra-curricular activities, if any at all. If students are engaged in school, there would be less cracks for our youth to even look towards violence. We have lost too many young lives already.’’

Their message resonated with Spaloss, who wanted to get involved in part because of the 87 percent of the city’s public school students who are minorities. Without extracurriculars or arts programs, he said, students in poorer areas of the city are in danger of getting sucked into gang violence.

“They walk past and see 40-year-old people doing drugs on the street like they have been since they were 16 because no one pushed them or stood up for them,’’ he said. “And if that’s all they know, they can get trapped into that lifestyle. That’s why it’s so important to invest in education. We need people to believe in us and the people we can be.’’

The letter also inspired Brian Foster, a senior at Excel High School in South Boston. He contacted student members of the Boston Area Youth Organizing Project to ensure that the demonstration was as peaceful as possible.

“We knew that a lot of the kids protesting were new to it,’’ Foster said. “They wouldn’t know what their rights or how to interact with authorities.’’

A handful of students from across the district, including the members of Snowden’s student government, as well as Green and Spaloss, met on March 3 to discuss the best ways to organize. At that point, they had two separate Facebook events promoting the walk out, each with a different meeting point. They needed to put their heads together to ensure there would be no confusion.

Beginning Friday afternoon, Spaloss and the other students worked around the clock to determine a meeting point and a walking route, as well as chants to “get students’ blood flowing.’’ They met up a few times over the weekend and communicated constantly over group texts. Some nights, they stayed up until 4 in the morning to plan.

Over the weekend, the district sent out a series of robocalls and texts to inform parents that students would be marked absent if they walked out of class. But that only increased the students’ determination.

“It gave us more motivation,’’ Lopez said. “This was something we organized and we felt like people were trying to discourage us from standing up for what we believed in. And after all the calls, we felt like even more people knew about it and wanted to stand up for their schools too.’’ 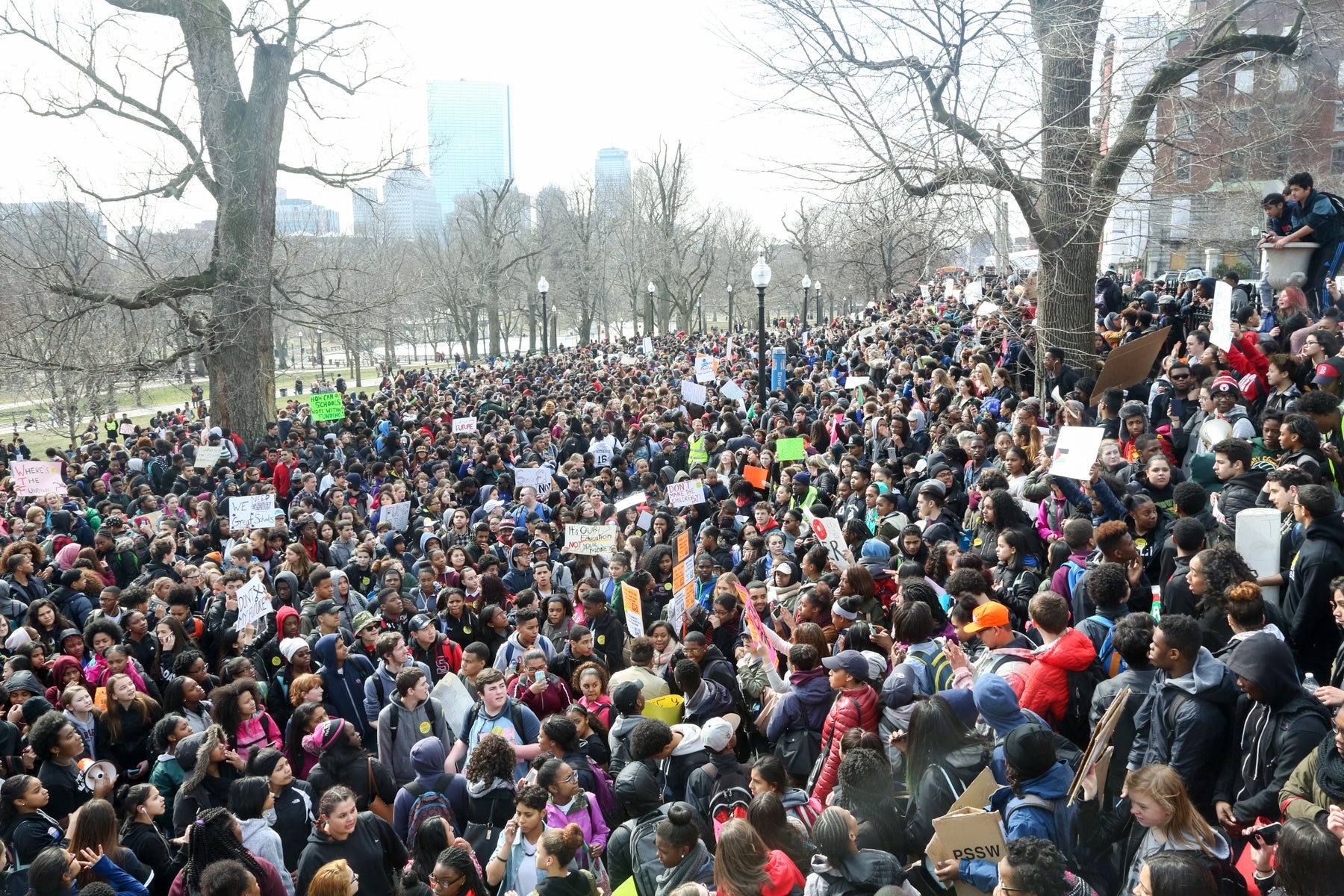 The area in front of the State House was so packed students could barely move.

At 11:30 Monday morning, the mobilization began.

Students from grades 6 through 12 stood up and walked out of their classrooms, chanting: “They say cut back, we say fight back,’’ and “What do we want? Education!’’

In the end, more than 3,600 students flooded the streets, a number that amazed even the organizers themselves.

Afterward, Mayor Walsh said he’d like to find out who organized the protest and hoped the adults behind it “start to feed the young students in our city with accurate information.’’

Over the course of the weekend, the students did reach out to an advocacy group, the Boston Education Justice Alliance, to ask for posterboard and markers (and snacks). Another education advocacy group,the Alliance to Reclaim Our Schools, has also posted photos of the protest on its website, but student organizers said they had no contact with them.

“AROS did not organize that event in any way, despite statements in the Boston media to the contrary,’’ the alliance’s director, Keron Blair, said in a statement. “We feel sorry that adults sometimes cannot give credit to the young people who are often leading the way in planning and carrying out huge, strategic and constructive campaigns for the schools all our communities deserve.’’

Adult allies in the Boston area created an online petition to show their solidarity after learning about the demonstration and sent out a flyer detailing ways adults could support students, said Marlena Rose, the Boston Education Justice Alliance’s coordinator. The flyer suggested that adults testify at the State House hearing on whether to lift the cap on charter schools. 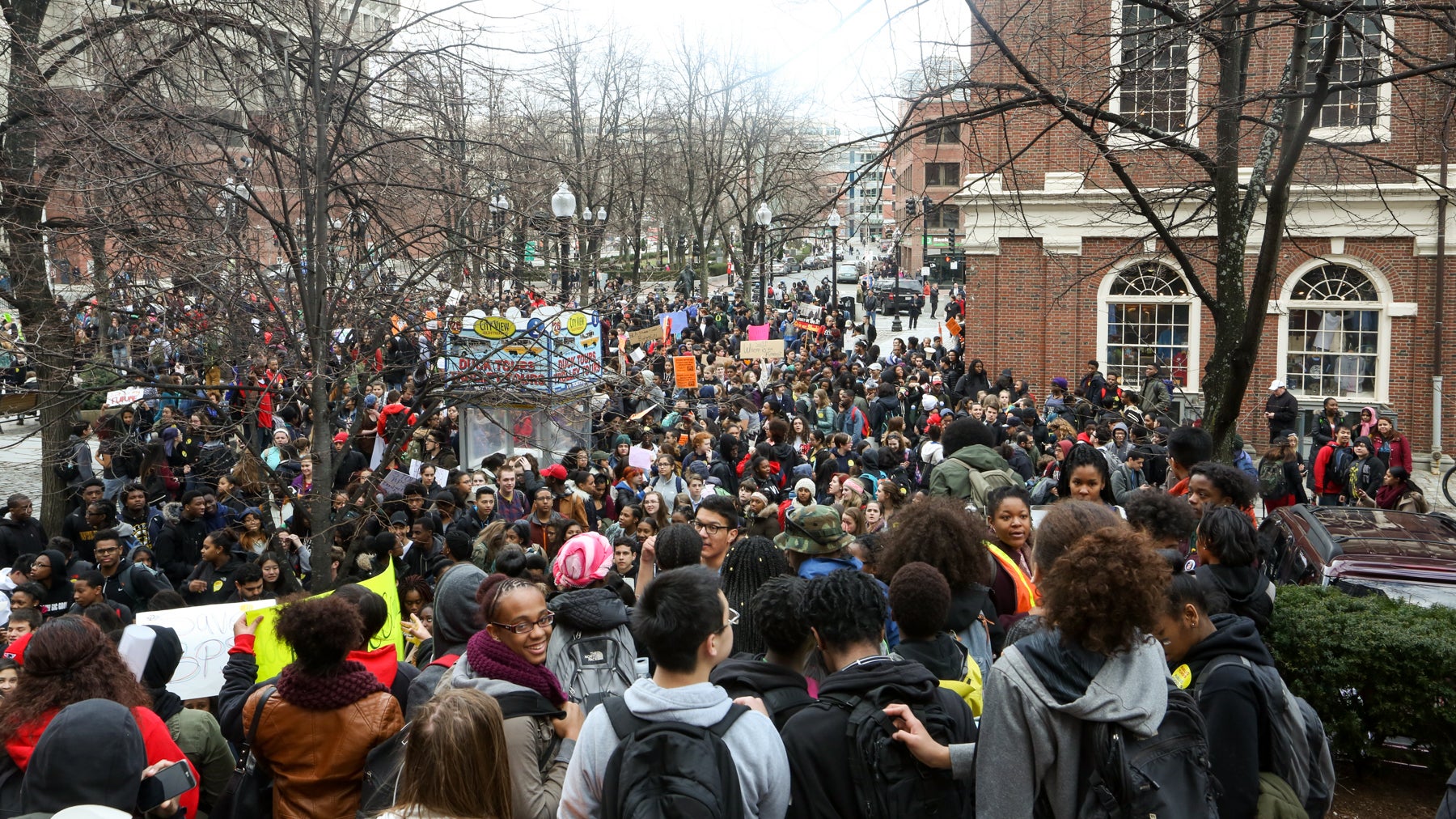 The protest ended at Faneiul Hall. The students hoped to speak to Mayor Marty Walsh and Gov. Charlie Baker, who were giving an unrelated press conference inside.

Some students also left the protest to testify, which is why some people criticized anti-charter groups as influencing them. But student organizers said the issues are interrelated.

An early document released by Boston Public Schools said the decline in state aid for education “is in part because the public charter tuition reimbursements required by law are being increasingly under-funded.’’ The document said this disparity translated into a $18.6 million shortfall in 2016.

In a speech the day after the protest, Mayor Walsh called the state’s reimbursement system “broken.’’ But he also told The Globe that, though other city departments are suffering because of the lack of reimbursements, the school budget is not because his administration makes education a top priority.

But Foster said the students don’t feel as if that’s true — which is why they decided to take a stand.

Mayor Walsh later backed down from his earlier comments and commended the students for using their voices in a statement to Boston.com.

“I commend the students at Snowden International High School and students across the district for being passionate about our school system and letting their voices be heard this week,’’ he said in the statement.

The students say their fight isn’t over yet. City officials should expect to hear more from them in the coming weeks, until the city’s school committee votes on the budget March 23.

“We’re not done,’’ Foster said. “We’re ready to fight for what affects our city. I hope they’re ready to listen.’’ 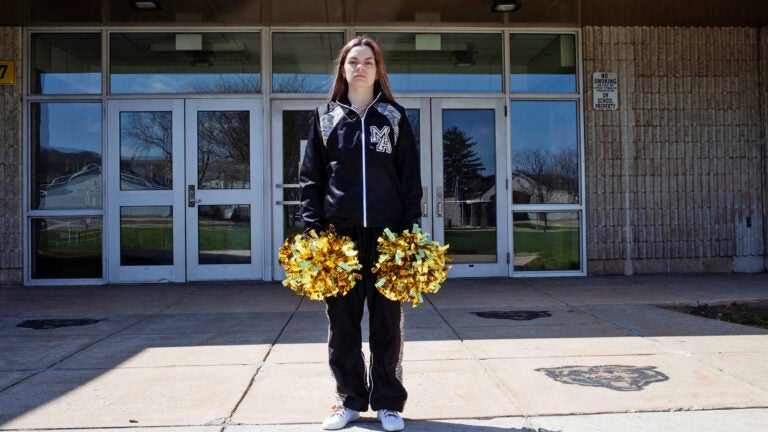