From the White House podium to harried homes, pressure is building to reopen the nation’s schools. But the next iteration of American education will look far different from the classrooms that students and teachers abruptly departed last month.

Many overwhelmed school systems remain focused on running remote education that was set up on the fly. Others, though, are deep into planning for what they see coming: an in-between scenario in which schools are open but children are spread out in places where they are normally packed together.

The new landscape could include one-way hallways, kids and teachers in masks, and lunch inside classrooms instead of cafeterias. Buses may run half empty, and students may have their temperatures read before entering the building. And in districts all over the country, officials are considering bringing half the students to school on certain days, with the rest learning from home. Then they would swap.

“Our students need some kind of normalcy,” said Michael Hinojosa, superintendent of the Dallas Independent School District. “Right now, their whole world has been disrupted with things that they’ve never dealt with before, and they need to be around other people.

Many teachers are scared of going back too early, and teachers unions are cautioning against it. Health experts warn that even if covid-19 cases abate, a second wave of infection could arrive with flu season later this year. And while many parents are eager to end the national experiment in remote education, others are terrified that any return to school would expose their children to a deadly disease.

But pressure is building. President Donald Trump has pressed to reopen the economy, and one key to a functioning workforce is a school system that allows parents to do their jobs. Conservative activists have protested stay-at-home orders in several states, with Trump’s encouragement. Several states are starting to reopen some businesses, with more planned in May.

Many educators, too, are eager to get students back, having concluded that remote education is far less effective and may leave lasting academic damage. They also fear for the safety and well-being of students who rely on schools for food, health care, social services and emotional stability.

The people who most want to return to school may be the students themselves.

“I want to go back so bad,” said Zoe Davis, 16, a sophomore at Chalmette High School in Chalmette, Louisiana. Unlike some others, she has a computer and internet access, and has been keeping up with her classes at home. But she said learning over Zoom is far from ideal, and she misses bonding with classmates over school activities, like the dance team.

Forty-three states plus the District of Columbia have ordered or recommended that schools remain closed this spring. Districts remain unsure whether they will be allowed to run in-person summer school.

White House guidelines call for schools to reopen in a second phase of recovery, after symptoms and cases of covid-19 in a state or region have been on the decline for at least two 14-day periods. Further guidance being finalized offers detailed suggestions such as keeping children together in one group, spacing desks six feet apart, closing or limiting use of cafeterias and playgrounds and spreading out children on buses – all ideas that are already under consideration by school districts across the country.

Rural areas with few covid-19 cases are likely to open first. Last week, Montana Gov. Steve Bullock, D, said his state’s schools could begin reopening in May. But most school leaders are looking toward next school year.

Hinojosa said that Plan A, for Dallas schools to open Aug. 15 under normal conditions, is unlikely. So he’s considering a schedule in which some students attend school in person on Mondays and Wednesdays and others on Tuesdays and Thursdays, with everyone remote on Fridays. He said lunches would probably need to be in classrooms to avoid large groups, and he is reconsidering sports.

“In Texas we have two sports – football and spring football,” he joked. He suggested replacing tackle football with flag football, though plenty of spit and sweat are exchanged in that sport, too. Perhaps more realistically, he raised pushing the season back. A decision will need to be made soon, with summer practices scheduled to begin in July, he said. “This is just around the corner.”

In Montana, the state recommended districts consider a mix of in-person and remote learning, and some are planning just that, a spokesman said.

Washington, D.C., schools are considering partial openings, first bringing back younger students learning to read, or perhaps seniors, to keep them on track to graduation.

Minnesota state guidelines recommend turning desks to face the same direction and hand washing when entering and leaving the classroom. In Miami, officials are looking to schedule lunch in multiple shifts and smaller groups for physical education.

California Gov. Gavin Newsom, D, last week suggested reducing group activities like meals, physical education and recess, and staggering start times. He said he was beginning to talk with school officials about how to make it work.

In San Diego, opening in the fall would require staggered start times and reconfigured classrooms to allow for social distancing, said Howard Taras, the district’s physician. In some high school classes, he said, students with the same schedule could be grouped together, with teachers instead of students rotating between rooms to reduce hallway traffic.

He said teachers and students may need to wear masks while at school, and the district will have to ensure that personal protective equipment is available. Teachers, students and staff may have to routinely be tested for coronavirus. And he said that the district may need to run buses half-full to spread out students on board, which means adding more trips. That would be expensive, at a time when state and local governments are bracing for budget cuts.

“I can see this as a scheduling nightmare,” Taras said. He said the district will “need a supercomputer” to iron out the details. “But those are the kinds of solutions that we may have to resort to.”

In New York City, the nation’s largest district, there may be a combination of remote and in-person learning, or staggered starts, said Edie Sharp, chief of staff for the city schools. Her team is also studying other countries’ approaches, including certain Chinese provinces, which first brought back students closest to graduation, and Denmark, which began with the youngest.

“There are arguments on either side,” Sharp said. “Some of the research on what we see on younger grades and learning loss is really, really compelling. On the other side, graduating seniors are very anxious about pathways to high school completion.”

Amid the planning, there’s plenty of skepticism. Parents, teachers and administrators fear political pressure will force a return before it is safe. Some dismiss the social distancing ideas under consideration as a joke, saying it would be nearly impossible to prevent virus transmission in a school.

“What I’m really worried about is this false sense of safety,” said Andrea Smith of Haverford Township, Pennsylvania, a suburb of Philadelphia, who has a son in second grade and a daughter in nursery school. Even with fewer students in a school, she said, “it just takes one person” who is sick to infect others.

Mae Winter, who has a kindergartner and a fifth grader in Seminole County Public Schools in Florida, is considering putting her children into the county’s virtual charter school in the fall. Her husband is immune-compromised, and she questions whether there is any safe way to bring hundreds of children and adults back into a school.

“How do I send a kid to a school with 700 other children and so many faculty, staff, teachers, aides, volunteers in and out, and still ensure that his exposure is minimal to none? I can’t. It’s impossible,” she said.

In the days before schools closed last month, some districts saw attendance plummet. None of the measures being discussed will work without community buy-in, said Michael Casserly, executive director of the Council of Great City Schools, a nonprofit coalition of 76 of the nation’s largest urban public school systems, which is studying these options.

“Public confidence may not be there yet,” he said. “We don’t want to open them and people get sick or nobody shows up or some of both.”

Teachers unions played a major role in pressuring schools to close across the country, including in New York City, where Mayor Bill de Blasio, D, resisted closing schools before changing course. To date, the United Federation of Teachers counts at least 52 teachers and teacher aides who have died of complications of covid-19, out of the 120,000 employees it represents in New York.

Now, the union is warning about a return to the classroom. An online petition it created lays out a list of demands before schools should reopen. It garnered more than 53,000 signatures in its first few days.

It won’t be safe to reopen until there is “massive and accurate” testing, as well as contact tracing and isolation for those who are infected, said Lily Eskelsen García, president of the National Education Association, the country’s largest union. She is frustrated by what she sees as inappropriate pressure from Trump and worries it will lead to bad decisions. “We need evidence it’s safe for those kids to go back.”

Jami Cole, a third-grade teacher at a school outside of Oklahoma City, gets choked up thinking about the students she has not been able to see for a month. Last week, she returned to her classroom and tearfully sorted through their artwork. Still, she’s worries political pressure will influence Oklahoma’s governor, Republican Kevin Stitt, to open schools prematurely. He allowed some businesses to reopen Friday.

Cole has rheumatoid arthritis, an autoimmune disorder, and her husband is undergoing treatment for leukemia. “The thought of going back too early absolutely terrifies me,” she said.

Some schools simply might not be equipped to keep kids safe. Hand washing is part of any plan for reducing spread of infection, but older schools don’t have many sinks, said Mary Filardo, the founder and director of the 21st Century School Fund, a nonprofit that analyzes facilities and other urban education issues.

“Imagine a school of 500 with maybe 10 sinks total for students,” she said. Modern schools, she said, have far more bathrooms, but older buildings may have just one per gender, per floor. Some school bathrooms lack such basics as soap.

In more affluent schools, she added, children may have their own crayons and calculators, but in low-income areas, they share, spreading germs.

Opening too early could leave schools facing illnesses or lawsuits, or both, said Daniel Domench, executive director of AASA, the School Superintendents Association. He’s skeptical, even as his members work to find creative solutions.

“You would have to tie kids down to their seats to keep them six feet apart,” he said. Still, he said, schools are forced to prepare. When “the governor says schools are going to open, what choice does a superintendent have?” 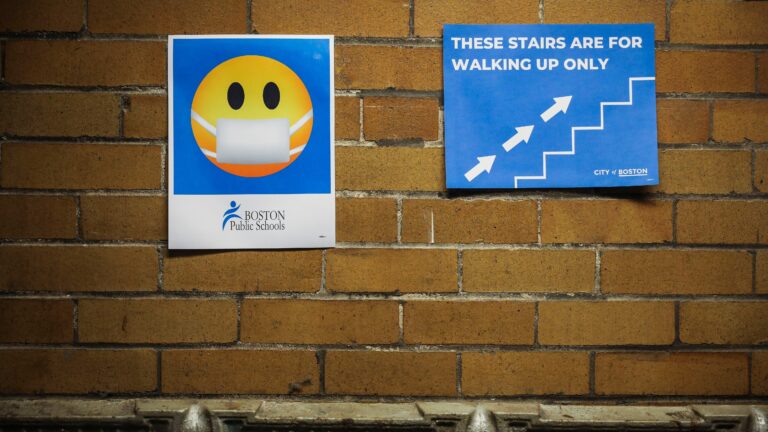