For generations of ambitious students, taking the SAT or ACT was considered essential to apply to the most selective colleges and universities. All but a few ultracompetitive schools required test scores.

For the high school Class of 2021, though, testing mandates are rapidly vanishing as the coronavirus crisis has obliterated exam schedules. This shift, coupled with growing skepticism of the tests that predated the pandemic, could produce lasting change in college admissions as a gigantic test-optional experiment gets underway.

It is now possible for rising high school seniors to apply without a score to more than half of the Ivy League, to most top-ranked liberal arts colleges, to all public universities in California and nearly all in Virginia.

Chloe Pressley, 17, a rising senior in Prince William County, Va., was unable to take the SAT this spring because of the pandemic. She still hopes to take it in the fall, but if she can’t, she has a fallback. Several schools she’s considering, including the University of California at Berkeley, the University of Pennsylvania, and the College of William & Mary, have suspended their test requirements.

“It definitely does make me feel reassured,” Pressley said.

On Monday night, Harvard University announced that it will not require test scores from applicants for fall 2021. That echoed earlier one-year test-optional declarations from Cornell, Columbia, Yale and Brown universities, the University of Pennsylvania and Dartmouth College.

“We understand that the COVID-19 pandemic has created insurmountable challenges in scheduling tests for all students, particularly those from modest economic backgrounds, and we believe this temporary change addresses these challenges,” Harvard said in a statement.

As of Monday night, Princeton University appeared to be the lone Ivy holdout. Stanford University’s dean of admissions and financial aid, Richard Shaw, said his school will consider an application without scores if the pandemic prevents a student from taking the SAT or ACT.

Suspending the mandate for one year raises the question of whether the test-optional pause could become a longer-term policy. One Ivy enrollment chief signaled he has an open mind.

“I’m not a stubborn person,” Lee Coffin, Dartmouth’s dean of admissions and financial aid, said in an interview. “If we go through this cycle and something illuminates itself, we’ll consider what we learned.” Coffin said it is crucial to let potential applicants know that they really do have a choice about whether to submit a score.

“‘Optional’ is not a trick word,” Coffin wrote on his blog. “It is not a wink that signals a continued institutional preference for the upcoming admissions cycle.” Every applicant would be considered fully, he pledged, “without second-guessing the omission or presence of a testing element.”

But the allure of a strong score on the SAT (maximum 1600) or ACT (maximum 36) remains a powerful force in how students perceive their chances of admission to competitive schools. Scores shape where they apply. And many submit scores even when they are optional.

In recent years, the tests have fueled an intense debate among admissions leaders. Many say scores provide valuable insight when weighed alongside grades and other information as they sift through tens of thousands of applications a year. Others say that tests aren’t worth the trouble and that they needlessly deter many worthy applicants. For these skeptics, high school transcripts, application essays and recommendations tell them most of what they need to know.

This year, the debate has tilted dramatically toward the skeptics. The coronavirus crisis was a catalyst, but it was hardly the only factor.

The College Board, which owns the SAT, acknowledged that the virus has wreaked havoc on testing schedules. The organization hopes to expand testing in the fall, but it has delayed plans to offer an at-home version of the SAT and has encouraged schools to relax testing rules. “We therefore are asking our member colleges to be flexible toward students who can’t submit scores, who submit them later, or who did not have a chance to test more than once,” David Coleman, the College Board’s chief executive, said on June 2.

The ACT organization also faces challenges. A national session of the ACT offered Saturday was beset by widespread cancellation of testing sites because of public health concerns. “Thank you for your patience as we continue to navigate the COVID-19 pandemic,” the organization said on its website.

But even before these disruptions, skepticism of the tests was mounting. Critics said the ACT and SAT are too closely aligned with family income – with scores skewing higher for the rich – and exacerbate opportunity gaps for students from African American and Latino families.

Those disparities have helped drive the influential University of California system — with highly coveted campuses in Berkeley, Los Angeles and seven other locations — to move forcefully away from the two exams. Last month, the UC governing board voted unanimously to make the SAT and ACT optional for all applicants for two years and then to eliminate the tests for in-state applicants after that. That represents a momentous leap to a policy known as “test blind,” in which schools don’t consider scores at all. UC officials are also exploring the creation of a new test that they say would provide a better measure of achievement in California’s core high school subjects.

UC President Janet Napolitano said she was bothered by the culture of expensive test preparation programs, dividing applicants into haves and have-nots. “That seemed to me problematic,” she said in a telephone interview after the vote. “We’re a public institution.”

For decades, UC admissions were aligned with the SAT. In 2005, an essay-writing section debuted on the test in large part because UC’s leadership wanted one. Napolitano said she has a good relationship with the College Board, but she decided not to answer an email from Coleman as she was deliberating on a new policy. “I went radio silent on him,” she said.

The College Board declined to comment on communication with Napolitano. But in a statement, it said: “College Board’s mission isn’t to ensure all colleges require the SAT, it’s to expand access to college for more students and help them succeed when they get there. Whether required for admission or not, SAT scores help colleges create data-driven programs to ensure admitted students get the supports they need to graduate.”

The test-optional movement dates to 1969, when Bowdoin College in Maine ended testing requirements. In recent years, it has gained momentum. George Washington University ended its testing mandate in 2015, followed by James Madison University in 2017, the University of Chicago in 2018, Marquette University in 2019 and numerous others.

This year, a twist has emerged as prominent schools have announced test-optional experiments for multiple years.

Among them are Tufts and Fordham universities; the University of Connecticut; and Middlebury, Haverford, Davidson and Oberlin colleges, according to a list kept by the National Center for Fair & Open Testing, which supports the test-optional movement.

Others have ditched testing requirements permanently, including Indiana University in Bloomington and all of Oregon’s public universities.

This month, the University of Virginia said it would suspend its ACT/SAT mandate for a one-year “pilot” and then evaluate the results in 2021. The halt “will give us an extraordinary opportunity to explore the utility of tests in our overall admissions process going forward,” U-Va. President James Ryan said in a statement.

That means testing policy is in play for one of the most competitive public universities in the country.

“It’s a whole new world,” said Jennifer Jessie, a test-prep tutor in Woodbridge, Va. She said test-optional policies are empowering for students who fear how they will be judged based on test scores. “It gives students the opportunity to say, ‘I want to shape my application to highlight my strength.'” 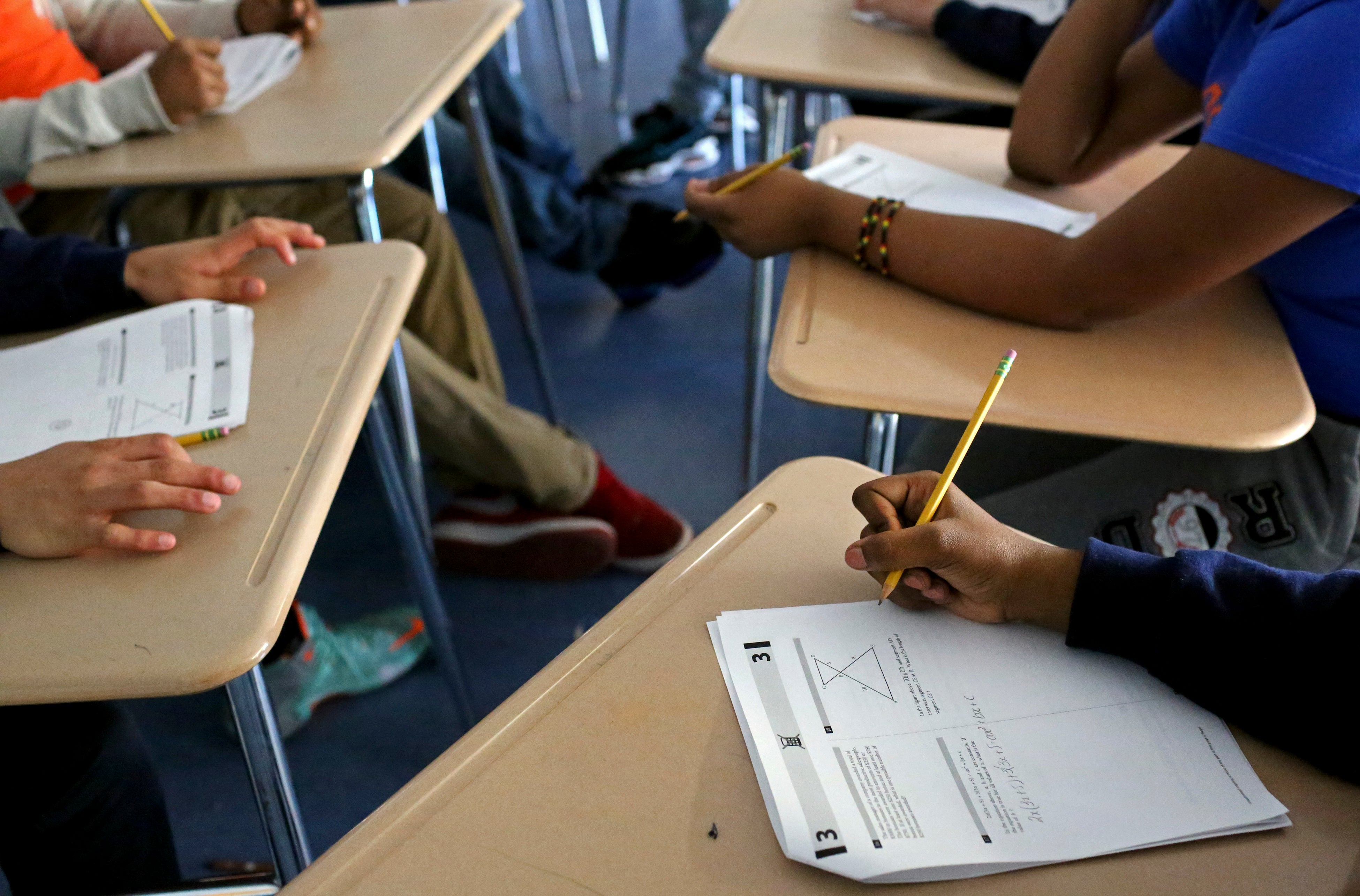