Hundreds of Harvard students will have to log on to classes from their childhood homes across the U.S. this fall. Others fear they’ll soon be sent back to countries where the internet is policed or war is being waged.

That strange split screen is the result of a visa rule announced by the Trump administration last week requiring international students in the U.S. to take at least one class in person — or return to their homelands — even as colleges scramble to set up virtual instruction amid a resurgence of the pandemic.

Harvard University, which is conducting almost all its classes online in the fall semester, and the Massachusetts Institute of Technology, which has a hybrid model, sued the government over the restrictions last Wednesday and will face off against it in a virtual hearing in federal court on Tuesday afternoon.

Missing from the formal legal wrangling, but at the center of the dispute, are the students themselves. Now their voices have emerged in anonymous declarations that Harvard and MIT filed with the court.

In one, a second-year Harvard medical student from Ethiopia, working at the Koch Institute for Integrative Cancer Research at MIT, said going home would mean having to defer their education.

“Ethiopia is currently experiencing significant civil unrest, and I am concerned for my safety if I were to return at this time,” the student wrote, adding that the government recently shut down the internet in response to the conflict.

Even those who can connect to Wi-Fi will have to hop on Zoom at all hours of the morning — 12:30 a.m. for a student from Kashmir taking a course that classmates would take at 3 p.m. in Massachusetts.

A Harvard student from Australia said she would be separated from her child if she were forced to go home. The baby was born in March and doesn’t have a passport yet.

“Given the ongoing uncertainty around passport processing times, I do not know how long we would be separated,” the student wrote. She said it’s “something I cannot imagine.”

A graduate student due to return to MIT from South Africa told the court the outcome of the lawsuit could mean life or death.

“Just this past week, seven armed men invaded my home and robbed my family and I at gunpoint,” the student said, explaining that home invasions “are unfortunately not uncommon” there.

U.S. District Judge Allison Burroughs in Boston, who ruled for Harvard last year in a case alleging it discriminates against Asian-Americans in admissions, is considering a request by the two schools to put a freeze on the new policy.

Before the pandemic, international students on F-1 visas were required to take most of their classes in person, allowed only a single online course per semester. After the virus appeared and some universities stopped offering in-person classes, U.S. Immigration and Customs Enforcement adjusted its rules “for the remainder of the emergency,” allowing fully online coursework.

Last week’s new order ratcheted that back. Students at colleges that have announced online models, including Harvard and the California State University system, must transfer or go back to their home countries.

ICE says it weighed the impact on students in revising its policy, choosing not to simply go back to its pre-pandemic strictures, for example. It contends that a full slate of virtual coursework compromises national security by giving foreign students free rein within the U.S., and says a freeze would undermine “the deference afforded administrative agencies in complex and interrelated fields like immigration enforcement.”

ICE says Harvard and MIT don’t have “third-party standing” to file complaints on behalf of the students, but “merely allege a variety of potential burdens” some “may or may not experience” if required to leave the U.S. Burroughs has given the schools until noon on Tuesday to file a response to that claim and others by the U.S.

In addition to the student declarations, 13 consolidated “friend of the court” briefs have been filed in support of the lawsuit, representing over 100 universities and some of the biggest tech companies in the U.S. A handful of separate suits have been filed against the policy, including one by Massachusetts representing 17 states and the District of Columbia. 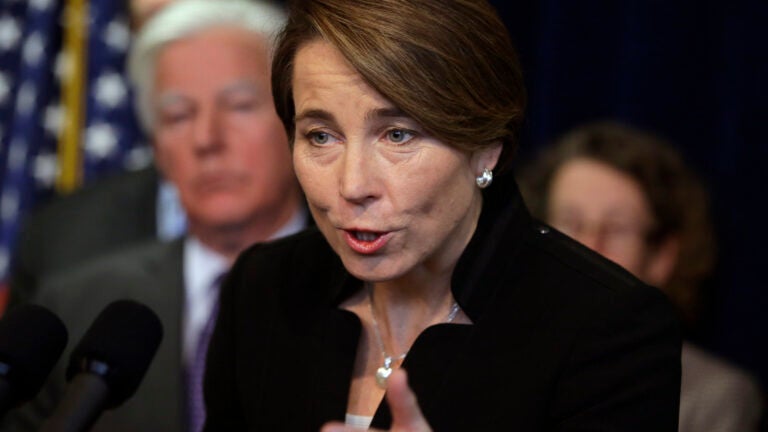