Massachusetts schools in so-called “red zone” or high-risk coronavirus communities are encouraged to keep in-person learning models running until there is evidence of virus transmission within school buildings, the state Department of Elementary and Secondary Education commissioner said Tuesday.

“The COVID Command Center recently noted that districts and schools currently open for in-person instruction are encouraged to remain open even if their local community is designated as red, so long as there is no evidence of COVID-19 transmission in schools,” Jeffrey Riley, commissioner of DESE, told lawmakers. “This is a key distinction. I want to say as we look across the world, we are seeing, in Europe for instance, we’re seeing second spikes that are happening, but schools are remaining open because like here in America and certainly here in Massachusetts, we are not seeing the spread take place, the clustering take place in schools as was initially feared.”

Riley’s remarks urging educators to keep students in physical classrooms arrived as the number of cities and towns considered in the red by the state Department of Public Health has only risen in recent weeks, including in Boston, where officials opted to shut down all in-person instruction as a result of the increased virus activity.

Red communities are areas where there are at least eight daily coronavirus cases on average per 100,000 people. As of the latest data released Thursday, 77 cities and towns across the commonwealth are now at the highest risk of virus transmission — 14 more than the previous week.

According to weekly data released by DESE, students attending classes in person and district staff members reported 129 and 73 positive virus cases, respectively, between Oct. 15 and 21. There have been 622 total cases recorded in schools since the beginning of this school year.

In August, DESE advised school districts in red communities to shift to remote learning practices, and then later said areas that were in the red zone for three consecutive weeks should take classes online.

Currently, there are approximately 1,400 school buildings — out of a total of 1,845 — in the commonwealth that are open in some capacity for in-person instruction, Riley told the Joint Committee on Education. Between 425,000 and 450,000 students are attending classes in person, he said.

Eighty percent of school districts in the state are using either a full in-person or hybrid model, though most are using the latter, Riley said.

As a whole, Massachusetts schools “have seen relatively low (numbers) of positive cases compared to their communities at large,” he said.

“Due to district success so far in keeping positive cases low, we are strongly recommending that districts use several weeks of community health metric data before shifting their model,” Riley said. “We’re also asking districts to consider keeping their models open until there is any evidence that there is transmission happening in a school.”

Teachers unions across the state pushed back on the directives.

“Pushing schools in high positivity zones to remain open without consideration for the safety of our highest-needs students and without resources from the state to be able to do that doesn’t help to keep anyone safely in schools,” the Boston Teachers Union told The Boston Herald in a statement.

American Federation of Teachers Massachusetts President Beth Kontos told the newspaper the guidance from Riley sounded like schools must wait until “more people get sick” before closing classrooms.

She questioned why the color-coded DPH designations are necessary at this point.

“The goalpost keeps changing, keeps moving and that’s what we don’t appreciate,” Kontos said. “It gets to the point where this is just meaningless.” 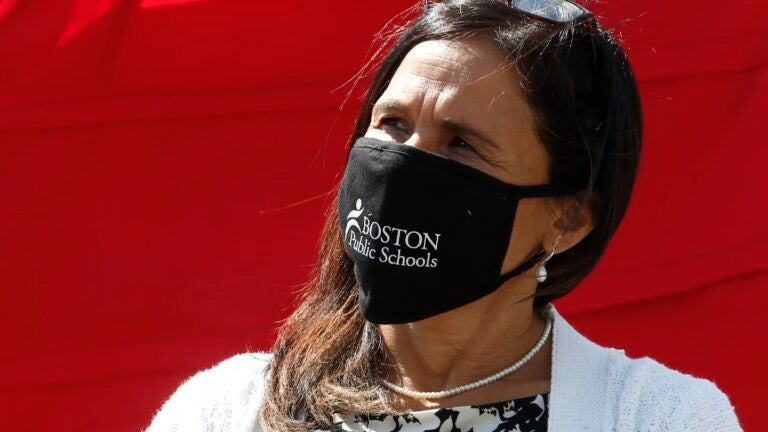