Roughly a quarter of public school districts in Massachusetts are in fully remote learning models due to the COVID-19 pandemic.

However, a new poll released Thursday indicates that those districts cut disproportionately across racial and socioeconomic lines.

“There are big, big, big differences there,” said Steve Koczela, the president of MassINC Polling.

According to the MassINC survey of 1,549 parents of K-12 students across the state, Black, Latino, and lower-income families are far more likely to report having a kid in fully remote learning. The poll found that 80 percent of Latino parents making less than $75,000 a year said they had a kid in fully remote school. The same was true for 73 percent of Black parents making less than $75,000.

Overall, equal numbers have kids in hybrid and remote school, with far fewer in person. But there are major disparities by income, education and race. pic.twitter.com/KW4HKioqP5

The survey results appear to correspond with Department of Public Health data, which generally shows the highest COVID-19 rates in the state’s gateway cities and communities of color, where a disproportionate share of residents are frontline workers or live in multi-generational families.

The poll also found that parents with higher incomes, college degrees, and children in private schools were more likely to have a student in a hybrid learning model, where they spend some days in a physical classroom and others learning from home.

At the same time, the poll found that higher-income and white parents were more pessimistic about the negative impacts of this year of schooling on the children’s academic experience, mental health, and social life. It also found that parents reacted more negatively to hybrid learning models than they did to fully remote models, which Koczela suggested may be due to the relative lack of schedule regularity and active teaching.

And while Koczela repeatedly cautioned that the poll measured parents’ “perceptions” as opposed to objective assessment, the poll also found increasing concern across all race and income categories that students were falling behind their grade level.

The poll comes as Massachusetts Gov. Charlie Baker’s administration continues to urge more districts to resume in-person learning. Despite the increase in COVID-19 cases this fall, state officials say that schools do not appear to be a significant course of transmission. They also express concern about the negative emotional, development, and equity effects of sustained remote learning.

Vernee Wilkinson, the director of family engagement at SchoolFacts Boston, said in a statement Thursday that the disparities illustrated by the MassINC poll show there is “a real risk that already vast educational disparities in our state will get that much larger.”

“We must not only do everything possible to support students and families in this moment, but to plan now for how we’ll mitigate impacts of this pandemic when schools reopen,” Wilkinson said. 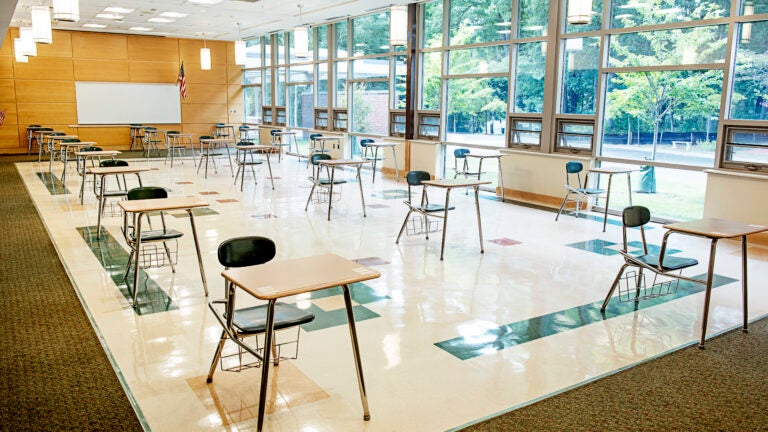