LONDON (AP) — The U.K. marked the 75th anniversary of the defeat of Japan in World War II on Saturday, with Queen Elizabeth II and her husband Prince Philip leading tributes to those who fought during the six-year campaign.

In a special message on Victory over Japan Day, the queen and Philip offered their “grateful thanks” to those involved in a campaign that has been widely overlooked in the decades since.

The war cost the lives of some 50,000 British and Commonwealth troops, nearly half of whom perished in brutal prison camps.

“Those of us who remember the conclusion of the Far East campaign, whether on active service overseas, or waiting for news at home, will never forget the jubilant scenes and overwhelming sense of relief,” said the 94-year-old queen, who remains in quarantine at her residence in Windsor Castle because of the coronavirus pandemic.

“Amongst the joy at the end of the conflict, we also remembered, as we do today, the terrible devastation that it brought, and the cost borne by so many,” she added.

Following the surrender of the Nazis on May 8, 1945, which is called Victory in Europe Day, Allied troops carried on fighting the Japanese until an armistice was declared on Aug. 15, 1945 after the U.S. dropped two atomic bombs on the Japanese cities of Hiroshima and Nagasaki.

Japan formally surrendered on Sept. 2, 1945, but many Pacific War veterans felt their efforts were not fully recognized in the fog of the mushroom clouds. They dubbed themselves the “forgotten army.”

They were being remembered Saturday across the U.K., first with a commemoration at the National Memorial Arboretum in central England that included a two-minute silence and a flypast by Battle of Britain planes.

The ceremony was attended by Prime Minister Boris Johnson, Prince Charles and his wife, the Duchess of Cornwall. They all spoke with some of the 40 veterans present, carefully observing social distancing guidelines.

One of the veterans, 97-year-old Edward Woodward, prompted some amusement when he told the prince and the duchess that the most sought-after item among the air-dropped rations was “toilet paper.”

Another, Richard Day, 93, remembered the harsh conditions facing everyone, including how he contracted malaria and dysentery at the same time while fighting a highly determined enemy.

“I think the worse part was crossing rivers at night. It was cold at night, then all night in wet clothes and wet equipment, still having to move about,” he said. “It was a glory for them (the Japanese troops) to die for their emperor. They didn’t appear to have any fear at all.”

In an open V-J Day anniversary letter addressed to “Veterans of the Far East Campaign,” Johnson hailed the courage of those who fought in Asia and the Pacific.

“You were the last to come home but your achievements are written in the lights of the glittering capitals of the dynamic region we see today,” he said.

Johnson acknowledged their wartime experiences had been “overshadowed in popular imagination by the conflict in Europe,” but he stressed that their service had brought World War II to an end and inaugurated a period of peace and prosperity across southeast Asia that remains to this day.

Britain, which had been a colonial power across much of the region, suffered arguably its biggest military defeat to Japanese forces in the early years of the war. Overwhelmed troops had to retreat from Malaysia, Singapore and Burma in some of the most inhospitable conditions imaginable.

“These blows were so heavy that many feared they would break your will to fight on,” Johnson said in his tribute letter. “But you survived the longest retreat in British history, marching almost 1,000 miles from Burma to India, and then you regrouped and reformed.”

The prime minister also highlighted the creation of the “formidable” 14th Army, a fighting force that was made up of nearly a million soldiers, including ones from India and Africa, and which helped “turn defeat into victory.”

Heavy clouds on Saturday meant that the Royal Air Force’s aerobatics display team, the Red Arrows, could not do their designated flypasts of the U.K.’s four nation capitals for the first time since the 2012 Olympic Games in London.

The poor weather meant they couldn’t fly over London, or the Scottish and Welsh capitals, Edinburgh and Cardiff. Only residents in the Northern Irish capital of Belfast were able to see the aerial display. 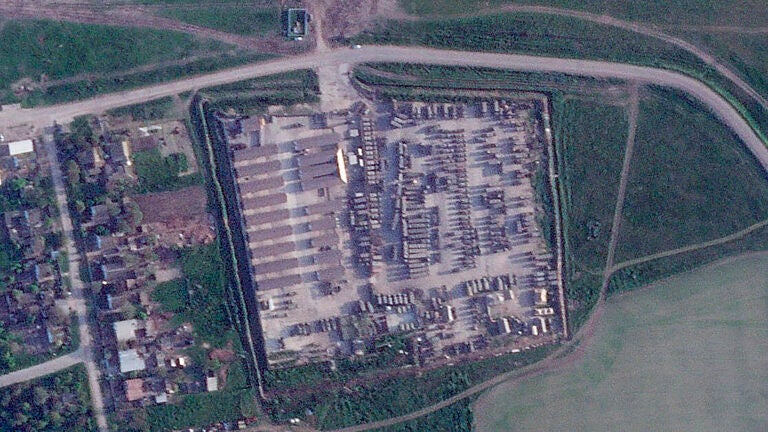