ALBUQUERQUE, N.M. — Alec Baldwin was rehearsing a scene that involved pointing a revolver “towards the camera lens” when the gun — which the crew had been told did not contain live rounds — suddenly went off and killed the cinematographer, according to the film’s director, who was quoted in an affidavit released Sunday night.

The film’s director, Joel Souza, described hearing what “sounded like a whip and then loud pop.”

The account by Souza explained why Baldwin had been pointing the gun at the cinematographer, Halyna Hutchins. But it did not answer the question of how a gun that was not supposed to contain live ammunition wound up killing her.

The director, who was wounded in the shooting, told investigators that he had believed that the gun was safe and that it had been described as a “cold gun” in firearm safety announcements. He said that guns on the film’s set were typically checked by the film’s armorer, Hannah Gutierrez-Reed, and then checked again by Dave Halls, the assistant director, who would hand them to the actors.

On Thursday, after preparing for the scene in a set of a church, Souza said, there was a lunch break, and the crew was taken by shuttle elsewhere for food. He said that they returned to the set after lunch but that he was “not sure if the firearm was checked again.”

The new details, which emerged when the Santa Fe County Sheriff’s Office released the affidavit used to obtain a search warrant, provided the fullest account yet of the deadly shooting, which took place Thursday afternoon on a set outside Santa Fe.

Baldwin had been sitting in a wooden church pew, rehearsing a scene that involved “cross drawing” a revolver and pointing it at the camera lens, Souza said, according to the affidavit. Souza said that he had been standing beside Hutchins “viewing the camera angle.”

Souza saw Hutchins grabbing her midsection and starting to stumble backward. Then he noticed he was bleeding from his shoulder.

The details, woven together by Detective Joel Cano in an application for a search warrant to seize everything from camera memory cards to bone fragments and firearm discharge, provide a chilling account of that fatal shooting on a production set that had been beset by accidental gun discharges and labor disputes between producers and crew members. (The warrant was granted.)

“Upon making contact I did observe a visible injury to his right shoulder,” Cano said in the affidavit, describing how he had interviewed Souza on Friday afternoon, after the director had been treated for his injury. Hutchins, who sustained a gunshot wound to the chest area, had already been pronounced dead Thursday at University of New Mexico Hospital in Albuquerque.

“Joel stated there should never be live rounds whatsoever, near or around the scene,” Cano wrote in the affidavit.

Souza was grappling with delays the day of the shooting, after about six members of the camera crew had quit over late pay and safety conditions, the affidavit said. Another crew had quickly been hired, but the production was off to a late start because of the labor problems. Souza said only one camera was available for recording before the shooting.

Asked about “the employees’ behavior,” Souza told investigators that “everyone was getting along” and that there had been “no altercations” to his knowledge.

The affidavit also includes notes from an interview with Reid Russell, a cameraman who was standing near Hutchins and Souza when the gun discharged.

Russell told the detective that after returning to the set from lunch, he had stepped outside for about five minutes; when he returned, according to the affidavit, Baldwin, Hutchins and Souza were setting up the scene and were already “in possession of the firearm.” Russell said he was not sure if the firearm had been inspected because he had been absent for those five minutes.

According to the affidavit, Halls grabbed the revolver from a gray, two-tiered tray set up by Gutierrez-Reed. Halls handed the gun to Baldwin and shouted, “cold gun,” which on a film set typically refers to an unloaded firearm.

While setting up the scene, the crew had to reposition the camera because there was a shadow. Russell told the detective that Baldwin was explaining how he was going to draw the gun, pulling it out from the holster, when the firearm discharged.

Russell said that Baldwin had been “very careful” with the firearm; during an earlier scene, Russell said, Baldwin had tried to ensure safety on set, making sure that a child wasn’t near him when he was discharging the gun. Asked about how members of the production team were behaving as they set up the scene, he said “everyone seemed to be getting along.”

Souza, the director, told the detective that because the crew had been setting up the scene when the gun discharged, the incident had not been filmed.

After the firearm was discharged, Russell told the detective he “remembered Joel having blood on his person, and Hutchins speaking and saying she couldn’t feel her legs.” 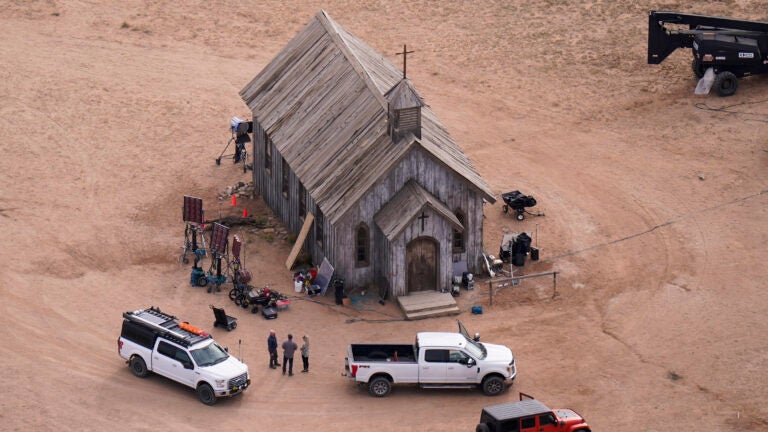 Lawsuit: Alec Baldwin had no reason to fire in 'Rust' shooting