It’s been a tumultuous few days for baby owls in Methuen and Watertown after close calls involving rodenticide and a daring tree rescue.

A wildlife rehabilitator told local outlets that three baby owls from Methuen were on the mend after ingesting rodenticide meant to kill mice and rats.

Linda Amato told News Center 5 that the owlets likely ate rodents that had died after ingesting the poison. The triplet owls’ mother died from the ordeal, Amato said, after feeding her babies the tainted prey. Rescuers took note after one of her babies fell from its nest.

The owls were recovering with the help of rehabilitation experts from Cape Ann Wildlife Inc. The owlet that fell from the tree has been getting vitamin K injections to stop its bleeding.

The Methuen rescue coincided with another baby owl debacle — this one in Watertown. According to WBZ, wildlife rehabilitators from the Animal Rescue League of Boston Field Services Department rescued a baby Great Horned Owl that was trapped in a tree at the Oakley Country Club.

WBZ reported that a Watertown resident saw the 6-week-old owlet atop a tree earlier this week. When it didn’t move for a few days, they called the ARL.

The fledgling was stuck about 30-feet high when rescuers arrived — too young to fly. Rescuers tried to capture the owlet in a net, but the young bird kept evading its attempts. Eventually, rescuers were able to get the owl down by pulling down the branch it was standing on.

Experts said the owlet was likely abandoned by its parents and unable to properly fend for itself.

The Watertown owl is doing well at Tufts Wildlife Clinic in North Grafton. Rehabilitators will treat it and then release it back into the wild. 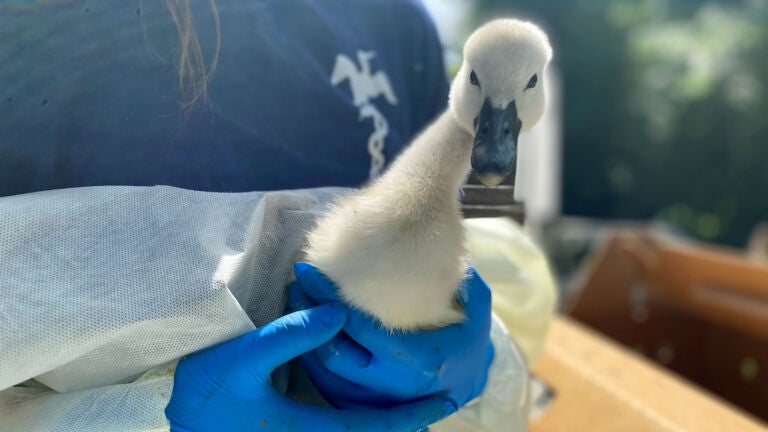