As climate change worsens and the risk of flooding becomes more apparent in Boston, researchers are hard at work on an innovative project that could protect the city.

Dubbed the Emerald Tutu — a riff on Frederick Law Olmsted’s iconic chain of green spaces known as the Emerald Necklace — the project is being developed by a team at Northeastern University. The idea is to place a network of environmentally-friendly circular mats of vegetation in the waters around Boston.

The mats would be arranged in rings, designed to protect the coastline from rising sea levels and storm surges, according to the university. In addition, offshore walkways would weave through the mats, adding more recreational green space to the area.

Biodegradable material like coconut fiber, wood chip byproduct, burlap canvas and marine-grade rope would be used to construct the mats. That way, they wouldn’t harm the environment if they were to be dislodged from the network.

The mats would be about seven feet in diameter, creating lots of space for grasses to grow on top and seaweed to grow below, according to the university.

Coastal wetlands like marshes are known to protect communities near the shore, soaking up and dispersing energy from waves. The Emerald Tutu would emulate this natural phenomenon in an urban environment.

Another benefit of the Emerald Tutu’s modular design is that the individual mats could be easily reconfigured to accommodate water traffic, Hopkins told MIT. In general, nature-based approaches to projects like this offer more adaptability than man-made seawalls and levees.

The project was developed by Julia Hopkins, Gabriel Cira, Nick Lutsko, Edoardo Borgomeo, and Louiza Wise. It is still in its early stages, but some mats have already been tested and the idea has won prizes from MIT and the American Society of Civil Engineers. It also received a Small Business Innovation research grant from the National Science Foundation in 2020.

Hopkins has already tested a few sample mats in a wave energy basin at Oregon State University, and deployed the first local mat off an East Boston pier last spring, according to Northeastern. East Boston is more susceptible to flooding than other areas of the city.

In late summer, Hopkins and other researchers pulled the mat out of the water and were shocked at how much vegetation had taken to the new surface. Both marsh grass and seaweed took to the mat easily. As more plant life grows, so too does the mat’s ability to absorb energy and protect the coastline.

This summer, another mat is being tested out in the waters near Salem, and another will soon be launched in Boston Harbor with the help of Stone Living Lab. The Emerald Tutu team is already at work planning a large pilot project next summer.

According to a report released earlier this year by the National Oceanic and Atmospheric Administration, sea levels along the U.S. coast will be about a foot higher in 2050 than they were in 2000. New England, particularly Boston, could be especially at risk. Researchers estimate that the Northeast could have a sea level about 16 inches higher in 2050 than in 2000, The Boston Globe reported. Over the last 100 years, sea levels have risen by less than a foot in the region.

A warming planet means warming oceans, which causes seawater to expand and sea levels to rise. Simultaneously, melting ice also contributed to sea levels getting higher, according to the National Oceanic and Atmospheric Administration. A multitude of factors determine how sea levels change, and this is not happening at the same rate around the world.

Massachusetts is blessed with lots of natural barriers like coastal marshes that protect communities from flooding. But those barriers themselves could be in danger from climate change, emphasizing the need for new projects like the Emerald Tutu. 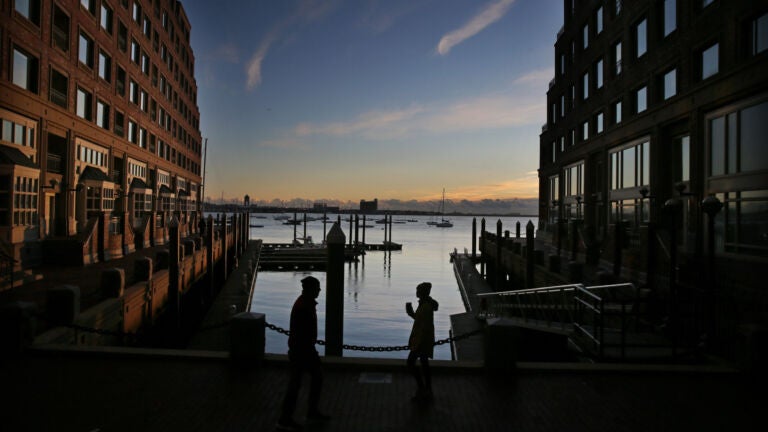