Massachusetts has long been known as one of the world’s best whale watching locations. But recently, people enjoying the local waters have gotten an extremely close – and dangerous – look at these majestic creatures.

On Sunday, a young humpback whale breached and landed on the bow of a small boat near White Horse Beach in Plymouth. The dramatic incident was caught on camera. There were no injuries, and the 19-foot boat sustained moderate damage but nothing that affected its seaworthiness, according to a post from the Town of Plymouth.

Just a few days earlier, a paddleboarder captured video of a whale bumping a small boat off the coast of Plymouth, sending it rocking back and forth but not causing any serious damage. On the morning of July 19, another paddleboarder came within 25 feet of a breaching whale.

So, why the sudden flurry of whale activity in this area? The answer, unsurprisingly, also lies beneath the surface. These humpbacks have been drawn to the waters off Manomet Point by some wonderful feeding opportunities.

In particular, three juvenile humpbacks have been engaged in “physically active feeding behavior that is very unpredictable,” according to a release from the Massachusetts Division of Marine Fisheries. They are feasting on Atlantic menhaden, also known as “pogies.” These forage fish tend to gather in large schools, creating an easy opportunity for predators to grab a meal. Humpback whales and striped bass are two of these predators.

In turn, the whales and bass draw humans, either anglers hoping for a catch or others hoping for an up-close glimpse of a whale. These factors have led officials to urge extreme caution, as the conditions present a safety hazard for humans and whales.

These humpbacks could be even more unpredictable than normal, due to their young age, the shallow water, and the encroachment of boats and paddleboards, officials said.

It is illegal to harass marine mammals, which includes any act of pursuit, torment, or annoyance that could injure or disrupt the feeding behavior of these creatures. Officials recommend that people out on the water stay at least 100 feet away from whales.

While feeding the whales are distracted, focusing more on fish than the boats surrounding them. The humpbacks near Plymouth appear to be engaging in lunge feeding, a tactic where whales open their mouths wide and gain speed quickly, either vertically or horizontally, to consume a large amount of prey at once.

This can lead to close calls like the incident on Sunday. Researchers from The Center for Coastal Studies and Whale and Dolphin Conservation are investigating the collision, and working to identify the individual whales feeding in the area.

Humpbacks usually grow to between 30 and 60 feet, according to MassWildlife. They can weigh between 23 and 30 tons. These baleen whales are easily identifiable by their white flippers, knob-like protuberances, and pear-shaped double blow-holes. Humpbacks can be found around the world, but the ones that come to Massachusetts are part of a population native to the North Atlantic. They migrate annually between feeding and breeding grounds depending on the season. During the winter, humpbacks head to warmer waters to mate and give birth, but most of their feeding occurs between the spring and fall in feeding grounds like the waters near Plymouth.

Humpbacks are popular with whale watchers, since they often come close to the shore and breach the water’s surface, according to the National Oceanic and Atmospheric Administration. They filter-feed on small crustaceans like krill and small fish. 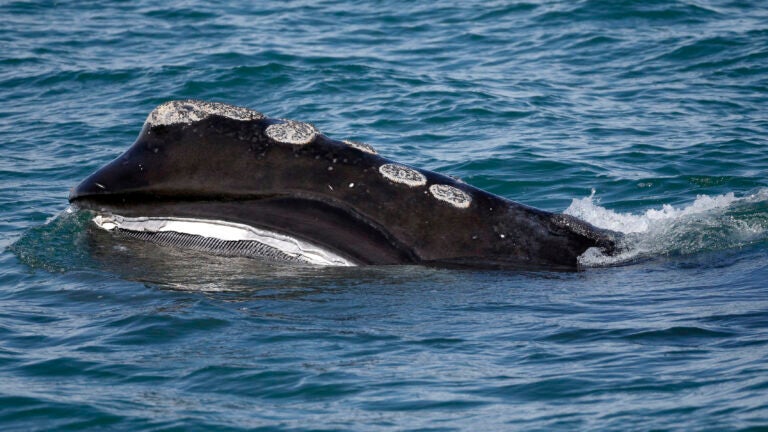