Lobsters, crabs, and other marine creatures living in Cape Cod Bay could be in major danger due to decreasing levels of oxygen detected in those waters.

Recent data collected by the Massachusetts Division of Marine Fisheries (DMF) indicates that the southern half of Cape Cod Bay is experiencing decreasing levels of dissolved oxygen, an important indicator of water quality.

Dissolved oxygen is simply the amount of oxygen that is present in water. All aquatic animals rely on dissolved oxygen to breathe, according to the EPA. When enough oxygen is not present these creatures can experience hypoxia — a dangerous lack of oxygen.

Hypoxic conditions form, according to the DMF, when surface waters heat up, leading to differing levels of water temperature and density between different areas of the ocean. Cooler, more dense water is isolated in lower areas. This prevents oxygen from the surface mixing down to the lower waters. Decaying organic materials on the ocean floor use up dissolved oxygen, and hypoxic conditions are created when surface waters can’t mix with the lower waters. Storms are a common cure for hypoxic conditions, as they help the different levels of water mix.

In 2019, a “severe hypoxia event” killed hundreds of pounds of lobsters, crabs, and finfish in the same area. Scientists began using new monitoring technology, which allowed them to detect a mass of water in Cape Cod Bay containing particularly low oxygen levels. Researchers nicknamed it “The Blob.”

This deadly mass moves around the southern portion of Cape Cod Bay, pushed and pulled by wind and sea conditions. In September 2019, strong winds blowing from the north pushed “The Blob” into deep waters, killing the lobsters and other creatures found there. “The Blob” was broken up by natural conditions soon after, but it could be making a return to the waters off Sandwich and Barnstable.

Many animals will move in order to avoid hypoxic conditions, the DMF said, but can become stuck and die if exposed to the conditions for more than a couple hours. Officials are urging fishermen working in the area to be on the lookout for signs of hypoxia, such as unusual amounts of lethargic or dead lobsters, crabs, or finfish in traps. They should check traps frequently, and consider moving their gear outside the affected area to prevent trapping animals in hypoxic waters.

“No prolonged periods of severely hypoxic conditions have been detected yet this summer, but the trends of declining DO we’ve observed are concerning,” the DMF said in a statement.

Officials did note that dissolved oxygen levels can change rapidly based on weather conditions, and it is difficult to predict the timing and location of hypoxic conditions.

It is normal for Cape Cod Bay to experience a seasonal decline in dissolved oxygen levels, particularly in bottom waters, during the late summer and early fall. This is believed to be caused, in part, by blooms of plankton that increase the amount of decomposing organic material, which in turn uses up more oxygen. Scientists are studying why dissolved oxygen levels dip lower in some years compared to others. 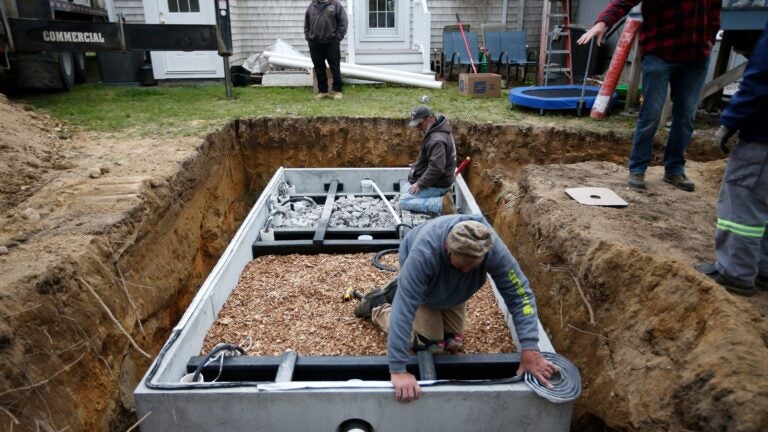