BERLIN (AP) — Climate protesters threw mashed potatoes at a Claude Monet painting in a German museum to protest fossil fuel extraction on Sunday, but caused no damage to the artwork.

Two activists from the group Last Generation, which has called on the German government to take drastic action to protect the climate and stop using fossil fuels, approached Monet’s “Les Meules” at Potsdam’s Barberini Museum and threw a thick substance over the painting and its gold frame.

The group later confirmed via a post on Twitter that the mixture was mashed potatoes. The two activists, both wearing orange high-visibility vests, also glued themselves to the wall below the painting.

“If it takes a painting – with #MashedPotatoes or #TomatoSoup thrown at it – to make society remember that the fossil fuel course is killing us all: Then we’ll give you #MashedPotatoes on a painting!” the group wrote on Twitter, along with a video of the incident.

In total, four people were involved in the incident, according to German news agency dpa.

The Barberini Museum said later Sunday that because the painting was enclosed in glass, the mashed potatoes didn’t cause any damage. The painting, part of Monet’s “Haystacks” series, is expected to be back on display on Wednesday.

“While I understand the activists’ urgent concern in the face of the climate catastrophe, I am shocked by the means with which they are trying to lend weight to their demands,” museum director Ortrud Westheider said in a statement.

Police told dpa they had responded to the incident, but further information about arrests or charges was not immediately available.

The Monet painting is the latest artwork in a museum to be targeted by climate activists to draw attention to global warming.

Just Stop Oil activists also glued themselves to the frame of an early copy of Leonardo da Vinci’s “The Last Supper” at London’s Royal Academy of Arts, and to John Constable’s “The Hay Wain” in the National Gallery. 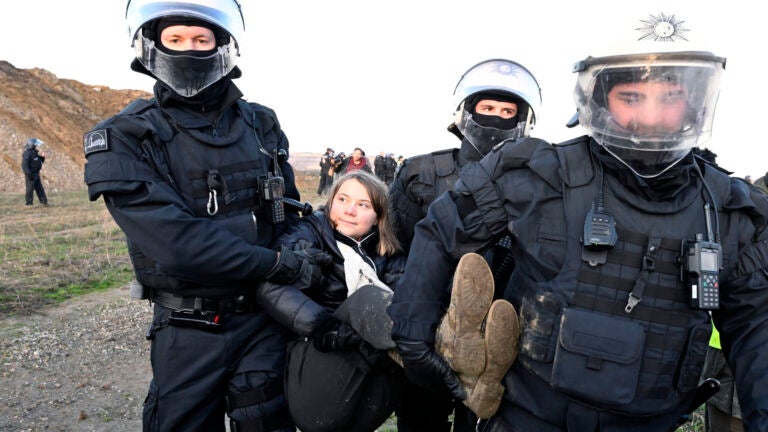 Greta Thunberg carried away by police at German mine protest