Call this a fluff piece if you want, but the marshmallow spread has maintained an enduring, if at times contentious, presence in the state of Massachusetts.

Marshmallow Fluff — supposedly invented 100 years ago in Somerville — continues to churn out of the Durkee-Mower factory in Lynn into Fluffernutters across New England. Even amid increasing concerns over the health effects of added sugar, Esther Hanig says Fluff remains “one of those things you have to treat yourself to periodically.”

“I think that will always be true,” said Hanig, the director of Union Square Main Streets, which is planning a special centennial edition of their annual What the Fluff? festival this Saturday in Somerville.

In 1917, Somerville resident and confectioner Albert Query began going door-to-door selling his own version of the goopy spread.

However, due to a supply shortage in World War I, Query was forced to give up his Fluff business. And in 1920, he sold his recipe for $500 to two local candy entrepreneurs, H. Allen Durkee and Fred L. Mower. 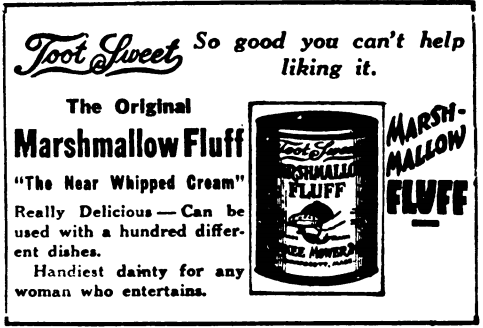 “Rumor has it that he regretted that,” Hanig said.

According to the Durkee-Mower website, their door-to-door sales gained enough word of mouth for Fluff to land a spot on grocery store shelves. Within 10 years, the company was advertising in local Boston newspapers and on the radio.

“Ten years ago we started out with one barrel of sugar (at 28 cents per pound) a few tin cans: two spoons: one second hand Ford, and no customers, but plenty of prospects,” Durkee wrote in 1930. “Today (after a short span of only ten years) we have thru the fine cooperation of the wholesale grocers, the largest distribution of marshmallow creme in New England, and no Ford.”

As a 10-year-old in the 1930s, former First Lady Barbara Bush said she bought a can of Fluff and “happily ate it all the way home” with her hands. Though neighbors found it to be the “cutest thing,” it did not end well for the future FLOTUS.

“Mother did not think it was quite so cute,” she wrote in her 1994 memoir. “To add insult to injury, I was violently ill. I have not eaten it since.”

The loss of Bush’s constituency notwithstanding, Fluff continued to spread.

The Lynn company was able to survive through the national economic downturn of the Great Depression and the sugar rationing of World War II — and even opened a new factory in 1950 to produce it’s then-newly designed jars. The same Lynn plant continues to steadily fill that same basic jar today.

Mimi Graney, the author of Fluff: The Sticky Sweet Story of an American Icon and former founding director of Union Square Main Streets, says for many that unchanged red-and-blue packaging “communicates a deep sense of home and nostalgia.”

“People love Fluff I think because it’s evokes childhood — everyone seems to associate it with their own,” Graney said.

A good part of the childhood nostalgia Fluff evokes can likely be credited to a particular sandwich, which — when given a closer look — is where the story gets more complicated. 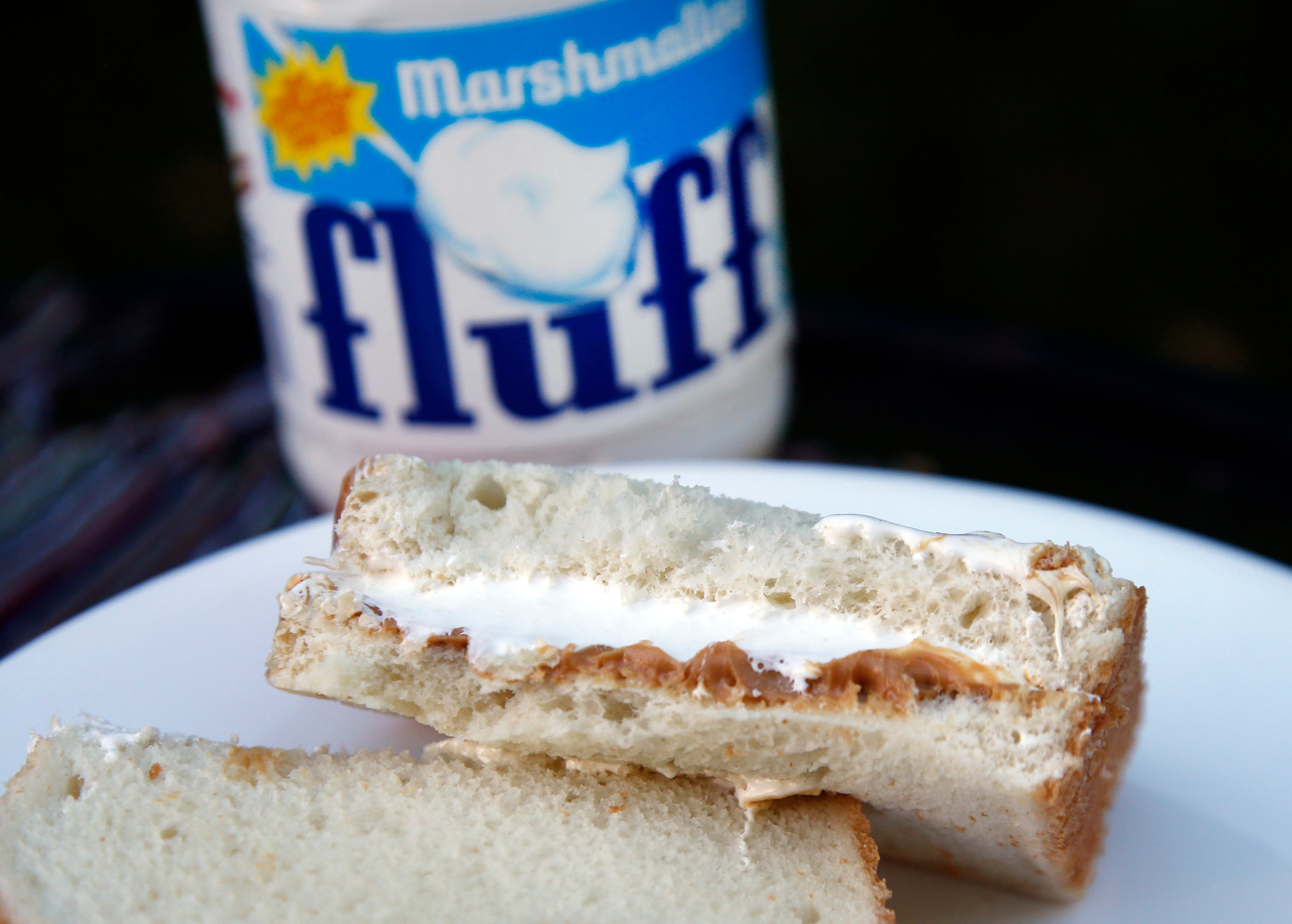 A jar of Marshmallow Fluff and a Fluffernutter sandwich are displayed in North Andover in 2013.

According to the New England Historical Society, the first Fluffernutter recipe was actually published by an earlier marshmallow creme competitor. In fact, as Eater has written, while Query’s Somerville invention eventually won out, earlier versions of marshmallow creme itself predated the Fluff brand by at least 20 years. Durkee-Mower has even acknowledged as much.

“They were all unique products that came out at roughly the same time ours did,” Jon Durkee, the president of Durkee-Mower and grandson of H. Allen Durkee, told Boston magazine in 2014.  “Just through the war of attrition, you could call it, companies go out of the business.”

Brigid Alverson, a local writer and assistant in Melrose mayor’s office, says the creme actually originated in 19th-century Paris, where pharmacists “came up with the idea of whipping [marshmallow juice] with sugar and egg whites to make a light, fluffy throat remedy.”

For that matter, a product specifically named “Marshmallow Fluff” even appears prior to the creation Query sold to Durkee-Mower. Limpert Brothers, a New Jersey company, says it created Marshmallow Fluff in 1910 and trademarked it in 1913.

In 1939, as the company details in length on its website, Limpert Brothers became aware that “another company” was using the Marshmallow Fluff name.

“They were in New Jersey, and we were in New England, and you couldn’t do an internet search and find out about trade names back then,” Jon Durkee told Alverson in a 2007 article for North Shore Sunday.

“They had prior use of the name, although it’s a slightly different product,” he said. “Theirs was more for ice cream topping. It’s thicker, more fluid.”

After negotiations, the two sides came to an agreement in which Durkee-Mower would purchase “a segment” of the Limpert Brothers’ trademark, so that the Lynn company could sell Fluff to retail grocery customers and only in containers up to one pound, except in New England. Meanwhile, Limpert Brothers would continue to sell their product to restaurants and ice cream shops.

“We know of no other case in American business where the same trademark or brand is used simultaneously by two unrelated, private or public companies, who use the same brand, on the same product, at the same time,” the New Jersey company says.

Meanwhile, the iconic peanut butter and marshmallow creme sandwich appears to have roots closer to Fluff’s alleged home — though not in Somerville or Lynn. 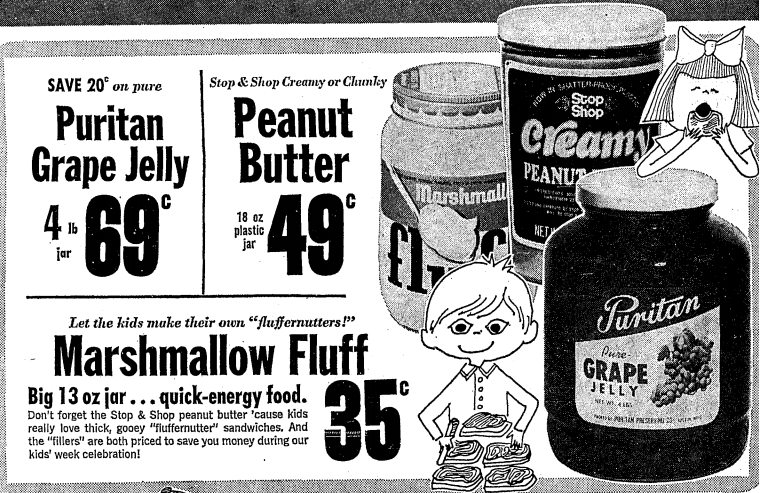 A July 1969 Fluff ad in The Boston Globe mentioning the “fluffernutter” sandwich.

The sandwich’s first recipe appeared in a 1918 booklet from a early Fluff competitor, Snowflake Marshmallow Creme, a Melrose-based company led by the brother-sister duo, Amory and Emma Curtis. Being in the midst of World War I, they called it “The Liberty Sandwich.”

Alverson says she thinks Melrose should get credit for the peanut butter and marshmallow sandwich, but understands why they don’t.

“History is written by the survivors, and the Curtis marshmallow company went out of business in 1947,” she said.

While several other companies also marketed the peanut butter and marshmallow sandwich, Durkee-Mower were the ones to coin “Fluffernutter” and capitalize on the term with catchy commercials.

The first mention of Fluffernutters in The Boston Globe came in a 1969 ad, more than four decades after the Curtises published their recipe.

“The sandwich itself was around from the beginning,” Jon Durkee acknowledged to Alverson.

“It just didn’t have the name Fluffernutter stuck to it,” he said, crediting the company’s advetising agency for the creation sometime around 1960.

But another four decades later, not everyone was as susceptible to that sweet jingle.

In 2006, Massachusetts state Sen. Jarrett Barrios moved to limit the ability of schools to serve Fluff, after his 8-year-old son asked him for a Fluffernutter.

“I’m at home and my son wants to make a Fluffernutter sandwich,” Barrios told the Globe at the time. “It turns out the Cambridge schools offer this as a nutritious lunch alternative to the meal of the day.” 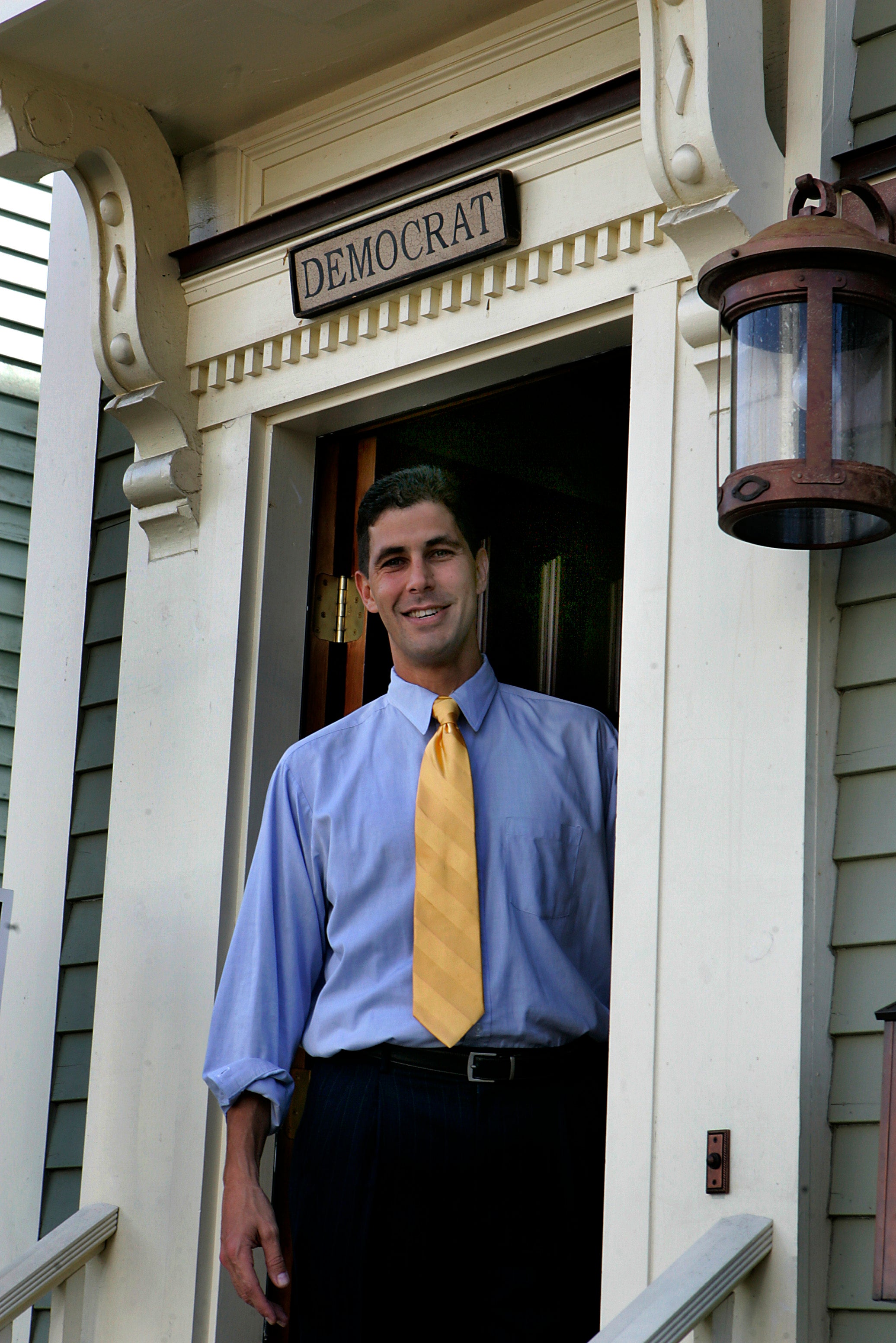 Even those at Durkee-Mower conceded the spread — made from corn syrup, sugar, water, egg whites, and artificial flavors — isn’t exactly a health food. Barrios went even further.

“I’m not sure we should be even calling it a food,” said the Cambridge Democrat, who is now the CEO of the Los Angeles branch of the American Red Cross.

Barrios’s amendment to a bill to regulate junk food in elementary schools would have prohibited Fluff from being served more than once a week. According to the Globe, he initially considered proposing an all-out ban, but decided against it after consulting other legislators.

Nevertheless, going after Fluff in its home state raised quite the furor, even garnering coverage as far as the opposite coast.

“A message board on the Boston Globe website nearly burst its cyberseams as Fluff fans recalled their childhood affection for a substance that looks remarkably like Styrofoam,” wrote the Los Angeles Times. “Others assailed Barrios for his legislative priorities.”

Cambridge Public Schools officials said they had no plans to stop serving Fluffernutters, which they said met their nutritional guidelines.

In retaliation, state Rep. Kathi-Anne Reinstein proposed a bill to make the Fluffernutter the official state sandwich of Massachusetts.

“We grew up on Fluff,” the Revere Democrat, whose district included Lynn, told The New York Times.

Neither proposals advanced at the time, though Reinstein’s bill did pass a voice vote during an informal House session in 2014.

Even Hanig — a native of the Midwest who became an avid Fluff fan relatively late in life — says she’s not sure if the Fluffernutter should be the state’s official sandwich — especially considering increased awareness regarding nutrition and peanut allergies.

But she says the gooey foodstuff taps into a local tradition of innovation.

“That it’s still being produced here in Massachusetts by the family that was producing it in 1920 speaks to Massachusetts and Somerville as a place that has real roots and history, while at the same time being a very ground-breaking and innovative region as well,” Hanig said.

In addition to featuring everything from Fluff cornhole to Fluff empanadas, Saturday’s festival will also cast a spotlight on the next era of innovation in the city, according to Hanig.

“Union Square Main Streets created What the Fluff? to revitalize Union Square, a bit run down at the time,” she said. Now, the evolving neighborhood contains everything from  a nationally acclaimed restaurant to multiple co-working spaces. 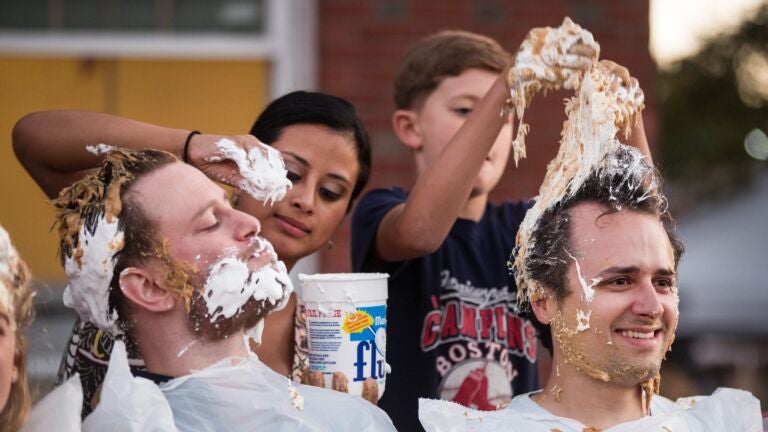