In less than a mile stretch in Quincy stand both the past and potential future of Dunkin’ Donuts.

The now-Canton-based company opened its first “next generation” concept store Tuesday in the same city where it all began nearly 68 years ago. And while the orange-and-cerise color scheme remains the same, the futuristic new Washington Street store is a distinct glimpse of what may lie at the end of Dunkin’s continuing reinvention.

Dave Hoffman, the president of Dunkin’ Donuts in the United States and Canada, says the 2,200-square-foot prototype showcases a wide array of experimental features.

“This exact prototype won’t be the scalable version, but it’ll be pretty close,” he said. “I wanted to put everything in here.”

Starbucks customers will recognize some of the new elements, while other elements are completely unique.

For example, the store has two drive-through lanes: one for traditional drive-through orders and one for mobile pre-orders through the Dunkin’ Donuts app, which allows drivers to bypass the ordering kiosk and merge directly into line for the pick-up window, where they give their name and receive their order. Hoffman says its the first restaurant brand in the country with a designated lane for mobile orders.

“Nobody’s been able to crack it in drive-through,” he said.

According to Hoffman, mobile orders make up 3 to 4 percent of the company’s transactions, a fraction which he says they’re hoping to grow. 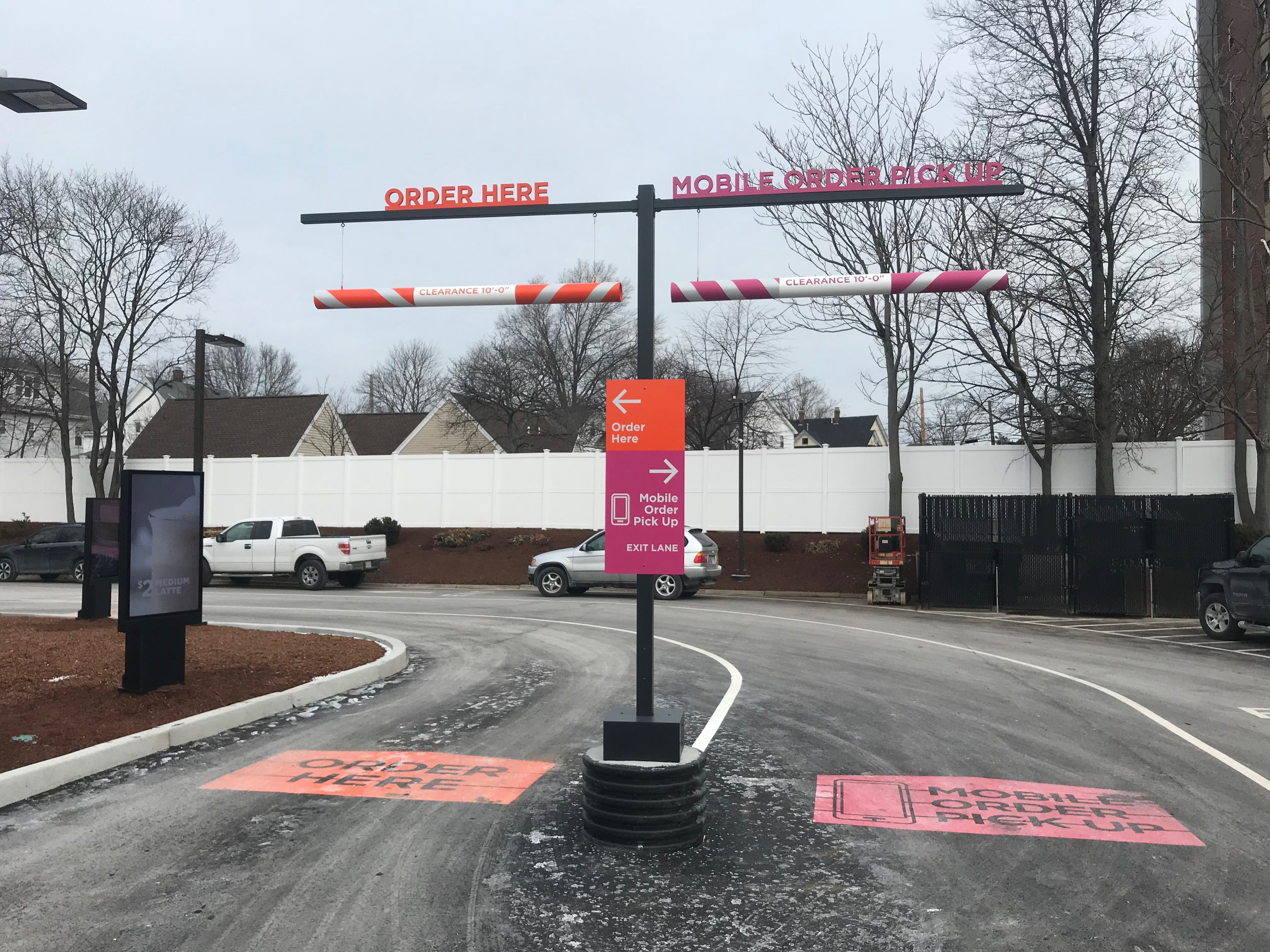 “There’s a second window, so when you have big orders — say the mom comes in and she’s got five sandwiches and two boxes of doughnuts — and then you got three workers who just want a cup of coffee, we can tell them to pull forward and wait at that next window, and get more cars through,” Hoffman said.

Inside, the Quincy location features digital menu boards and a sleek design, as well as an upfront glass bakery case to display doughnuts and other baked goods. The company also plans to install digital ordering kiosks inside the store later this year.

Live from Quincy, MA, we’re showing you our first store of the future concept! 🎉

However, currently perhaps the most striking feature is the bar-like tap system, which pours eight different cold beverages from iced coffee to iced tea to the line of nitrogen-infused cold brew the chain began testing last May.

“We think our personality is more bartender rather than sommelier,” Hoffman said, adding that the tap system evokes “the Dunkin’ blue-collar soul.” 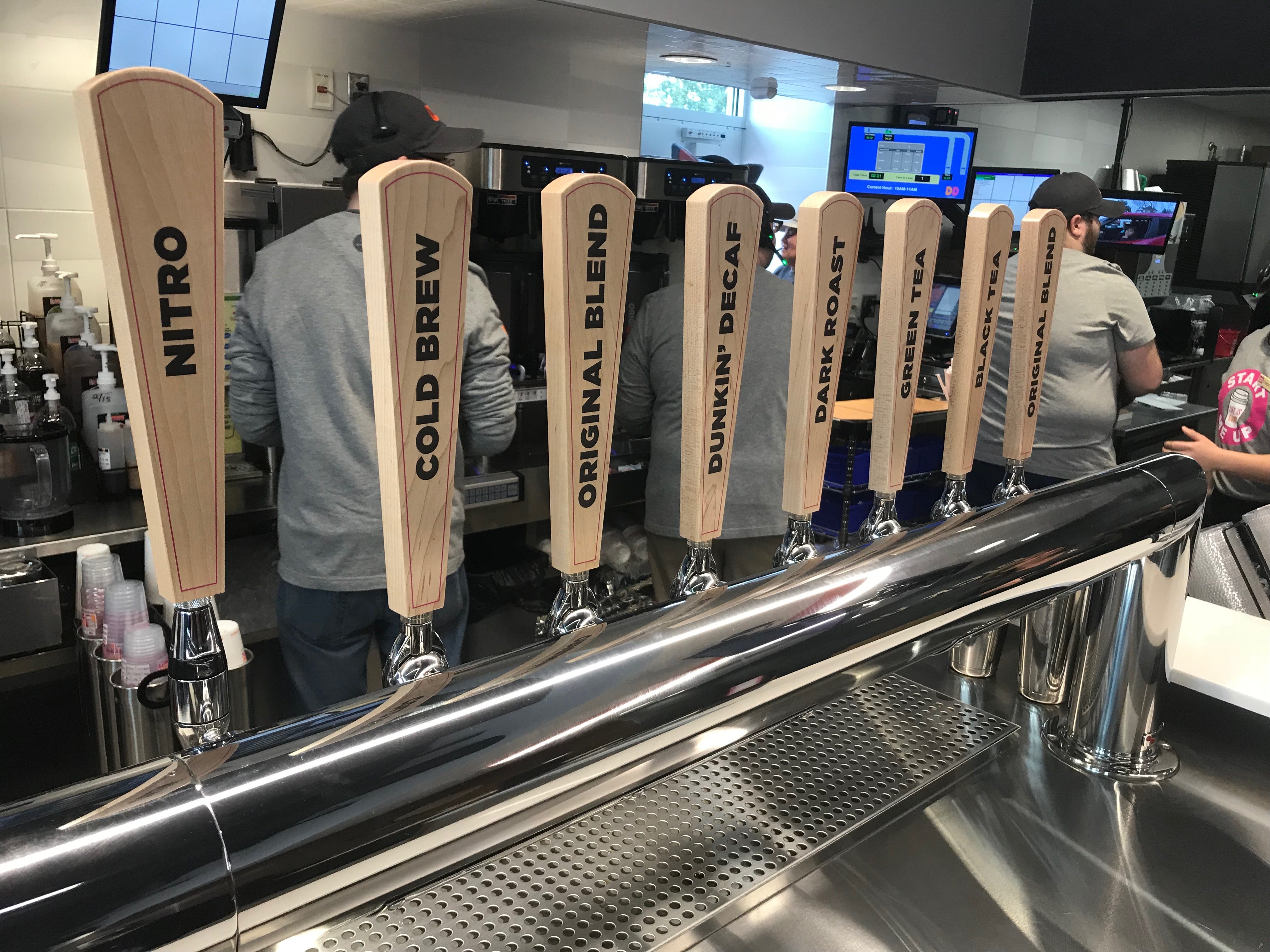 The eight-tap system inside the new Dunkin’ concept store in Quincy.

At the same time, many other features mimic the company’s Seattle-based rival. From the mobile pick-up area to the grab-and-go snack offerings to the the paper-fiber cups adorned with order labels, the concept store in many ways has the look and feel of a Starbucks.

Another thing the prototype shop has in common with Starbucks: It’s just the third Dunkin’ Donuts store with a one-word name. Already in use at locations in California and Boston, the “Dunkin'” signage is part of the brand’s efforts to reinforce it’s image as a beverage and coffee leader, a company spokeswoman previously told Boston.com.

While Dunkin’ Donuts has said it won’t make any permanent decisions regarding its branding until the second half of 2018, the new concept store seems intent on driving that point home. Hopefully, in Quincy, where the original location’s retro cursive font still looks out on the Southern Artery, it isn’t too close to home. 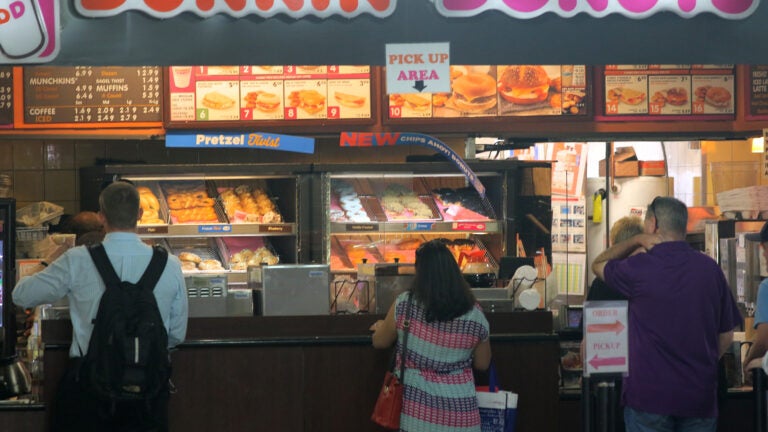