With the worst of winter still to come, several companies have joined together with a Boston institution to help stave off hunger during the weeks ahead. And they’re using 2.5 tons of meats and cheeses to do it.

“There’s something really special about bringing three separate teams together for the same cause. I thought it was very impactful,” said Taylor Grissinger, New England retail marketing manager of Dietz & Watson. “The food bank was very grateful for that.”

This is the deli company’s third year working with Roche Bros. and donating to the food bank as part of their in-store program, Families Helping Families.

The program is a Dietz & Watson charitable purchase initiative run in partnership with varying supermarkets around the country, which invites consumers to purchase products at their local retailers, and for every pound of meat or cheese bought, a donation is made back to support a local charity chosen within the retailer’s community.

And based on a percentage of shopper purchases made during the family program, which ran from November through December, that donation added up to 2.5 tons of meats and cheeses.

“Because we’re growing sales as a service deli, we’re able to increase our donations,” Grissinger said.

In the past, she said, the company would donate money, but came to realize a product donation was more impactful, noting how the food bank said their 2.5 tons of food will turn into 15,000 possible meals.

In Mass., one in 11 people reportedly struggle with hunger and one in nine are children, according to Feeding America’s Map the Meal Gap 2019 study.

GBFB, a member of Feeding America, reports that it provides over 68.5 million pounds of healthy food each year, feeding more than 142,000 people each month through its network of 530 member agencies in the 190 cities and towns across Eastern Mass.

Since Grissinger works on the cause from the inside, she said she often can’t see that impact, but knowing it’s there is just as valuable.

“One of our pillars is family and community so it was really important for us to not only say we were making an impact behind the scenes, but to actually get out there and touch people’s lives,” she said. “It’s important for us to be wading into these important issues like hunger relief.” 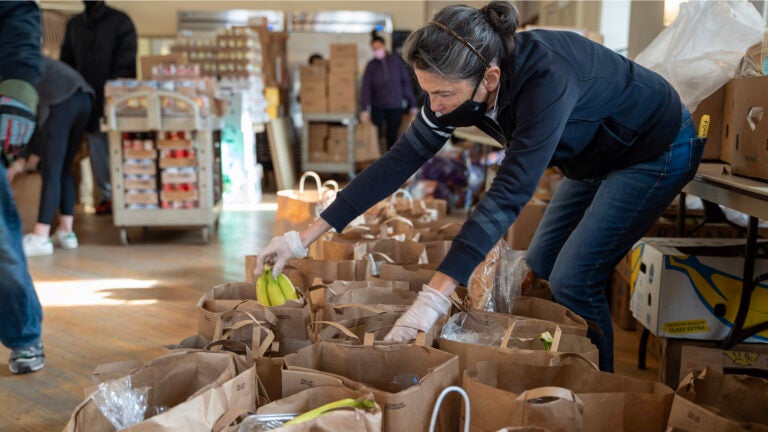 Food insecurity continues to rise in Massachusetts. Here's how you can help.