If you have the flu, health officials want you to do your part and stay home to help prevent spreading the illness.

The 2017-2018 flu season got off to an early start in Massachusetts, and it has already quickly made its way through thousands of state residents, according to Dr. Larry Madoff, director of Epidemiology and Immunization at the Massachusetts Department of Public Health.

“We have a high level of influenza like illness in the state and a high number of laboratory confirmed flu cases,” he said. “And those represent only a small fraction of the actual number of people who have influenza.”

It’s not just Massachusetts. The Centers for Disease Control and Prevention is reporting widespread flu activity across most of the United States.

Madoff said there have been 1,200 laboratory-confirmed cases of flu reported to the Massachusetts Department of Public Health since the start of October, which is well above the number normally seen this time of year.

Last year at this time only about 300 cases had been reported to the state agency, he said.

The state is also already seeing an increase in hospitalizations due to the flu, but Madoff said that was to be expected given the early start of the season.

Nationally, the CDC estimates that the flu results in the hospitalization of between 140,000 and 710,000 people each year.

Why it’s bad this year

Madoff said it’s normal for flu seasons to vary in severity from year to year.

“This one does seem earlier and more severe than usual, but it’s not out of the range of what we’ve seen in past seasons,” he said.

The doctor said it isn’t fully understood what causes the flu season to be different each year, but said one of the potential factors this year is that one of the strains of the illness that is circulating — H3N2 — tends to cause more severe disease and affects older people more so than younger people.

The immunity of the population, which varies from year to year, how many people get the flu vaccine, and the weather can also impact how severe a season becomes.

“The flu is typically associated with cold, dry weather,” Madoff said. “And that’s certainly something we’ve been seeing.”

The effectiveness of the season’s flu vaccine also plays a role.

Is the vaccine effective?

According to the CDC, the preventative shot typically reduces the risk of flu illness by about 40 to 60 percent when most of the viruses are similar to the vaccine strains.

However, the vaccine is generally less effective against the H3N2 strain being seen this year, Madoff said.

Last season’s flu vaccine had an effective rate of 39 percent overall, but was found to be about 32 percent effective against H3N2 viruses, according to the CDC.

“Our best guess is that it will be similarly effective this year,” Madoff said. “But it’s hard to know what’s going to happen until we actually look at the data with hindsight.”

Why you shouldn’t be worried about the ‘Aussie flu’

The concern raised at the start of the flu season was that the U.S. would see epidemic levels similar to those experienced by Australia, which sees its flu season during the North American summer. In Australia, the flu vaccine was found to be only about 10 percent effective against the dominant strain circulating for its 2017-2018 season — H3N2.

But Madoff said that while it’s true H3N2 can cause more severe disease, he doesn’t think it merits its own name.

“The H3N2 we’re seeing this year in the U.S. is very similar to the H3N2 we saw last year,” he said. “And the vaccine effectiveness we saw here [last year] was considerably higher than it was in Australia.”

According to the Times, Americans who contracted H3N2 last year should be immune this year. That advantage, according to the newspaper, coupled with the fact that fewer Australians are immune to the flu since the vaccine is only recommended for health workers or people who are at a high risk, suggests that the U.S. should not see the same levels.

How severe it may be 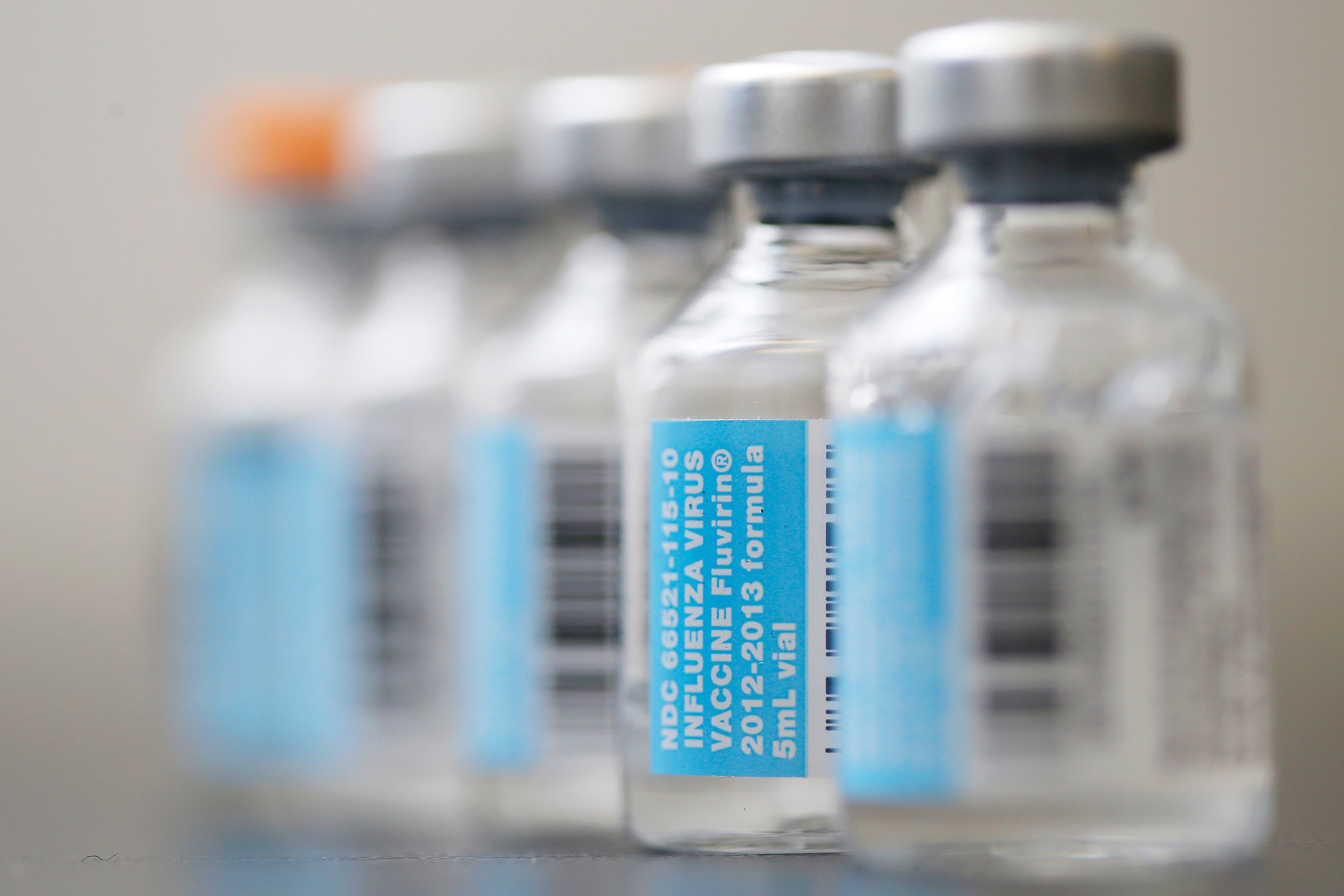 Thousands of flu-related deaths occur each year, according to the CDC, and the federal agency estimates that since 2010 there have been between 9.2 million and 35.6 million cases of the illness each year.

So far this year, California alone is reporting that 27 people under the age of 65 have died of the flu since October, the Los Angeles Times reports. Officials in New Hampshire say there have been five flu-related deaths among adults so far this season, but the illness is not considered widespread in the state.

The family of a Needham woman who died last week told WCVB Wednesday she died from complications of the flu.

Madoff said the state only gets reports of pediatric deaths attributable to the illness.

“We think that in a typical flu season there are hundreds of deaths that are caused by the flu in Massachusetts,” he said.

The flu, and especially this year’s H3N2 strain, tends to particularly affect older people. But very young children, pregnant women, and people with long-term health conditions, like asthma or heart disease, are also vulnerable to complications from the flu like pneumonia.

Given the severe strain circulating, Madoff said he “would not be surprised” to see more severe illness, hospitalizations, and deaths.

“It is a bad flu season and an early flu season, but it’s hard to predict what’s going to happen next,” he said. “We don’t really know if it’s just going to level off, if it’s going to end early. A typical flu season lasts three or more months, so just by law of averages we don’t expect this to end much before March.”

What you can do if you get the flu

If you haven’t already, Madoff recommends getting a flu shot, which will still take a few weeks to become effective once you get it.

“We are encouraging everyone 6 months of age and older to get a flu shot,” he said. “That is the best thing that they can do to prevent the flu themselves and also to protect the people around them from getting the flu from them.”

Washing your hands often, avoiding touching your eyes, nose, and face, and avoiding close contact with people who are sick are other ways to help prevent the flu.

If you do get the flu, you should stay home to keep the illness from spreading to others.

Health officials are also reminding providers that there are antiviral medications to treat the flu — like Tamiflu — which are most effective when administered within 48 hours of getting sick.

#FightFlu in 2018. Take these 3 actions to keep yourself & your family healthy.

Madoff said if you are experiencing symptoms of the flu — fever, muscle or body aches, sore throat, headaches — you should contact your doctor and find out what treatment options might be available to you.

“We particularly recommend it for people who are at higher risk for complications of the flu,” he said.

Those at a higher risk for complications from the flu should be especially cautious if they find themselves with the illness.

Madoff said to watch for symptoms like difficulty breathing, a cough that produces a lot of sputum, loss of consciousness, and difficulty staying hydrated. 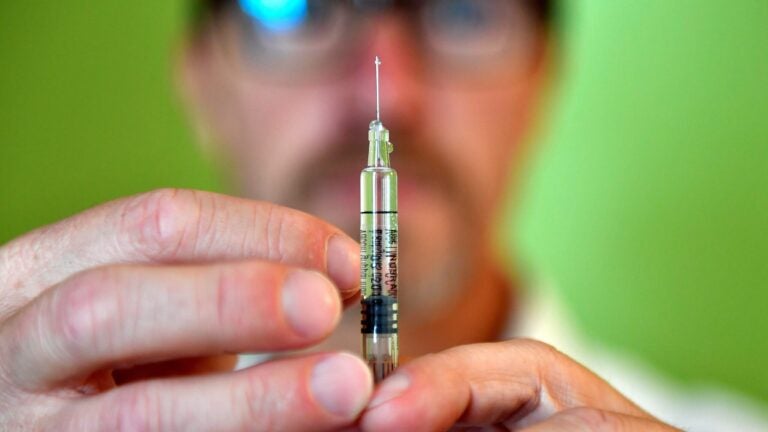