Nearly a month after spring water from a Haverhill company was found tainted with toxic chemicals, gallon-sized jugs of it are still stocked on supermarket shelves across New England, despite a health advisory from state health officials that pregnant women, nursing mothers, and infants should not consume the water.

Last month, as officials in New Hampshire were completing new standards to reduce exposure to per- and polyfluoroalkyl chemicals, part of a national push to tighten their regulation, they decided to conduct a random sampling of bottled water sold at supermarkets in the state, something rarely done.

The results showed that water from Spring Hill Farm Dairy in Haverhill had sharply elevated levels of the human-made chemicals, known as PFAS, which have been linked to kidney cancer, low-infant birth weight, and a range of diseases.

That water has been sold for years, under different in-house brand names, at Whole Foods, CVS, Stop & Shop, Market Basket, Roche Brothers, and elsewhere. It has also been sold by Cumberland Farms and Garelick Farms. Most of the brands cite the farm on their labels.

After the New Hampshire Department of Environmental Services alerted their counterparts in Massachusetts to the elevated concentrations, the Massachusetts Department of Public Health issued a “consumption advisory’’ earlier this month on its website, alerting pregnant women, nursing mothers, and infants not to drink or cook with the company’s water.

But health officials didn’t require the stores to warn their customers or issue a recall for the water, although some have done so voluntarily.

“Given our new health-based standards for drinking water, we wouldn’t recommend that anyone in the public drink this water,’’ said Jim Martin, a spokesman for the New Hampshire Department of Environmental Services.

Officials at Spring Hill Farm defended their decision to continue selling their water.

“There is no reason to do a recall,’’ said Nancy Sterling, a company spokeswoman, noting that there’s no such legal requirement. She also emphasized that the chemical levels in the water were within federal guidelines.

PFAS, called “forever chemicals’’ because they never fully degrade, were developed in the 1930s as nonstick and waterproof coatings and have since been used in products such as flame retardants, pans, pizza boxes, clothing, and furniture.

Ground-water wells on military installations have been shown to contain high levels of the chemicals, often as a result of a firefighting foam used on the bases. In Massachusetts, the chemicals have been found in levels that exceed federal guidelines in public water supplies in Ayer, Barnstable, Mashpee, and Westfield.

The chemicals have also been found in the public water supplies in Danvers, Harvard, and Hudson.

But more than half of the state’s municipalities have not had their drinking water tested for the chemicals, according to data from the state Department of Environmental Protection. Many more private wells have not been sampled, and until New Hampshire conducted its recent tests, there has been little to no government sampling for PFAS in bottled water, which has fewer testing requirements than public water supplies.

“People think that if a product is on the shelves, it’s safe. That is simply not true,’’ said Kyla Bennett, director of Public Employees for Environmental Responsibility in New England and a former EPA scientist. “In this country, toxic chemicals are treated like people who have committed crimes: innocent until proven guilty.’’

“Until Massachusetts comes up with a protective regulatory standard, there really isn’t anything else that can be done,’’ Bennett said.

Federal and state environmental officials have been considering whether to adopt stricter limits for PFAS compounds. Massachusetts now requires that new public water supplies be tested for six PFAS chemicals before they’re connected to residents’ homes.

But a state survey last year of the 181 state-permitted bottled water companies that sell their products in Massachusetts found that just three are testing for the chemicals.

While the toxins found at Spring Hill Farm were far higher than New Hampshire regulations now allow for the two most common PFAS chemicals, Massachusetts public health officials noted that they remain within current acceptable levels in the Bay State.

“Although test results did not indicate an acute threat to public health, DPH issued the advisory out of an abundance of caution,’’ said Ann Scales, a spokeswoman for the Department of Public Health. “Once tests confirm that PFAS has been reduced or removed, DPH will remove the consumption advisory for this label.’’

In New Hampshire, officials said they have no legal basis to compel a recall or demand their supermarkets alert their customers.

“We don’t have that authority,’’ Martin said.

Officials at Spring Hill Farm, which last week installed a new filtration system in an effort to eliminate the chemicals, initially said that the cause of the contamination was likely external, such as machinery.

They later said that chemicals were found at the water’s source, even as they continued to distribute the water.

Sterling, the company’s spokeswoman, said the farm spent $100,000 on the filtration system “because they want their customers to have the best possible product.’’

She said the FDA has tested the company’s water and it has “met all the standards.’’ FDA officials did not respond to messages seeking comment.New Hampshire’s new rules are far more stringent than the federal guidelines.

Sterling said the company has alerted its customers to the contamination and noted that the Massachusetts advisory is “only for women who are pregnant or lactating or infants.’’

But scientists and public health advocates say the chemicals pose a broader risk.

In a study published last year, Harvard University researchers concluded that children should not consume water with concentrations of the chemicals greater than 1 part per trillion, calling the health risks “greatly underestimated.’’

The EPA has no legally binding regulations on PFAS chemicals but recommends that municipalities alert the public if the two most common PFAS chemicals reach 70 parts per trillion. Massachusetts uses the same limit for five of the chemicals.

One part per trillion is about as much as a grain of sand in an Olympic-size swimming pool.

“Consumers deserve to know when there are high PFAS concentrations in the bottled water, so they can make an informed choice,’’ said Elsie M. Sunderland, a professor of environmental chemistry at Harvard who called the lack of a recall “really concerning.’’

Some supermarkets that sell water from Spring Hill Farm have taken action.

Officials at Market Basket, which labels the bottles Market Basket Spring Water, said they have removed the company’s water from its shelves but are open to selling its newly filtered water.

“Market Basket has been monitoring the situation,’’ said Justine Griffin, a company spokeswoman.

CVS has halted shipments of water from Spring Hill Farm, which it has sold under the label “Ice Canyon.’’ “We are using other bottled water suppliers who have not identified any PFAS issues,’’ said Mike DeAngelis, a CVS spokesman.

Customers can return the water for a refund, he said.

But the water remains on the shelves at other supermarkets, including Stop & Shop and Whole Foods, where, under the 365 label, large jugs of the water produced last month were being sold for 89 cents at their stores in Boston.

At Stop & Shop, which sells the water from Spring Hill under the Acadia label, officials said they take the issue “very seriously.’’

But the water, which has an expiration date good for another two years, remains stocked on their shelves. 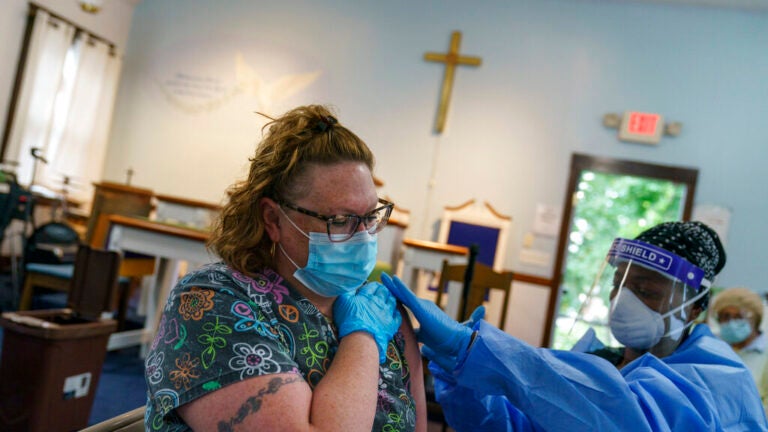