Schools across the country are grappling with an epidemic of vaping among their students, with adolescents concealing vapes in their sweatshirt sleeves, sneaking puffs in school bathrooms and selling vapes – illegal for minors – in the hallways of high schools.

Now, four school systems are suing the e-cigarette company Juul, saying it targeted teenagers in marketing and spurred the epidemic that has sapped schools and educators of time and resources as they reckon with how to help students hooked on the popular product.

The lawsuits come as officials struggle to contain an outbreak of mysterious illnesses and deaths linked to vaping – although most cases involved patients who vaped THC, the active ingredient in marijuana.

Juul did not respond to a request for comment on the lawsuits, but in the past it has defended its products by saying they were designed to help adult smokers quit. The company also has shut down social media accounts and stopped sales of flavored products to retail outlets in an effort to curb teens’ use.

More than 1,000 people have been sickened and at least 21 people have died in connection with vaping. On Tuesday, New York Gov. Andrew Cuomo, a Democrat, reported that a 17-year-old boy from the Bronx had died of a vaping-related illness, the youngest victim and the first teen.

Even as investigators focus on black-market THC products as the root of the illnesses, many states have moved to curb all vaping, cautioning all users to quit or banning the sale of vaping products. Pediatricians warn that little is known about the long-term effects of vaping and report seeing alarming symptoms in young people who become addicted to nicotine.

Meanwhile, statistics show vaping rates have been rising among adolescents. About 1 in 9 high school seniors reported vaping nicotine on a near-daily basis, according to a government-funded survey, and a quarter reported vaping at least once in the past 30 days.

“The lawsuits that we filed . . . were the first in what we fully anticipate will be many, many more to follow in the coming weeks and months as many school districts have decided to go on the offensive to combat the epidemic of youth vaping in the nation’s schools,” said Jonathan Kieffer of the Kansas City, Missouri, law firm Wagstaff & Cartmell, which is representing three of the school systems. “America’s schools are truly on the front lines of this epidemic, which has crossed all geographic and demographic lines and is increasing at an alarming rate in all regions of the country and impacting urban, suburban and rural schools.”

Schools have expended time and resources cracking down on students caught vaping. Some purchased pricey devices to detect vapor from e-cigarettes in school bathrooms. The fallout has also included expenses related to discipline, with student suspensions skyrocketing in some schools. In the Francis Howell School District, suspensions for nicotine infractions more than quadrupled over the past four years, with 248 students punished in the 2018-2019 school year, according to the lawsuit.

School systems said the epidemic has sapped staff time. Some districts have hired additional staff members to monitor bathrooms and tutors to help students who miss school for vaping-related infractions. Other districts are losing state funding because of the number of students they suspend for vaping.

The Washington Post’s Magda Jean-Louis contributed to this report. 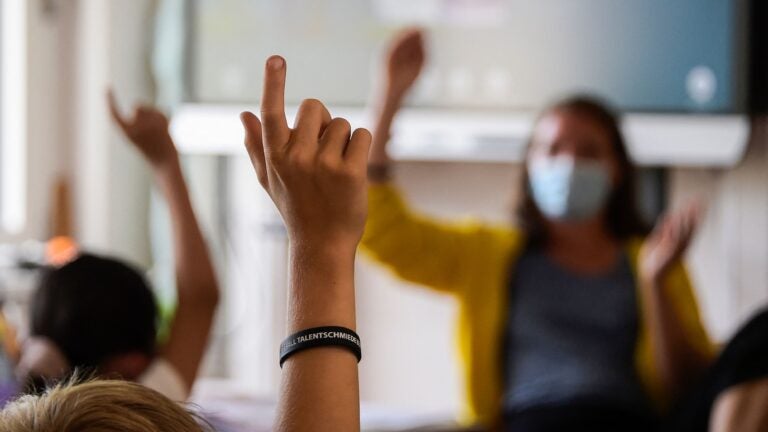 An elementary school teacher took off her mask for a read-aloud. Within days, half her class was positive for delta.