Leading health organizations recently released their first consensus recommendations about what young children should be drinking: only breast milk or, if necessary, infant formula until a baby is six months old, with water introduced around then, and plain cow’s milk at around their first birthday.

That’s it. No juice, no flavored or plant-based milks, no caffeinated beverages or sodas.

The good news is parents of infants seem to be on the right track – breastfeeding is on the rise. But once children get into the toddler zone, it’s pandemonium.

There’s been a boom in unhealthy foods and beverages for children six months to 3 years old, packaged for convenience and often promising to make children stronger and smarter.

Billy Roberts, senior analyst of food and drink at market research firm Mintel, says that there were four times more product launches in the baby and toddler food aisle in 2018 than in 2005, with a huge surge in new toddler foods and drinks, most of which are extremely high in sugar.

What’s driving this surge? Experts point to several factors. Parents are demanding convenient, on-the-go packaging. Industry’s lust for market share has driven advertising aimed at parents of toddlers. And there’s been little nutritional guidance for new parents, who glean what they can from parenting chat rooms, family lore and pediatricians, many of whom had only a single class on nutrition during medical school.

With more dual-income families, convenience has become central to beleaguered parents passing packaged snacks back to hungry and/or bored toddlers in car seats kitted out with cup holders and snack wells.

“Americans are snackers,” said Mary Story, a professor of global health, and family medicine and community health at Duke’s Global Health Institute. “And the food industry is always looking for novel ways to market their products and increase demand.” 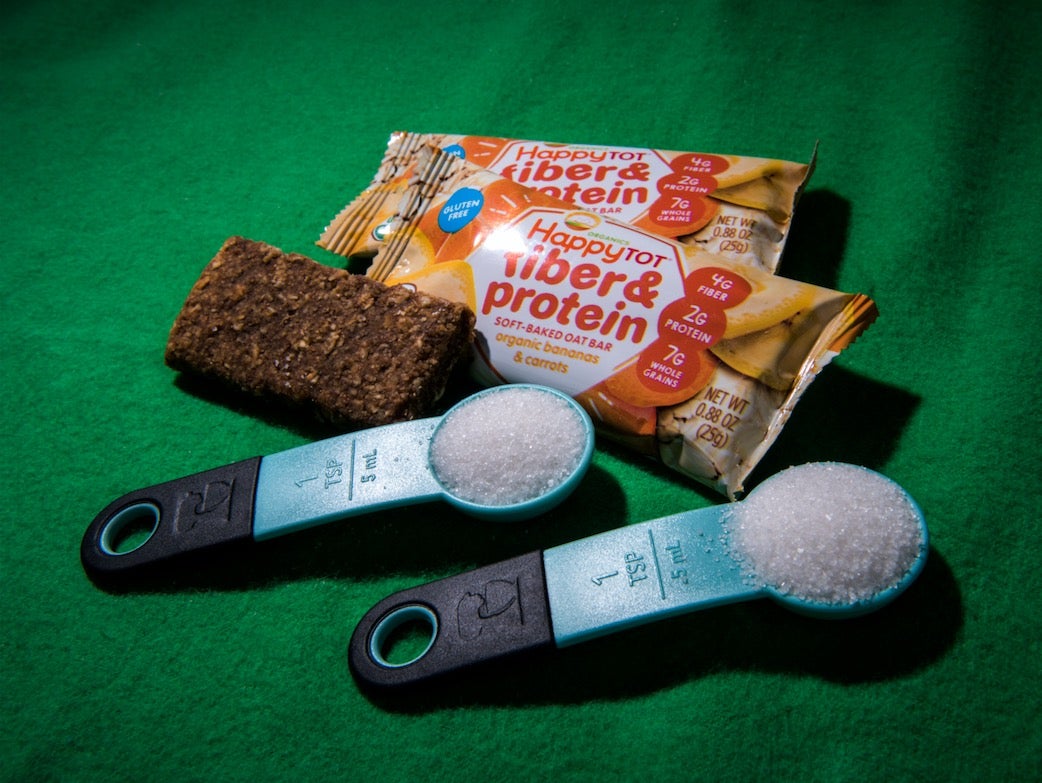 A snack bar for children contains 2 teaspoons of sugar per serving.

For a scientific report for the 2015 Dietary Guidelines Advisory Committee, her team found that 29% of toddlers’ calories were coming from snacks, most of which were salty or sweetened processed foods, not fruits and vegetables.

Jennifer Harris leads a multidisciplinary team of researchers at the University of Connecticut that studies food marketing to children, adolescents and parents, and how it affects diets and health.

She says that toddler snacks are often positioned as healthier than those for adults.

“But we didn’t find that to be the case in terms of added sugar, sodium, saturated fat and calories,” Harris said. “You wouldn’t give your toddler Cheetos, but you would give them Gerber puffs, which are basically the same thing.”

A yogurt-based Happy Baby snack for children contains a teaspoon of sugar per serving, with four servings per pouch. Happy Tot’s organic bananas and carrots fiber and protein bar contains 2 teaspoons of sugar per serving. Happy Family Organics did not respond to requests for comment.

Lorrene Ritchie, director of the Nutrition Policy Institute at the University of California Division of Agriculture and Natural Resources, worries that low-income parents will be more inclined to spend their money on these heavily advertised baby foods, toddler milks and packaged snacks at the expense of healthier options.

“The amount of funding spent to promote healthy foods, which is mostly via federal nutrition education dollars such as WIC and SNAP-Ed, is dwarfed by food marketing which is mostly for unhealthy and ‘treat’ foods and beverages,” she said. “I fear we will never make a big dent in diet-related chronic disease until we level this playing field.”

Researchers found that children who watch 80 minutes of television per day view more than 800 ads for junk food annually. Toddlers and preschoolers are particularly vulnerable because they can’t distinguish between programming and promotion and don’t yet understand the intent of advertising to persuade.

Infants need to eat about 35 to 50 calories for each pound of their weight, largely to fuel the first year’s rapid growth spurt. That growth slows for toddlers, requiring 35 to 40 calories per pound, according to guidelines from the Institute of Medicine. If a toddler eats a total of 1,200 calories that includes Gerber sweet potato puffs (25 calories and 6% of a day’s carbs per serving) or Welch’s fruit snacks (80 calories and 11 grams of sugar per serving), that may squeeze out the healthy stuff.

Those decisions have consequences. The Centers for Disease Control and Prevention says that nearly 14% of 2- to 5-year-olds are obese (above the 95th percentile for body mass index), a percentage that is higher for African Americans, Hispanics and low-income Americans. A new study says that in the United States, childhood obesity alone is estimated to cost $14 billion annually in direct health expenses.

THE RISE OF TODDLER MILKS

What babies and toddlers drink is equally impactful. Nearly four decades ago, Nestlé was villainized for convincing Third World mothers that infant formula was better than breast milk. In 1981 an international code limiting the marketing of breast-milk substitutes was ratified by the World Health Organization and was adopted by most countries, but not the United States, Harris said.

“The code was designed to protect consumers from unscrupulous marketing,” she said. “When infant formula is marketed to parents, it is positioned as convenient and more scientific because it’s a ‘formula,’ and that it’s an acceptable – if not a better – alternative to breast milk. All of that is prohibited under the code.”

As a result of the marketing prohibition, sales of formula for infants lagged. The multinational companies behind the $55 billion global baby food and formula industry had to expand their customer base, inventing new products. They developed follow-up formulas for children six months and up, often called “growing-up milks” or “toddler milks.”

Frequently marketed for picky eaters, these milks prey on parents nervous about the frequency and quantity of toddler feedings. They often make nutrient claims – “DHA and iron to support brain development” – but Harris said there are no legal requirements that these front-of-package claims be supported by sound scientific research. These products are typically composed of powdered milk, corn syrup solids and vegetable oil, with more sodium and less protein than whole cow’s milk. A Go & Grow toddler drink from Similac contains 150 calories, with 15 grams or 3 1/2 teaspoons of sugar per serving.

A statement from Abbott Nutrition, Similac’s parent company, said that Go & Grow by Similac does not contain added table sugar.

“The formula’s main ingredients are nonfat milk and lactose – lactose is the naturally occurring milk sugar found in both breastmilk and cow’s milk. It’s a carbohydrate that provides an important source of energy for growing children.”

Toddler milks are more expensive than cow’s milk and aren’t covered by food assistance programs like WIC. They are often purchased by higher-income parents eager to give their children every possible advantage. A milk-based “toddler drink” contains 3 1/2 teaspoons of sugar per serving.

But there’s been an unintended, and potentially dangerous, development. Toddler milks are cheaper than infant formulas, which are more nutrient dense, with stricter composition requirements and Food and Drug Administration oversight. Frequently the packaging for infant formulas and toddler milks can look the same, which may lead to instances of infants being fed these nutritionally insufficient products by families trying to economize.

“We’ve done a paper on what the FDA should establish for toddler milks, because there’s no statement of identity and they are called all different things,” Harris said. “There needs to be clear labeling about the ages the product is intended for, and they need to make sure the packet looks different from infant formula. There just aren’t that many people talking about these things. The research hasn’t caught up with the market.”

There are bright spots in the baby-toddler nutrition world. Long dominated by the tiny glass jars of Gerber and Beech-Nut, entrepreneurs are launching healthier brands in convenient pouches and in the refrigerated aisle of the grocery store.

Most of these newcomers are significantly more expensive than Gerber and Beech-Nut, putting them out of reach for low-income parents. And WIC, which feeds about half of the 4 million babies born in the United States each year, has not approved pouches, sticking with more established shelf-stable glass jars that are often anchored by sugary fruit purees.

The government does not have guidelines for daily sugar limits for children under 2. But for children between 2 and 18, a limit of 25 grams of sugar is recommended. In a recent analysis of 469 conventional baby foods in the United States, 35% contained more than 10 grams of sugar in a 4-ounce, single-serve jar or pouch. As a point of comparison, a regular-sized Snickers bar has 20 grams of sugar.

Rick Klauser, chief executive of vegetable-forward Sprout Foods, said major brands take advantage of government loopholes that don’t require fanciful nutrition and ingredient labeling on the front of packages to match up with the order of ingredients on the back.

“Consumers are already frustrated, they think they know what they are feeding their babies, but there’s a gap in my mind between what we’re telling people and what we’re feeding them,” he said.

Klauser said that cleaning up communication on labels is crucial for toddler food products, and that the return on investment will be seen in the reduction of health-care costs.

“By 18 months” he said, “a child’s nutrition journey is more or less forged.” 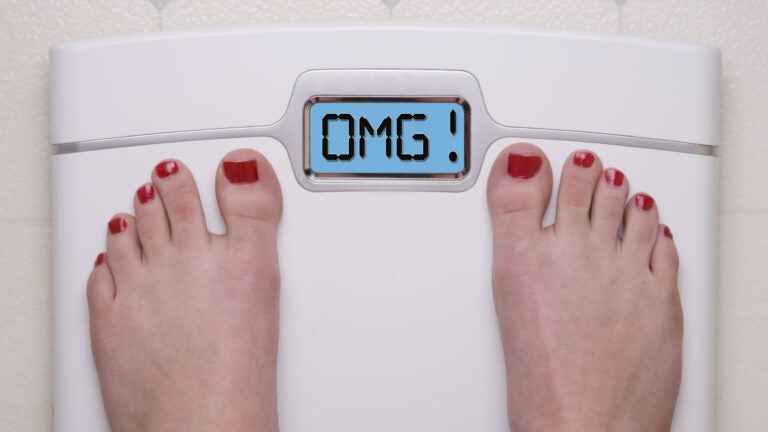 'I exercised for about four months, then everything just seemed too hard'