Massachusetts is in the midst of a bad flu season.

Communities across the Bay State are reporting high influenza-like illness activity, the state Department of Public Health found in its most recent weekly flu report.

“It’s at historically high levels,” Dr. Larry Madoff, the medical director for the DPH Bureau of Infectious Disease and Laboratory Sciences, told Boston.com. “In terms of influenza-like illness activity, we’re still higher than we’ve been anytime in the last 10 years.”

During the week of Feb. 14, the state exceeded the 10-year high for influenza-like illness activity, set during the 2009 H1N1 pandemic, he said.

“We’re seeing it reflected in the numbers of lab confirmed cases in the [influenza-like illness] activity,” Madoff said. “The hospitalizations have been high, but not at historic levels. It may be that the flu that we’re seeing this season is a little milder than in past seasons or that may reflect some immunity that people have from vaccines.” 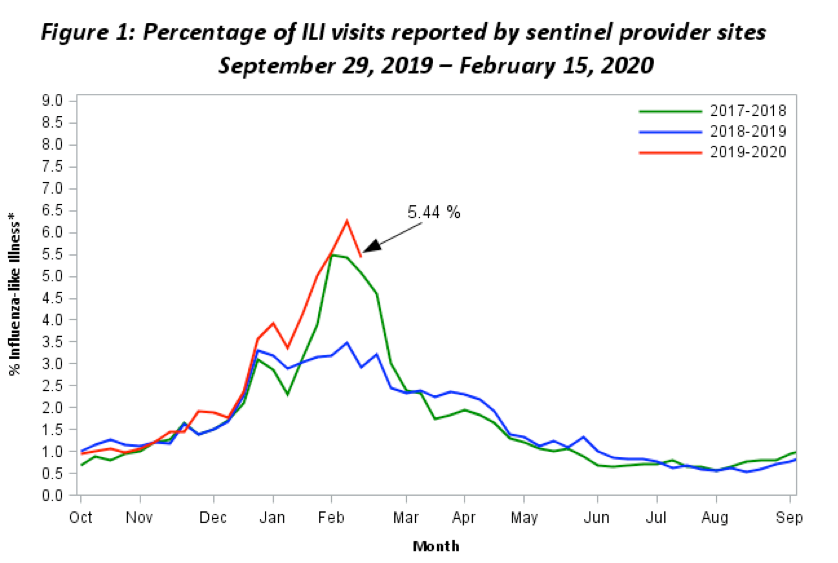 The state’s flu activity has decreased slightly — from “very high” in mid-February — but remains categorized as “high.”

The slight decrease may be an indication that Massachusetts has moved pass the flu season’s peak, Madoff said, but it could also still go up again.

“Historically, this would be the time that we’d expect the peak to occur,” he said. “It’s usually in late January or February, and then activity tends to diminish into the springtime. And that’s what I would expect. But it’s really too soon to say.”

The factors driving the historically high numbers aren’t clear yet, the doctor said. But one of the unusual elements of the 2019-2020 flu season has been that the state saw a wave of Influenza B, a strain of the virus that is traditionally thought of as causing a milder form of the flu and more common among children, early on. An outbreak of Influenza A, which is considered more severe, followed.

“What we’re seeing now is both flu B and flu A,” Madoff said. “And it may be that we’re going to see a prolonged season because flu A arose later and may persist longer.”

Both strains of the flu are contained in the vaccine. Madoff said initial vaccine estimates from the Centers for Disease Control and Prevention show its overall effectiveness is about 50 percent, which is not out of the ordinary.

“It’s sort of in the range that we’ve seen with flu vaccines in recent years,” he said. “It can range from, you know, 40 to 60 or 70 percent, but it’s not bad. It’s also important to remember that even if the vaccine doesn’t fully prevent you from catching the flu, it can make a flu case milder.”

It’s also not too late to get vaccinated, he emphasized, since the flu season will stretch into the spring.

And while the state continues to be concerned about the novel coronavirus, Madoff said Massachusetts residents should be more attuned to preventing the flu as the season progresses.

“That’s what you’re really going to get, and that’s something that you can prevent,” he said.

Only one case of the 2019 novel coronavirus has been confirmed in Massachusetts, in a man who had returned from Wuhan, China, the epicenter of the outbreak. Officials with the CDC said Tuesday that Americans should prepare for the eventual spread of the virus to communities in the United States, The New York Times reports.

Like the flu, the coronavirus spreads through respiratory droplets, and, like influenza, it can cause a spectrum of illness ranging from mild to severe and be fatal, Madoff pointed out.

“We know a lot less about it than we do the flu, so it is something that we’re concerned about and are monitoring closely,” he said. “What we do know is that right now there are tens of thousands of people in Massachusetts with influenza. And that’s a very contagious and serious disease and people should take measures to protect themselves from it.”

People with the flu should stay home, and those who are not ill should stay away from those who are. Frequent hand-washing and use of alcohol-based hand sanitizers will also help prevent the spread of the flu.

“People should cover their coughs and take care of themselves if they’re at risk of complications of the flu,” Madoff said. “If they’re elderly or very young or have other medical conditions, they should contact their doctor if they think they have the flu. Your risk of getting the flu is so much higher than your risk of getting coronavirus right now in Massachusetts.”