CONCORD, N.H. (AP) — A second New Hampshire resident has tested positive for the new coronavirus after being in close contact with the first, state health officials said Tuesday.

The first case, announced Monday, was a person who had recently traveled to Italy. The state on Tuesday issued an official order of isolation after learning that the man attended a private social event Friday despite having been told to stay home.

Dartmouth College said the man attended a Tuck School of Business social event in White River Junction, Vermont. In a statement to the college committee, leaders of the Dartmouth COVID-19 Task Force said everyone who had close contact with the man has been notified. None of them were students.

“We understand that this is a stressful time for many people in our community,” the statement said. “We remain in close communication with state health officials and DHMC and are coordinating efforts with colleagues across the institution to ensure everyone’s continued health and safety.”

The social event was at the Engine Room, a concert venue that also hosts private parties. Vermont health officials are asking any residents who were there Friday night to call the state health department.

“People in this situation – with only minimal possible contact with a case – are still considered to be at low risk for infection, but out of an abundance of caution the department is seeking contact from anyone in attendance,” said Dr. Mark Levine, the state health commissioner.

Meanwhile, Dartmouth-Hitchcock officials have identified staff members who may have been exposed. As of Tuesday, they were not aware of exposure to any patients in clinical areas.

Worldwide, more than 92,000 people have been sickened and 3,100 have died, the vast majority of them in China. Most cases have been mild. The number of infections in the U.S. overall has climbed past 100, scattered across at least 15 states, with more than two dozen cases in Washington alone. 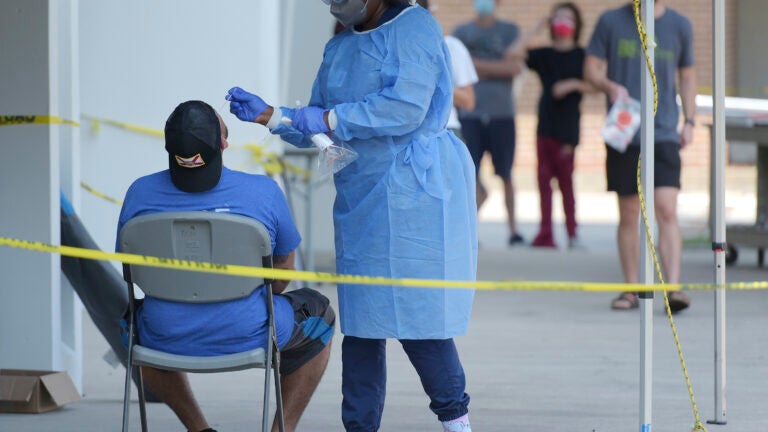