Jessica Breitschwerdt was already feeling anxious about giving birth to her first child. She signed up for a doula, a birthing class and a tour of the Maryland hospital where she planned to deliver in mid-May.

Then she saw an article, posted in a Facebook group for new moms, suggesting that infants had tested positive for the coronavirus. Soon after, she found out her hospital tour and birthing class were canceled. Then Holy Cross Germantown Hospital announced it was limiting visitors to one person per patient, which meant Breitschwerdt would have to choose between having her husband, her mother or her doula by her side during the most important day of her life.

Images of overcrowded hospitals in Italy came to mind and Breitschwerdt’s thoughts began to spiral: Would the onslaught of sick patients put her baby at risk? Would the hospital run out of available beds?

“That’s just scary,” she said. “There’s just so much unknown about it.”

On Tuesday, Breitschwerdt decided to change her plans. She called a certified nurse midwifery practice and scheduled a home birth.

As pregnant women across the country wrestle with anxieties about the potential impact of the pandemic, midwifery practices are reporting a significant uptick in requests for alternatives to deliveries in hospitals.

About 1 percent of all births in the country take place at home, and about 9 percent are delivered by certified nurse midwives, according to the Centers for Disease Control and Prevention. But the option of delivering at home or in a birth center has suddenly become a comforting alternative for scores of pregnant women worried about the spread of the virus in hospitals.

Midwives across the country are taking to social media to say their practices are at capacity through the summer. Some are accepting patients late in their third trimester, in rare instances planning a home birth a day in advance.

“We see six to ten births a month, and we had 12 inquiries yesterday,” Nannette Jenkins, a certified nurse-midwife at Riverside Midwifery in Buckeystown, Maryland, said Wednesday. “That’s two months’ worth of interest just yesterday. And I feel like that’s just begun.”

Other midwives are writing letters to medical providers and elected officials, asking them to lift restrictions on their practices so they can help relieve hospitals that will soon be overwhelmed. Some states require physician supervision for licensure of certified nurse-midwives, while other states do not grant licenses to midwives who are not also certified as nurses.

“We’re on the front lines,” said Nicole Cisneros Pegher, a certified professional midwife on the South Shore. “At a moment’s notice, I’m ready to go.”

“We’re on the front lines,” said Nicole Cisneros Pegher, a certified professional midwife on the South Shore of Massachusetts. “I wish that the government, that the powers that be, would recognize the strength of their home-birth community, because at a moment’s notice, I’m ready to go.”

It is still not known whether a pregnant woman with covid-19 can pass the virus on to her fetus during pregnancy or delivery. No infants born to mothers with coronavirus have tested positive for covid-19, according to the CDC. But a new study released this week in the journal Pediatrics suggests that young children, particularly infants, may be vulnerable to critical illness.

The CDC has also noted that, based on limited case reports, some adverse infant outcomes, such as preterm birth, have been reported among infants born to mothers who tested positive for the virus, but it’s not clear whether these outcomes were related to the mom’s infection. The CDC has encouraged hospitals to consider temporarily separating a newborn from a mother confirmed positive for covid-19 to reduce the risk of transmission.

A home birth would not reduce the risk of transmission of the virus to a newborn from a mom who is already infected. But some mothers worry that the high volume of infected patients in a hospital could put a baby at risk of contracting the virus in the hours and days after birth.

Obstetricians have sought to reassure their patients that in most hospitals, labor and delivery units are separate from areas designated for coronavirus patients.

“I’ve heard nothing about closing labor and delivery and using it as a containment unit for anyone who would have the coronavirus,” said Connie Bohon, an obstetrician and gynecologist in the District who is a fellow of the American College of Obstetrics and Gynecology.

Bohon urged pregnant women not to rush to change their plans to home births at the last minute. In the rare case that something goes wrong, she said, she wouldn’t want mothers in labor to rely on emergency services that may be strained from the pandemic.

But midwives are hoping to use this moment to send a message to pregnant moms and physicians alike: We can help.

“We are highly underutilized,” said Suzanne Wertman, a state government affairs consultant for the American College of Nurse-Midwives. “The pandemic is just exposing all of these weaknesses in the system.”

Midwives practice in hospitals, birth centers and patient homes, depending on state restrictions and a midwife’s level of certification. In many other countries, such as Sweden, Norway and France, midwives provide care for most expectant and new mothers. But in the United States, 22 states have placed restrictions on the licensure of nurse-midwives, Wertman said. While Washington D.C. and Maryland have fairly loose restrictions, Virginia is one of several states that requires a certified nurse midwife to provide proof of a collaborative practice agreement with a licensed physician, “which I call a permission slip,” Wertman said.

The cost of home births can also present a barrier to some midwifery practices that may not be credentialed for coverage by certain insurance providers.

A 2018 study in the journal PLOS ONE found that states that have done the most to integrate midwives into their health-care systems have some of the best birth outcomes. Others have suggested that expanding access to midwives could help address rising maternal mortality rates in the United States. Although midwives do not handle high-risk pregnancies, they cite the close relationships they develop with patients, and their emphasis on creating a comfortable, undisturbed space for childbirth as advantages over hospital births.

Across the country, midwifery practices are working to meet the increased demand while also working within the constraints of social distancing. At one midwifery practice, M.A.M.A.S. in Takoma Park, Maryland, prenatal group visits and belly checks have gone virtual. Mairi Breen Rothman, a certified nurse-midwife, has started meeting patients one-on-one at her home, in a room with a separate entrance, and disinfects the space carefully before and after each visit.

The practice has started hosting its information sessions via Zoom conference calls. While the usual sessions bring in about six to eight new potential clients, an online session Wednesday night drew 20 people, all interested in home births.

As couples watched from their kitchen tables, some with toddlers on their laps, one family asked the question on many of their minds: Does the practice take late transfers?

“Generally, we try not to take people after 32 weeks, but with this current situation, we are taking people on a case-by-case basis,” said Kathy Peacock, a certified nurse-midwife at M.A.M.A.S. The practice was booked full for July but still had some openings in May and June. “Just know that we are filling up very, very quickly with all of this,” Peacock said.

In Massachusetts, Ashley Henske was only a day away from her due date when she decided to make the switch to a home birth. Late Friday, she learned that her hospital was limiting visitors to only one person, meaning she wouldn’t be able to have her doula team by her side. She worried that the hospital may even prevent her husband from coming into the delivery room.

So the following day, she called a midwifery practice and asked whether it would be possible to arrange a home birth. She scrambled to shop for essential items in stores where cleaning supplies were selling out fast. She searched for plastic shower curtains and new sheets. Washcloths for compression during pushing. A crockpot to keep the washcloths warm throughout the labor. Her husband rushed to his mother’s house to borrow an exercise ball, which can be used to help induce labor.

The home birth went smoothly and eased her fears. But it also came at a cost: $4,000 out of pocket, with no coverage from her insurance.

It’s this high cost that is holding back many women who are interested in a home birth amid the pandemic.

Chelle Wilson, 34, of West Virginia is 27 weeks pregnant and terrified of giving birth in a hospital. She worries that people in her state aren’t taking the virus seriously enough, and the hospital will be swarmed with sick patients by the time her due date approaches. But she doesn’t know whether she and her husband, who works in retail, would be able to afford a home birth.

She has had six miscarriages in the past. And even though this pregnancy is considered normal, she is concerned about what might happen in the weeks to come.

“I’m sure every woman is anxious, but I had a panic attack the other night,” she said. “I can’t, I can’t lose another baby. I can’t describe the pain of losing six babies. It just scares me to death that that might happen again.” 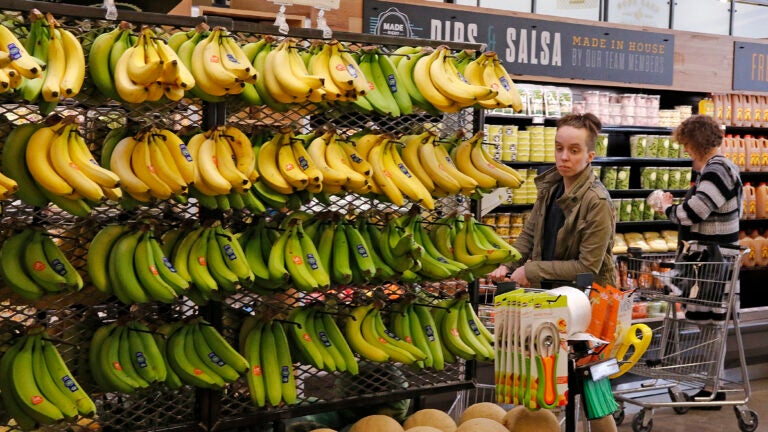 These Mass. supermarkets now have special hours for ‘at-risk’ shoppers