Viruses have spent billions of years perfecting the art of surviving without living – a frighteningly effective strategy that makes them a potent threat in today’s world.

That’s especially true of the deadly new coronavirus that has brought global society to a screeching halt. It’s little more than a packet of genetic material surrounded by a spiky protein shell one-thousandth the width of an eyelash, and leads such a zombie-like existence, it’s barely considered a living organism.

But as soon as it gets into a human airway, the virus hijacks our cells to create millions more versions of itself.

There is a certain evil genius to how this coronavirus pathogen works: It finds easy purchase in humans without them knowing. Before its first host even develops symptoms, it is already spreading its replicas everywhere, moving onto its next victim. It is powerfully deadly in some, but mild enough in others to escape containment. And, for now, we have no way of stopping it.

As researchers race to develop drugs and vaccines for the disease that has already sickened 200,000 and killed more than 8,700 people, and counting, this is a scientific portrait of what they are up against.

‘Between chemistry and biology’

Respiratory viruses tend to infect and replicate in two places: In the nose and throat, where they are highly contagious, or lower in the lungs, where they spread less easily but are much more deadly.

This new coronavirus, SARS-CoV-2, adeptly cuts the difference. It dwells in the upper respiratory tract, where it is easily sneezed or coughed onto its next victim. But in some patients, it can lodge itself deep within the lungs, where the disease can kill. That combination gives it the contagiousness of some colds along some of the lethality of its close molecular cousin SARS, which caused a 2002-2003 outbreak in Asia.

Another insidious characteristic of this virus: By giving up that bit of lethality, its symptoms emerge less readily than SARS, which means people often pass it to others before they even know they have it.

It is, in other words, just sneaky enough to wreak worldwide havoc.

Viruses much like this one have been responsible for many of the most destructive outbreaks of the past 100 years: the flus of 1918, 1957 and 1968; and SARS, MERS and Ebola. Like the coronavirus, all these diseases are zoonotic – they jumped from an animal population into humans. And all are caused by viruses that encode their genetic material in RNA.

That’s no coincidence, scientists say. The zombie-like existence of RNA viruses makes them easy to catch and hard to kill.

Outside a host, viruses are dormant. They have none of the traditional trappings of life: metabolism, motion, the ability to reproduce.

And they can last this way for quite a long time. Recent laboratory research showed that, although SARS-CoV-2 typically degrades in minutes or a few hours outside a host, some particles can remain viable – potentially infectious – on cardboard for up to 24 hours and on plastic and stainless steel for up to three days. In 2014, a virus frozen in permafrost for 30,000 years that scientists retrieved was able to infect an amoeba after being revived in the lab.

When viruses encounter a host, they use proteins on their surfaces to unlock and invade its unsuspecting cells. Then they take control of those cells’ own molecular machinery to produce and assemble the materials needed for more viruses.

“It’s switching between alive and not alive,” said Gary Whittaker, a Cornell University professor of virology. He described a virus as being somewhere “between chemistry and biology.”

Among RNA viruses, coronaviruses – named for the proteins spikes that adorn them like points of a crown – are unique for their size and relative sophistication. They are three times bigger than the pathogens that cause dengue, West Nile and Zika, and capable of producing extra proteins that bolster their success.

“Let’s say dengue has a tool belt with only one hammer,” said Vineet Menachery, a virologist at the University of Texas Medical Branch. This coronavirus has three different hammers, each for a different situation.

Among those tools is a proofreading protein, which allows coronaviruses to fix some errors that happen during the replication process. They can still mutate faster than bacteria, but are less likely to produce offspring so riddled with detrimental mutations that they can’t survive.

Meanwhile, the ability to change helps the germ adapt to new environments, whether it’s a camel’s gut or the airway of a human unknowingly granting it entry with an inadvertent scratch of her nose.

Scientists believe the SARS virus originated as a bat virus that reached humans via civet cats sold in animal markets. This current new virus, which can also be traced back to bats, is thought to have had an intermediate host, possibly an endangered scaly anteater called a pangolin.

“I think nature has been telling us over the course of 20 years that, ‘Hey, coronaviruses that start out in bats can cause pandemics in humans, and we have to think of them as being like influenza, as long term threats,'” said Jeffery Taubenberger, virologist with the National Institute of Allergy and Infectious Diseases.

Funding for research on coronaviruses increased after the SARS outbreak, but in recent years that funding has dried up, Taubenberger said. Such viruses usually simply cause colds and were not considered as important as other viral pathogens, he said.

The search for weapons

Once inside a cell, a virus can make 10,000 copies of itself in a matter of hours. Within a few days, the infected person will carry hundreds of millions of viral particles in every teaspoon of their blood.

Andrew Pekosz, a virologist at Johns Hopkins University, compared viruses to particularly destructive burglars: They break into your home, eat your food and use your furniture, and have 10,000 babies. “And then they leave the place trashed,” he said.

Unfortunately, humans have few defenses against these burglars.

Most antimicrobials work by interfering with the functions of the germs they target. For example, penicillin blocks a molecule used by bacteria to build their cell walls. The drug works against thousands of kinds of bacteria, but because human cells don’t use that protein, we can ingest it without being harmed.

But viruses function through us. With no cellular machinery of their own, they become intertwined with ours. Their proteins are our proteins. Their weaknesses are our weaknesses. Most drugs that might hurt them would hurt us too.

For this reason, antiviral drugs must be extremely targeted and specific, said Stanford virologist Karla Kirkegaard. They tend to target proteins produced by the virus (using our cellular machinery) as part of its replication process. These proteins are unique to their viruses. This means the drugs that fight one disease generally don’t work across multiple ones.

And because viruses evolve so quickly, the few treatments scientists do manage to develop don’t always work for long. This is why scientists must constantly develop new drugs to treat HIV, and why patients take a “cocktail” of antivirals that viruses must mutate multiple times to resist.

SARS-CoV-2 is particularly enigmatic. Though its behavior is different from its cousin SARS, there are no obvious differences in the viruses’ spiky protein “keys” that allow them to invade host cells.

Understanding these proteins could be the key to developing a vaccine, said Alessandro Sette, head of the Center for Infectious Disease at the La Jolla Institute for Immunology. Previous research has shown that the spike proteins on SARS are what trigger the immune system’s protective response. In a paper published this week, Sette found the same is true of SARS-COV2.

This gives scientists reason for optimism, according to Sette. It affirms researchers’ hunch that the spike protein is a good target for vaccines. If people are inoculated with a version of the spike protein, it could teach their immune system to recognize the virus and allow them to respond to the invader more quickly.

“It also says the novel coronavirus is not that novel,” Sette said.

And if SARS-CoV-2 is not so different from its older cousin SARS, then the virus is likely not evolving very fast, giving scientists developing vaccines time to catch up.

In the meantime, Kirkegaard said, the best weapons we have against the coronavirus are public health measures like testing and social distancing and our own immune systems.

Some virologists believe we have one other thing working in our favor: the virus itself.

For all its evil genius and efficient, lethal design, Kirkegaard said, “The virus doesn’t really want to kill us. It’s good for them, good for their population, if you’re walking around being perfectly healthy.”

Evolutionary speaking, experts believe, the ultimate goal of viruses is to be contagious while also gentle on its host – less destructive burglar and more of a considerate house guest.

That’s because highly lethal viruses like SARS and Ebola tend to burn themselves out, leaving no one alive to spread them.

But a germ that’s merely annoying can perpetuate itself indefinitely. One 2014 study found that the virus causing oral herpes has been with the human lineage for 6 million years. “That’s a very successful virus,” Kirkegaard said.

Seen through this lens, the novel coronavirus now killing thousands across the world is still early in its life. It replicates destructively, unaware that there’s a better way to survive.

But bit by bit, over time, its RNA will change. Until one day, not so far in the future, it will be just another one of the handful of common cold coronaviruses that circulate every year, giving us a cough or sniffle, and nothing more. 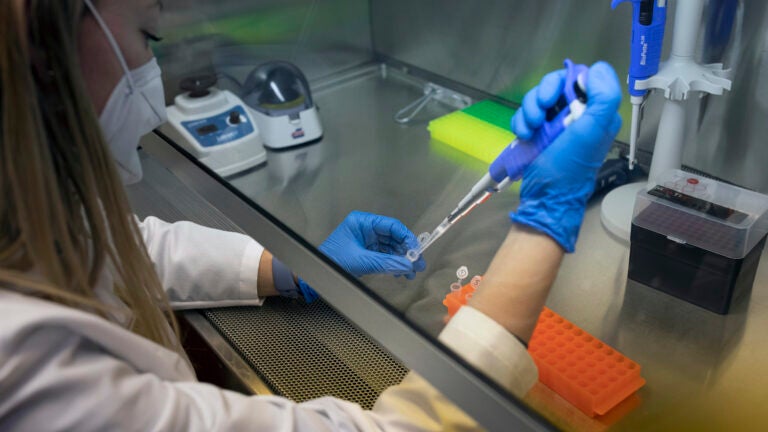