The Patriots’ team plane is making its most important trip of the year before the season even starts.

Thursday afternoon, the Boeing 767 will land at Logan International Airport, carrying 1.2 million N95 masks that will be delivered to health care workers in Massachusetts and New York.

No days off. Thanks to some serious teamwork, Massachusetts is set to receive over 1 million N95 masks for our front-line workers. Huge thanks to the Krafts and several dedicated partners for making this happen. pic.twitter.com/ieV6XMC5Ow

Gov. Charlie Baker and Patriots owner Robert Kraft will be on hand to greet the plane when it arrives at Logan, and the National Guard will transport the supplies to a stockpile in Marlboro.

<h2>Baker thanks Kraft family, China for mass shipment of masks</h2>

In his update Thursday, Baker thanked the Kraft family for their generosity.

“The Krafts were terrific,” he said. “They were a phone call away and immediately went to work on the logistics associated with this and did not stop until they could make it happen. This was a total team effort on every level.”

According to the Wall Street Journal, the quest began two weeks ago, when Baker sealed a deal with Chinese manufacturers for the masks but needed to figure out how to transport them to the U.S.  Kraft and his son, Jonathan, who is the chairman of the board at Massachusetts General Hospital and the Patriots’ president, volunteered the team’s plane, which had to undergo upgrades and improvements in order to make the lengthy international trip. The flight crew needed to obtain visas for travel to China.

After making the necessary upgrades in Wilmington, Ohio, last Friday, the crew moved on to Alaska, only taking mandatory breaks for rest. Maintenance workers and spare parts were included with the flight crew.

In China, crew members were required to remain on the aircraft – to avoid a two-week quarantine – while a ground crew packed the plane, according to the Wall Street Journal. With a maximum of three hours allowed for loading, the masks were ready for departure in 2 hours, 57 minutes, and departed China for Alaska, then Boston, at 3:38 a.m. EST on Wednesday morning.

The original order included 1.7 million N95 masks, but not all of them could be transported in one trip on the plane. The remaining masks are being held securely in China and will be transported shortly on another shipment, according to the Wall Street Journal.

“I’ve never seen so much red tape in so many ways and obstacles that we had to overcome,” Kraft told the Wall Street Journal. “In today’s world, those of us who are fortunate to make a difference have a significant responsibility to do so with all the assets we have available to us.”

The Kraft family contributed $2 million, a sum that covers approximately half the cost of the goods, according to Journal’s report. Robert Kraft told the Wall Street Journal that he was “moved” by the leadership of New York Governor Andrew Cuomo, and pledged to send 300,000 of the masks to the state, with the agreement of Baker. During his press conference Thursday, Baker said masks will also be delivered to Rhode Island.

Baker has continually been outbid by the federal government in his search to deliver more personal protective equipment to the state’s healthcare workers, as the number of cases of COVID-19 continue to rise. More than 1,000 new cases were reported Wednesday, the highest spike so far, to bring the total number of coronavirus cases in Massachusetts to 7,738. There have been 122 deaths from the virus in the state.

On Wednesday, the Kraft family and Gillette Stadium also donated more than $100,000 worth of goods to local food pantries and homeless shelters. 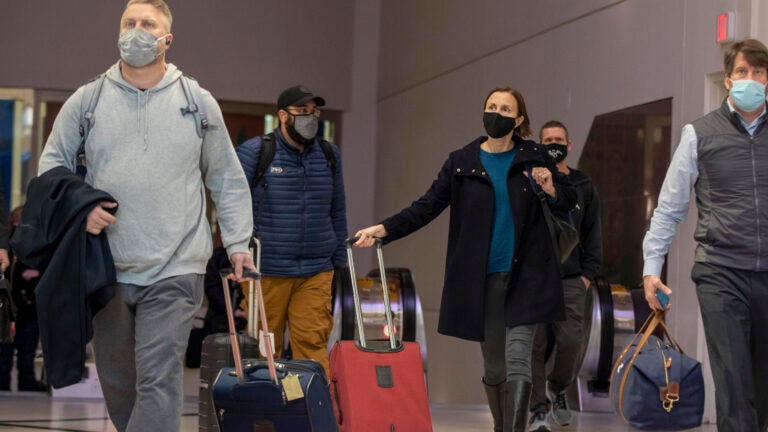 What’s the deal with masks on planes?