The rule of thumb, or rather feet, has been to stand 6 feet apart in public. That’s supposed to be a safe distance if a person nearby is coughing or sneezing and is infected with the novel coronavirus, spreading droplets that may carry virus particles.

And scientists agree that 6 feet is a sensible and useful minimum distance, but some say farther away would be better.

Six feet has never been a magic number that guarantees complete protection. The Centers for Disease Control and Prevention, one of the organizations using that measure, bases its recommendation on the idea that most large droplets that people expel when they cough or sneeze will fall to the ground within 6 feet.

But some scientists, having looked at studies of air flow and being concerned about smaller particles called aerosols, suggest that people consider a number of factors, including their own vulnerability and whether they are outdoors or in an enclosed room, when deciding whether 6 feet is enough distance.

Sneezes, for instance, can launch droplets a lot farther than 6 feet, according to a recent study.

No scientists are suggesting a wholesale change in behavior or proposing that some other length for separation from another human, like 7, or 9 feet, is actually the right one.

“Everything is about probability,” said Dr. Harvey Fineberg, who is the head of the Standing Committee on Emerging Infectious Diseases and 21st Century Health Threats at the National Academies of Sciences, Engineering and Medicine. “Three feet is better than nothing. Six feet is better than 3 feet. At that point, the larger drops have pretty much fallen down. Maybe if you’re out of spitting range, that could be even safer, but 6 feet is a pretty good number.”

One complicating factor is that aerosols, smaller droplets that can be emitted when people are breathing and talking, play some role in spreading the new coronavirus. Studies have shown that aerosols can be created during certain hospital or laboratory procedures like when using nebulizers to help patients inhale medication, which makes such procedures risky for doctors who do them.

If the aerosols that people exhale in other settings are significant in spreading the disease, the 6-foot distance would not be completely protective because those are carried more easily by air currents.

Aerosols are generally considered to be particles under 5 microns in diameter, about the size of a red blood cell, and can be spread in the environment by talking and breathing. But some researchers argue that this is a false dichotomy. Infectious droplets can’t easily be divided into those that are big enough to fall to the ground quickly and those that stay aloft because so much depends on environmental conditions and how deeply they penetrate into the respiratory tract.

“It’s really a continuum,” said Dr. Donald Milton, who studies bioaerosols at the University of Maryland School of Public Health.

Even without the launching power of a sneeze, air currents could carry a flow of aerosol-sized virus particles exhaled by an infected person 20 feet or more away.

“In any confined geometry like an office room, meeting room, department store, food store,” said Eugene Chudnovsky, a physicist at the City University of New York. In a study not yet peer reviewed, he analyzed air flow and showed how “the vortices in the air are taking the virus to different places.”

A preliminary study at the University of Nebraska Medical Center found evidence of coronavirus genetic material on various surfaces in isolation rooms where infected patients were being treated, including on air vents more than 6 feet from the patients. The research, which has not yet been peer reviewed, indicates that the virus can occasionally travel long distances.

“The virus is so small, it can hitch a ride even on tiny, tiny particles,” Fineberg said. “But how important is each size and how well they can transmit disease is not fully understood.”

It is also unclear how many virus particles it takes to start an infection, how long the viral particles remain viable or if studies like the one in Nebraska simply detected the genetic calling card the virus left behind.

Spacing is an effective solution because it also reduces the number of people in a confined space. That reduces the likelihood of an infected person being in the group. And if there is one, fewer other people might be infected.

Dr. Michael Osterholm, director of the Center for Infectious Disease Research and Policy at the University of Minnesota, said the 6-foot distance would clearly “reduce the number of droplets you come in contact with. I have no doubt about that.”

But, he said: “The question is what does it take for you to get infected? And that I think is the trillion-dollar question we have.”

He said, “Maybe all it takes is an aerosol. You don’t need any droplets at all.” If that’s the case, he said, then someone who is at high risk would not want to be in the same room with someone who is infected or might be infected.

Current guidelines already suggest that anyone at high risk should stay home and not be out in public in the first place. And they seem to be working. Places where people reduced travel and started social distancing weeks ago, especially in California, New York and Washington, are starting to show a reduction in the number of new coronavirus cases.

People still need to shop and take care of necessities, Osterholm said, but reducing the risk of exposure to all possible modes of transmission — infected surfaces, droplets and smaller aerosols — is important.

“Your job is to limit it as much as you can.” 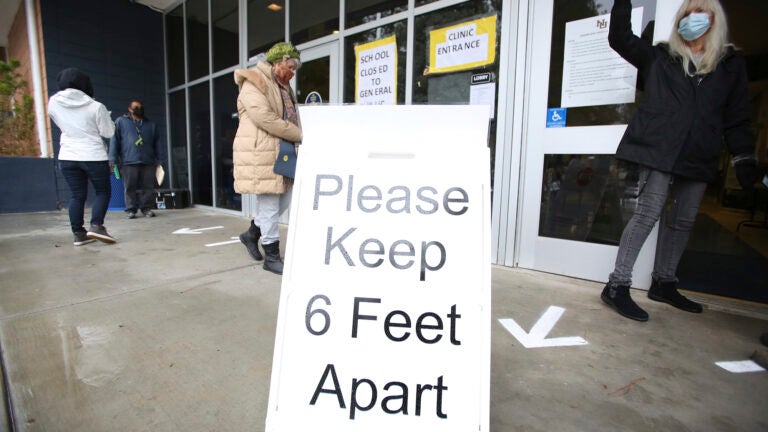