Since boarding the USNS Comfort, joining the global battle against the novel coronavirus, a Navy Reserve combat nurse from New Hampshire has let resilience be her mantra.

“I say oftentimes, my worst day is still better than many people’s best day,” said Capt. Lynne Blankenbeker, who’s served in the military for 34 years. “That’s a perspective you have to keep.”

This motto, along with support from her shipmates and the gratitude of her patients, has guided her through each new day of the pandemic.

Blankenbeker, a Concord, New Hampshire resident, was focusing on a run for Congress before she got a call on March 23 saying she would soon be deployed to New York City, where she would provide medical support in the nation’s epicenter of the COVID-19 pandemic.

“I think that the most important thing that we have to always remember in this nation is we have to put the people first. People come above everything else,” Blankenbeker said. “And being able to put my prior life on pause is exactly what I signed up for.”

Since boarding the Comfort, Blankenbeker has worked in the operating room, where she said she’s treated a variety of people she wasn’t expecting — from a patient who survived 9/11, to people facing chronic illnesses, to patients who are still recovering from gunshot accidents they were involved in years ago.

She said the hospital ship has taken patients as they come, regardless of their COVID-19 status.

“Our ship is called the Comfort, and I love that it’s called the Comfort because I think when we sailed in, there was automatically a sense of relief coming to the people of New York City that we were here to take good care of them. And that’s exactly what we’ve done … so I’m proud to be part of that,” Blankenbeker said.

The USNS Comfort, often called a floating hospital, houses 12 fully equipped operating rooms, a 1,000-person bed capacity, medical laboratories, full-service pharmacies, and blood banks, among other features, according to a release in the U.S. Navy’s blog.

The military ship is the length of three football fields, according to the report, and remains an 894-foot symbol of “medical care and hope during the darkest times.”

Blankenbeker’s days start at 6 a.m. when she leaves her hotel room, gets on a bus that drops her off at the ship, and reviews the surgical procedures scheduled for the day.

Good Morning FB friends and family…..off to work I go! ( and by the traffic, others too!) So glad to see our nation is healing and proud to be a part of helping NYC recover! Have a great day everyone.

While her training left her well prepared for this emergency, she said she wasn’t expecting to be so close to the action.

“This is the first time medical has been at the pointy end of the spear — we’ve actually fought the battle,” Blankenbeker said. “Usually we go out into the field, and we support the war fighter by patching them up and getting [them] either back on the battlefield or back home, but this time we’re actually fighting the fight.”

That piece of it, she said, was a little bit new, “especially when we were trying to fight an invisible enemy.”

But the shared experience and struggle has also brought a strong support system among shipmates.

“This was a new environment for us, and we all rallied together, we supported each other through a time of uncertainty, and America’s healing, we’re seeing it,” Blankenbeker said. “We’re a part of something that’s bigger than ourselves and that’s a good feeling.”

She said technology has played a unique role in building community too.

“Thirty-four years ago, we didn’t have cell phones and Skype,” she said. But now, people will often turn their phones toward shipmates, introducing each other to loved ones. “We’re becoming more of a family I think today than we ever were before,” Blankenbeker said.

And when the care packages arrive, she said everyone’s mood becomes childlike as their spirits lift together.

Things that made me smile today: 1. So many amazing notes and cards from grateful Americans2.Epic delivery of treats…

“Whether it’s a KIND bar, or a granola bar, or a box of chocolate, or just little notes from home, from kids in the community, people telling us that they’re thinking about us,” Blankenbeker said. “That changes everything.”

The last one they received, shipped from Pittsburgh, came with a hand-colored picture of an anchor and a note that read “USN: ultra-cool, super-powerful nurse.”

“USN stands for something different now for me,” Blankenbeker said.

Another care package came from her home base in New Hampshire, where a woman and her son sent a box full of plastic Easter eggs. Blankenbeker said each egg held a handwritten note that she and other shipmates took their time reading.

As the fight continues, the Comfort will soon leave New York City for Norfolk, Virginia, where its crew will restock and ready for another possible assignment, Pentagon spokesman Jonathan Hoffman said at a news conference Friday.

“This is a sure sign of modest progress in mitigating the virus in the nation’s heart of the city,” Hoffman said, “and it is a welcomed sign.”

After treating 182 patients, just one was left on the ship Saturday night.

“One of the great benefits of the Comfort is that it is at sea, and that it’s mobile and we can take it to a port city and set up shop,” Hoffman said. “We’ll look to FEMA as to where it’s gonna go and for guidance on whether there’s that demand signal for us to send it.”

Blankenbeker said she’s not sure when she’ll be going home.

Though of her whole mission, she said she’ll never forget how grateful the people of New York have been.

Every morning I see new life emerging in NYC. Today this deli is open and everyday there is more traffic! While…

It was apparent even on her first day in the city, when a man wearing a mask walked up and asked what branch of the military she served in.

“I said ‘I’m in the United States Navy’ and he said, ‘We love you, New York loves you … We’re so glad you’re here. Thank you so much for coming and taking care of us,” Blankenbeker recalled.

“We all have a why — why do we do what we do. And that was my why,” she said. “Why am I here? I’m here to take care of people who are enormously grateful for the care we’re giving.” 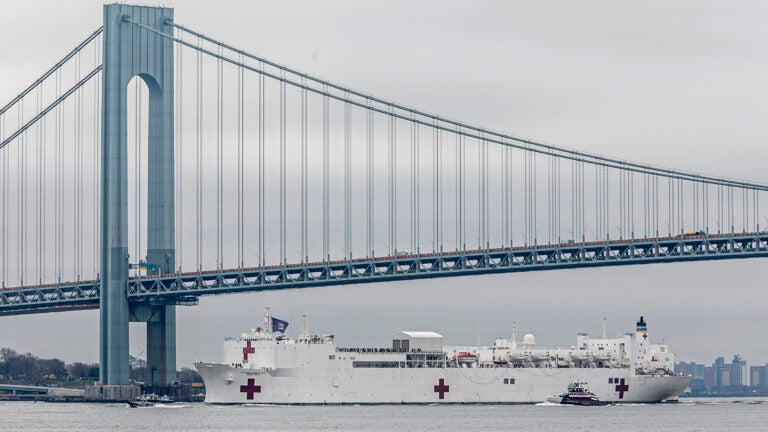