Americans are angry. The country erupted into the worst civil unrest in decades after the death of George Floyd, and anger about police violence and the country’s legacy of racism is still running high. At the same time, we’re dealing with anger provoked by the coronavirus pandemic: anger at public officials because they’ve shut down parts of society, or anger because they aren’t doing enough to curb the virus. Anger about being required to wear a mask, or anger toward people who refuse to wear a mask. Anger with anyone who doesn’t see things the “right” way.

“We’re living, in effect, in a big anger incubator,” said Raymond Novaco, a psychology professor at the University of California at Irvine, who has expertise in anger assessment and treatment.

According to psychiatrist Joshua Morganstein, the country is now dealing with “three disasters superimposed on top of one another”: the pandemic, the economic fallout and civil unrest. “Certainly, one way of responding, and a common way of responding, is anger,” said Morganstein, who chairs the American Psychiatric Association’s Committee on the Psychiatric Dimensions of Disaster.

Surveys over the past few years suggested that anger had risen in the country even before the 2020 crises. A Gallup poll conducted in 2018, for example, concluded that Americans’ stress, worry and anger had intensified that year. Twenty-two percent of Americans had felt anger the previous day, up from 17 percent the previous year.

The emergency weekly surveys conducted since April by the Census Bureau and Centers for Disease Control and Prevention don’t ask specifically about anger. But they reveal that many Americans are anxious or depressed — especially black and Asian Americans in the week following George Floyd’s death. Both anxiety and depression can manifest as anger.

Anger is also an understandable reaction to the uncertainty inherent in the pandemic and protests, said Larissa Tiedens, a social psychologist and president of Scripps College in California. “We know that uncertainty as both as a cognitive and emotional state is one that people want to resolve,” she said. Anger is one way to do that. “By being angry about something,” she said,” you get to leave your feelings of uncertainty for a while and occupy a space and a sensibility of certainty and clarity and confidence.”

Although some anger is inevitable, it becomes a problem “when it is sustained or there are recurrent/repetitive bouts of it without use of other positive coping tools,” Damon Tweedy, an associate professor of psychiatry and behavioral sciences at Duke University’s School of Medicine, wrote in an email. Unmanaged anger can erupt into aggressive behavior against others, which is of particular concern now; domestic violence cases have spiked during the pandemic, and experts believe children at home with abusive parents are in increased danger. Anger can also harm our own health by affecting the cardiovascular, neurological and endocrine systems.

Here are strategies to curb anger before it gets to that point.

Insulate yourself from anger

“The most important lesson concerning anger control is not to get angry in the first place,” said Novaco. He suggests three “antidotes” to help prevent anger from taking hold: appreciation, affiliation and aspiration.

Appreciation means paying attention not to what angers you but to things that contribute to positivity in your life. Affiliation means nurturing our relationships. Aspiration means striving to accomplish things that are bigger than yourself or that serve other people. By employing these antidotes, he said, “we’re doing things that insulate us from getting angry about stuff.”

Another way to insulate yourself from anger is though “basic self-care,” said Morganstein: getting enough sleep, hydration, and nutritious food and exercise, and not using alcohol, tobacco or other substances to cope. He acknowledges that this is hardly earth-shattering advice. “There’s nothing exciting or headline-grabbing frankly about self-care,” he said. “The things that are at the root of our wellness tend to be relatively humdrum.”

But they can be protective. To illustrate the importance of nutrition, for example, Brad Bushman, a professor in Ohio State University’s School of Communication and an aggression and violence researcher, cites research that found that married people who had less glucose in their blood stabbed voodoo dolls representing their spouse more times than those who had more glucose in their blood. “We need our brains to help us combat anger, because that takes a lot of cognitive effort,” Bushman said. “And so, we need to feed our brain healthy foods so that it can combat anger.”

We also need to be aware of what we’re feeding our minds. “We all have to be very cautious with our exposures to the media,” Morganstein said. “There is so much stimulation and so much information. And much of it is not good news.” Studies have suggested a link between viewing television after natural disasters or terrorist events and post-traumatic stress symptoms.

“We really could all stand more media breaks, more time walking outside, seeing our neighbors, saying hello, exchanging problem-solving and reminding each other that we’re in this together,” Morganstein said. (At a loss for words if a neighbor confides in you? “You can say to somebody, ‘I don’t know what to say right now but I’m glad you’re sharing it,’ ” he counseled.)

Speaking by phone, Tweedy advised setting limits on and being intentional about your media consumption. For example, you could set a timer to watch TV or scroll through Twitter for 15 minutes, once or twice a day. Otherwise, “you could go down a rabbit hole of being on these things for hours without a purpose in mind,” he said. And often you wind up feeling worse than when you started.

To control your anger, Novaco said, “you’ve got to recognize that it’s happening.” That means “self-monitoring”: being attuned to the physical feelings — a flushed face, a racing heart or tight muscles, perhaps — that indicate anger is approaching.

When we sense those feelings, Tweedy said, we shouldn’t try to suppress or deny them. “I think it’s important for people, when you talk about anxiety or anger, to sort of acknowledge that it’s there. ‘Oh yes, I’m anxious right now, and that’s okay,’ ” he said. He suggests allowing yourself to feel that way for a short period of time, and then moving on to either address your anger in a constructive way or engage in self-care.

If you feel an impulse coming on to do something antagonistic, Novaco said, “you’ve got to think, ‘Wait a minute, is this a good idea? What are the consequences of this? How is this helpful?’ “

As Novaco points out, Americans’ threat perception might be off-kilter at this moment in time, given the virus and the unrest in the country. We might need to remind ourselves, he said, that we have “a problem here that needs to be solved, not a threat that calls for an attack.”

Bushman said that another reframing strategy that works is to adopt a fly-on-the-wall perspective: “Look at things from a third-person perspective rather than being immersed in the situation.”

Deal with that heightened energy

Addressing our anger involves both physiological and cognitive components, according to Bushman. “Physiologically, you want to reduce the arousal state to get rid of the anger,” he said, through taking deep breaths or listening to calming music, or counting to 10 — or, following Thomas Jefferson’s counsel, 100.

What you shouldn’t do, Bushman added, is vent. “When you hit, kick, swear, scream, shout, punch a pillow, punch a punching bag,” he said, “what you’re doing is keeping the arousal levels high.”

You can also address the cognitive aspect of anger. “Angry people tend to ruminate about what made them angry,” Bushman said. “They just mull it over and over in their minds, and that just makes things worse. So, if you can, distract yourself.” Try doing something that is “incompatible with anger and aggression,” he suggests. This could be petting a puppy, hugging or kissing a loved one, or helping somebody in need.

Helping someone has the added benefit of giving you a sense of control. “One of the things that can feel very overwhelming and paralyzing for people is to sit in a passive mode,” said Morganstein, especially when absorbing news or social media. Helping another person reminds us that “we are not helpless, we are not powerless, and there are things we can do to effect change.”

As several of these experts pointed out, anger isn’t necessarily a bad thing. “Most people call it a negative emotion, but … virtually every movement in history has been fueled by anger because angry people want to do something about their current situation,” Bushman said.

In contrast to other emotions such as depression and anxiety, Novaco said, anger can be a powerful positive force. “Anger doesn’t stop you. The important thing, though, is to use it in a way that has a positive result.”

Tiedens says she sees that happening with students across the country who, rather than wallowing in anger, are engaging in activism. “I think that is a great way of dealing with anger,” she said.

Finally, remember that your children are watching how you are dealing with anger. “I think it’s important to be open about these sorts of things,” Tweedy said. “Because kids are going to feel emotions as well and have to learn how to deal with it as well.”

Morganstein agreed. “If we are feeling really angry,” he said, “showing our children and helping explain to them why we’re doing what we’re doing can be an amazing opportunity to model something.” 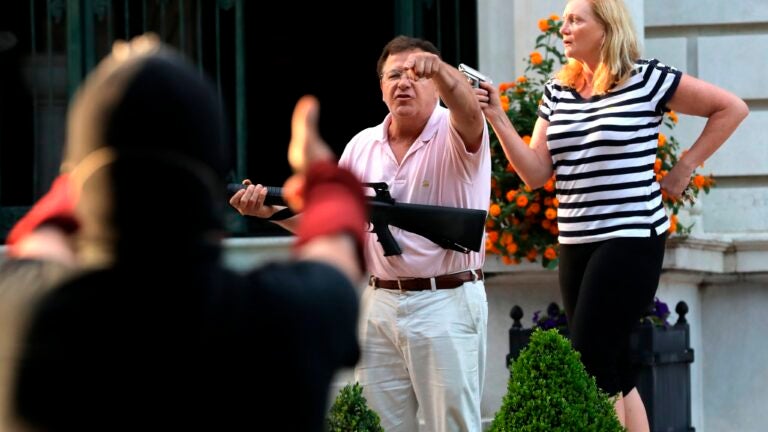