State officials are urging the public to take proper precautions when outdoors after the mosquito-borne Eastern Equine Encephalitis virus was detected in mosquitoes sampled in two Massachusetts communities in the past week, signaling the start of what is expected to be another active year for EEE cases, they say.

The state Department of Public Health announced Friday the rare virus, known as EEE, was detected in a mosquito sample collected on July 1 in Orange. On Monday, the department said another batch of samples collected on July 5 in Wendell also contained EEE.

While no human or animal cases of EEE have been detected so far this season, officials have placed Wendell, New Salem, and Orange — all in Franklin County — and Athol in Worcester County at moderate risk for the virus.

State leaders said Tuesday the test results are the first signs of the virus locally in 2020, after Massachusetts experienced its most intense EEE outbreak last year — during which 12 human cases were reported and six people died — since the 1950s.

“This is considered quite early for EEE,” Public Health Commissioner Dr. Monica Bharel said during a press conference. “In fact, July 1 is the earliest that EEE has been found in mosquitoes in the last 20 years.”

The potentially fatal infection reemerged last year in the commonwealth for the first time since 2012.

The illness, which has no cure, triggers brain swelling, fever, and coma, and kills approximately a third of the people who contract it. Those who survive are often left with severe neurological disabilities and complications.

Last year, EEE was also found in nine animals — eight horses and a goat — and put 35 communities at critical risk, while 53 and 121 others hit high and moderate risk warnings, respectively, at the outbreak’s peak.

In May, state epidemiologist Dr. Catherine Brown told Boston.com the state’s mosquito larvae population appeared “relatively robust” and other signs indicated the commonwealth should expect another busy summer for EEE.

State officials say agencies have been monitoring and working to reduce Massachusetts’s mosquito populations since the end of last year’s outbreak.

“EEE is very real,” Gov. Charlie Baker said Tuesday, speaking at the Plymouth County Mosquito Control Project facilities. “It’s very dangerous, and the work that’s done by many of the control districts around the commonwealth, including this one, makes an enormous difference in keeping people healthy and safe during the course of the summer.”

In April and May, crews conducted aerial and hand spraying, and officials are now awaiting the results of field trials conducted by regional mosquito control districts that will illuminate how effective those efforts were, Theoharides said.

This year, the state will accelerate the schedule of mosquitoes collected for virus testing and thereby testing results, she said. Trucks with mounted mosquito control spray systems began making their rounds in June and will continue to do so into the first week of September as officials collect and analyze data, according to Theoharides.

“We are stepping up our surveillance this season and stepping up the accuracy and rapidity with which we provide that information, so that, again, we can use a data-driven approach to address this public health issue,” Bharel said.

Baker and others say a key piece of the approach for this year’s mosquito season includes measures laid out in a bill the Baker Administration filed in April that seeks to allow DPH to work with the State Reclamation and Mosquito Control Board, which oversees 11 regional programs, to coordinate a unified, statewide response.

The governor said that while many cities and towns have access to mosquito control equipment through their membership in a control district, there are parts of the state that do not benefit from participating in such a program. In those areas, there are no agencies that “can engage in what we would call the typical, traditional mosquito control activities,” Baker said.

A two- to three-year EEE outbreak requires a different approach, he said.

“The simplest way I can describe this is to say that most of the places that have mosquito control districts in Massachusetts are the places where historically we’ve seen EEE outbreaks,” the governor said. “One of the reasons we believe it’s important to create a more statewide approach to this is because over the course of the past several years, and last year especially for the first time, we saw outbreaks in parts of Massachusetts we’ve never seen before.”

Baker said that happened primarily due to the changing migratory patterns of the birds that infect mosquitoes with the virus. Orange is one of the communities where officials observed the change and where there is no mosquito control program, he said.

Baker said he is hopeful his bill will be able to become law soon. The state Senate approved the proposal last month.

“It’s important we think a little more about this as a statewide issue,” he said.

According to Bharel, the state is stepping up its public outreach program to educate the public about EEE, including through mass.gov/mosquitoesandticks.

People should take personal precautions when going outdoors, such as using mosquito repellants with an Environmental Protection Agency-registered active ingredient, wearing long-sleeved clothing, and being aware of mosquito activity in a particular area, Bharel said.

Both Bharel and Baker acknowledged they want people to continue to be able to enjoy the outdoors, safely, especially after the coronavirus pandemic kept the region hunkered down in recent months.

“We’ve all been spending a lot of time indoors related to COVID-19, and we want the residents of Massachusetts to go outside and enjoy outdoor time with families,” Bharel said. “But just like we asked you to take precautions against the other virus that causes COVID, we ask you to take enhanced precautions against EEE so that we can protect ourselves and continue to enjoy the outdoors.” 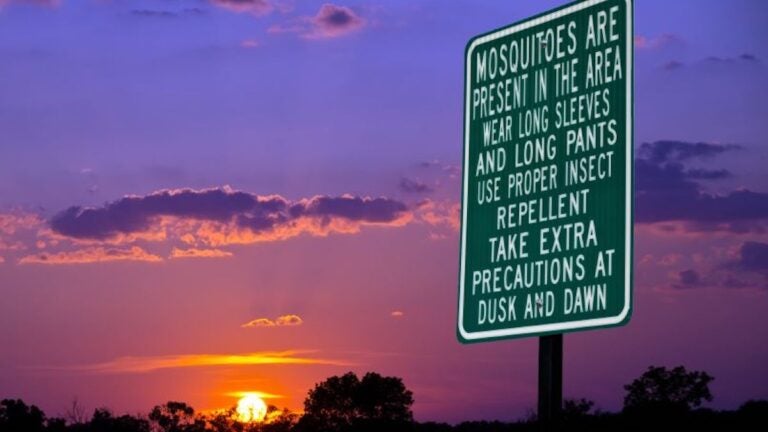 Massachusetts’ EEE-carrying mosquito population appears to be ‘robust.’ Here’s what that means for this summer.