During those challenging weeks, the second year internal medicine resident witnessed how the coronavirus disproportionately affected communities of color. That experience alone — coping with what she called a “stark, obvious example of racism” in the nation and its health care system — was jarring, AbdelHameid told Boston.com.

Then George Floyd was killed in Minneapolis, the video of his death and the ensuing protests igniting a national discussion around addressing racism and police violence against Black people.

Up until this year, AbdelHameid said she has tried to keep her personal feelings and her identity as a Black woman separate from her work in medicine. But the events of 2020 brought her to what she felt was a “breaking point” where she felt she had to use her voice.

“I love my job and it’s always been such a reprieve for me from dealing with the outside world,” she told Boston.com. “You come here and you do your job and you love it and you help people, and it feels like you’re somehow able to move the needle and make things a little better. Even if outside the hospital walls things aren’t that way. But it got to a point where you can’t really say, this is outside the hospital and this is inside the hospital. It all kind of merged together.”

That’s what prompted her to write an essay titled “Professionalism 101 for Black Physicians,” which was published in the New England Journal of Medicine on July 14.

AbdelHameid went on to describe her experience in a series of situations in the hospital, sharing how she felt in those moments as she maintained her professional composure.

In one instance, she writes of her feelings when armed security officers arrived in the room of an agitated, delirious patient, who was white. The patient, she wrote, pleaded with the officers to help him as hospital staff worked to restrain him.

“After reassuring him that he was safe, I asked the patient what I could do for him; he asked me to say a prayer, which I did,” she wrote. “I left his room stunned: this white man saw the police as a symbol of hope, help, and safety, whereas all I felt was fear. How unfair it was that I could never look at an officer and feel anything else.”

Being “professional,” AbdelHameid wrote, means often having to suppress “my rage, my tears.”

“Professionalism is showing up to work a long-call shift after spending my day off crying over the slaughter of George Floyd, my sadness exacerbated by the approaching birthdays of my father and brother, Black men who might have no more birthdays to celebrate if they happen to be stopped one day by the wrong cop,” she wrote. “Professionalism is refraining from discussing race at work for fear of being labeled an ‘angry Black woman.’”

It also means not saying anything when she’s called a nurse, or when she’s told she’s a “well-spoken Black person” or “not really Black Black,” she wrote.

“Professionalism is silencing these feelings, smiling at work, wiping my tears in the bathroom after reading about George Floyd and then returning to rounds, nodding passively when a white colleague says it’s insane that a cop killed a man on video yet was not charged,” her essay reads. “My professionalism is exhausting, back-breaking.”

“If only professionalism were as simple as wearing a button-down shirt, rather than wearing forced smiles to cover the layers of sadness I feel.” — Duaa AbdelHameid, MD @DAbdelHameid

AbdelHameid told Boston.com that discussing her own identity and race in relation to her job is new for her, since she’s tried to keep the two things separate.

“I reached a point where I felt like I had to speak up,” AbdelHameid said in an interview about the essay.

The Brigham doctor wrote the piece in one sitting, feeling she had to do something with the emotions and frustration she had been holding back. She submitted it to the journal the same night.

“I was like, you know what, I spend more hours at work than I do at home, than I do with my family, so in a sense this is my family and if I’m upset and if I want to talk about something, and if I think something needs to be discussed, if I need to vent about it to cope with it, it shouldn’t be something that I have to keep quiet,” she said.

AbdelHameid said she doesn’t expect her essay to prompt major change, but she is hopeful that it will raise some awareness and more understanding about the discussions that need to continue around racism and its presence in health care.

“People might think that it’s not an issue that affects people that I work with and people that I’m friends with in the hospital,” the internal medicine doctor said. “But I want them to be aware that there’s a significant amount of trauma with seeing these kinds of things happen to people who look like you and feeling unable to do anything about it, and then having to go about your life in a completely different circle of privilege and ignore it. It’s traumatic.”

So far the responses she’s gotten from colleagues and strangers alike has been overwhelmingly positive and supportive, she said.

AbdelHameid emphasized that the point of the essay wasn’t to share her sadness, but to raise the question of what is being done within medicine to address and discuss racism.

“That’s what I wanted people to take away from it,” she said. “We’re not immune to any of this. It happens here, it happens to people that you work with. And experiences can be so different between people in the same program, in the same year, that work on the same team, just based on the fact that one is Black or that one is a woman or that one is both.

“And I just wanted us to be more aware of that so that everyone can start stepping up,” she said. “Because I think the desire to do that is in there. I believe most people are inherently good, especially at the Brigham. It’s a place full of wonderful, kind people. So that desire is there. Sometimes I just think it requires a little bit of awakening, so I wanted to discuss the intersection of those two things in hopes that it will help bring up some of those conversations.”

Read her full essay at the New England Journal of Medicine. 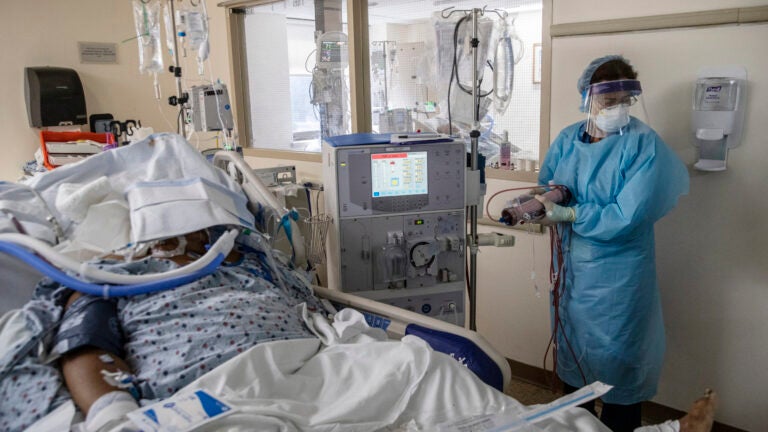 Black Americans are most likely to know a COVID-19 victim, poll finds