The drop comes in the wake of last year’s outbreak of vaping-related illnesses and deaths.

Just under 20% of high school students and 5% of middle school students said they were recent users of electronic cigarettes and other vaping products, the national survey shows. It was conducted between mid-January and mid-March.

The Centers for Disease Control and Prevention conducts the national survey of more than 20,000 middle and high school students. It asks students if they had used any vaping or traditional tobacco products in the previous month.

While cigarette smoking has been trending down, vaping use exploded in recent years. The increase was attributed to popular newer versions of e-cigarettes, like those by Juul Labs Inc. of San Francisco.

The Food and Drug Administration earlier this year barred flavors from small vaping devices like Juul and others that are mainly used by minors. And federal law now bans sales of all tobacco products and e-cigarettes to anyone under 21.

Public health experts have wondered if last year’s outbreak would deter people from vaping. The bulk of the cases occurred in August and September. By year’s end, more than 2,600 illnesses and close to 60 deaths were reported.

Most of those who got sick said they vaped solutions containing THC, the ingredient that produces a high in marijuana. CDC officials gradually focused their investigation on black market THC cartridges, and on a chemical compound called vitamin E acetate that had been added to illicit THC vaping liquids.

Matt Myers of the Campaign for Tobacco Free Kids said in a statement the survey showed a “meaningful drop” in teen vaping. But he criticized the Trump administration for not following through on a pledge to ban all flavored e-cigarettes.

The policy did not apply to disposable e-cigarettes, which saw a big bump among teens in this year’s survey.

“As long as any flavored e-cigarettes are left on the market, kids will get their hands on them and we will not solve this crisis,” Myers said. 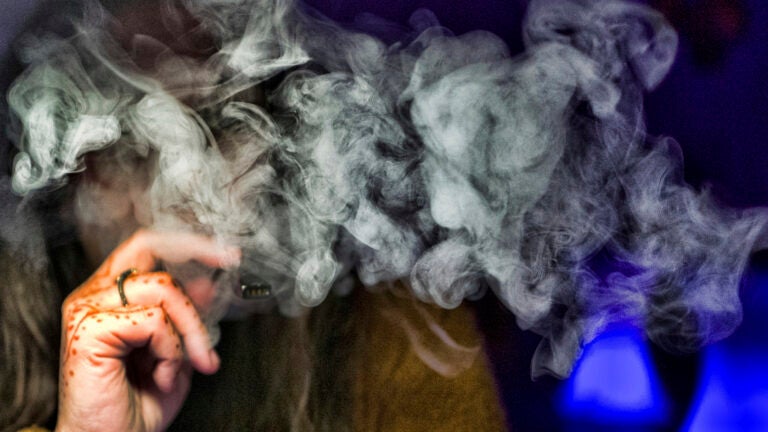