For every 100 calories we might expect to burn as a result of working out, most of us will actually net fewer than 72 calories burned, according to an eye-opening new study of how physical activity affects our metabolisms.

The study finds that our bodies tend to automatically compensate for at least a quarter of the calories we expend during exercise, undermining our best efforts to drop pounds by working out. The results also show that carrying extra pounds unfortunately compounds calorie compensation, making weight loss through exercise even more elusive for those who are already overweight.

But the study suggests, too, that calorie compensation varies from person to person, and that learning how your metabolism responds to workouts may be key to optimizing exercise for weight control.

In theory — or in a kindlier, alternative universe — exercise would aid substantially in weight loss. When we move, our muscles contract, requiring more fuel than at rest, while other organs and biological systems likewise expend extra energy. Thanks to past laboratory studies, we know approximately how much energy these processes demand. Walking a mile, for instance, burns approximately 100 calories, depending on someone’s body size and walking speed.

Until recently, most people, including exercise scientists, assumed that this process would be additive — that is, stroll a single mile, burn 100 calories. Stroll two, burn 200, and so on, in logical, mathematical fashion. If we do not then replace those calories with extra food, we should wind up burning more calories than we consume that day and start dropping pounds.

But that rational outcome rarely happens. In study after study, most people who begin a new exercise program lose less weight than would be expected based on the number of calories they burn during their workouts, even if they strictly monitor their diets.

So, some scientists began speculating that energy expenditure might be less elastic than we had thought. In other words, it might have limits. That possibility gained traction in 2012, with the publication of an influential study of African hunter-gatherers. It showed that, although the tribespeople regularly walked or jogged for hours, they burned about the same number of total daily calories as relatively sedentary Western men and women. Somehow, the study’s authors realized, the active tribespeople’s bodies were compensating, dialing back overall calorie burning, so that they avoided starvation as they stalked their food.

Other small studies since have reinforced the finding that more activity does not necessarily result in greater daily calorie expenditure. But few large-scale experiments have tried to pin down just how much our bodies compensate for the calories burned while moving, since measuring metabolic activity in people is complex and expensive.

As part of an ambitious new scientific initiative, however, dozens of researchers recently pooled their metabolic data from multiple studies involving thousands of men and women. These studies involved drinking doubly labeled water, the gold standard in metabolic research. It contains isotopes that allow researchers precisely to track how many calories someone burns throughout the day.

For the new study, which was published in August in Current Biology, some of the scientists involved in the initiative set out to see what happens to our metabolisms when we move. They pulled data for 1,754 adults that included their doubly labeled water results, as well as measures of their body compositions and basal energy expenditure, which is how many calories they burn simply by being alive, even if they otherwise are inactive. Subtracting basal numbers from total energy expenditure gave the researchers an approximation of people’s energy expenditure from exercise and other movement, such as standing, walking and general fidgeting.

Then, using statistical models, the researchers could tally whether calories burned during activity increased people’s daily energy expenditure as expected — that is, whether people burn commensurately more total daily calories when they move more. But, the researchers found, they did not tend to burn more calories. In fact, most people seemed to be burning only about 72% as many additional calories, on average, as would be expected, given their activity levels.

“People appear to be energy compensating for additional calories burned through activity by at least a quarter,” said Lewis Halsey, a professor of life and health sciences at the University of Roehampton in London and one of the lead authors of the new study.

Unexpectedly, the researchers also found that energy compensation levels increased among people with relatively high levels of body fat. They tended to compensate for 50% or more of the calories they burned by being active.

It is important to point out that the study did not look at people’s food intake. It concentrated solely on energy outlay and how our bodies seem able to offset some of the calories burned during exercise by reducing biological activity elsewhere in the body. Just how we unconsciously orchestrate this feat, though, and which internal systems could be most affected remain unclear, Halsey said. He and his colleagues speculate that immune system operations, which require considerable energy, may get dialed down somewhat. Or we could unknowingly fidget less or otherwise grow more sedentary overall, on days we exercise. Perhaps, too, some of the inner workings of our cells may slow, reducing our bodies’ overall energy expenditure.

But the new science of exercise and calorie compensation is not completely discouraging. Even people whose bodies compensate for 50% or more of the calories they expend during physical activity will burn more calories per day than if they remain still, Halsey pointed out. A more intractable problem with using exercise for weight loss, he continued, is that exercise realistically burns few calories, period. To drop pounds, we also will have to eat less.

“Half a cookie or half a can of cola” after a half-hour walk, and you will have taken in more calories than you burned, he said, however much or little you compensate. 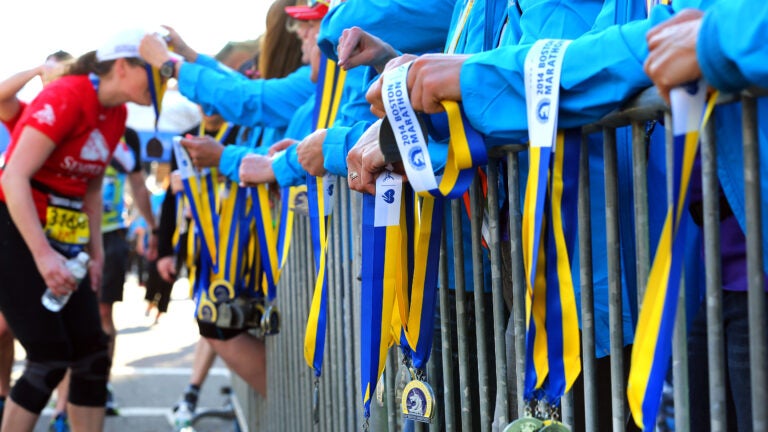 Here are the best ways to recover from running the Boston Marathon, according to local health experts