Local doctors are concerned about increasing cases of a common respiratory illness largely affecting children. Though COVID-19 precautions nearly eradicated it last winter, in its typical season, it’s come back with a vengeance since masking and distancing have laxed.

Respiratory Syncytial Virus, or RSV, is a remarkably common virus — nearly every child catches it before the age of two — it just doesn’t impact everyone the same way. As we’ve learned on a mass level with COVID-19, RSV tends to cause severe illness in more vulnerable groups, like newborns and premature or immunodeficient infants, and just a common cold in others.

Physicians across the Commonwealth have reported a weird year of RSV, with low cases in the winter season and a burst in the summer. One big reason: small children haven’t had the chance to build up any immunity.

Boston.com heard from two Boston healthcare practitioners about how severe RSV shows up, how it’s treated, and why doctors are concerned about the increasing rates of a common illness.

How RSV shows up in children

RSV is a common respiratory virus that often shows up as a mild cold, but can lead to pneumonia or bronchiolitis in vulnerable populations, according to the Centers for Disease Control and Prevention. Unlike with COVID-19, an adult who catches RSV from a child will often develop a mild cold, and is not at risk of serious illness.

Dr. Eileen Costello, chief of ambulatory pediatrics at Boston Medical Center, sees a “ton” of RSV, and said symptoms typically start with a runny nose and cough, get worse three to five days in, and most begin recovering after seven to ten days. RSV, like COVID-19, is diagnosed with a nasal swab. Dr. Ben Nelson, MassGeneral pediatric pulmonologist who works with RSV patients in many settings, said most don’t even know they have RSV because doctors don’t test for it unless they’re seriously ill.

“Symptoms range from fever, cough, and runny nose, all the way to respiratory failure,” Nelson said. ‘The vast majority of patients only develop mild symptoms.”

Children with a higher risk of severe illness from RSV typically receive a monoclonal antibody treatment called SYNAGIS, Costello said, which is a series of five monthly injections during the RSV season. RSV’s early onset this year meant BMC started administering antibody treatment in the spring instead of the fall or winter.

A child is typically hospitalized if they aren’t able to take in enough oxygen or nutrition, Costello said, and will most commonly be placed on oxygen and IV fluids, with intermittent fluids suctioning and humidification. In rare cases, a child could be placed on a ventilator to help the lungs heal.

How COVID-19 impacted RSV spread & why doctors are concerned

The height of RSV season, like the flu, is November through March or April, but the past year has been distinctly different.

“Each year, we see patients require hospitalization due to the virus,” Nelson said. “However, this year is quite different — we are seeing more children with RSV right now than usual…and they are more severely affected. It is extremely rare to see this much RSV right now.”

Data collected by the Centers for Disease Control and Prevention show how RSV’s typical pattern was disrupted by COVID-19 quarantine precautions. RSV cases and testing spiked in the fall and early winter of 2019-2020 and decreased in the summer, but, unlike usual, cases never increased in the fall and winter months. Though testing increased — as physicians knew to look out for the virus — cases did not, and instead began climbing steeply in May 2021 and into the summer months.

“We believe the mitigation strategies we used to prevent COVID, also prevented RSV and flu,” Costello said. “As soon as we started relaxing the mask wearing and kids started gingerly going back to daycare, we started seeing RSV in the spring and summer, which is when we don’t usually see it. That’s an interesting epidemiological fact.”

Most children exposed to RSV build up a natural immunity over time, Nelson said, and that plus low circulating levels mean there isn’t much RSV spread this time of year. But with people quarantining, and schools and daycares closed, there’s much less natural immunity now.

“Now, with daycare centers and schools opening back up, and children spending more time around one another, they are starting to spread these viruses among themselves again, and given the low levels of natural immunity due to lack of exposure over the last year, these children are now being exposed to these viruses for the first time and becoming quite ill,” Nelson said. “That is why we are seeing an increase in the number of children infected with RSV.  In fact, I am worried that we will see many viruses come back with a vengeance this fall and winter for similar reasons.”

Though she didn’t have hospital data available, Costello guessed BMC was managing more RSV hospitalizations, and said she’d had a few this year.

“It is worrying to me, because I think we’re going to see more of it…almost every child in the world gets this virus between zero and age two, and so many kids in that age group were home and not interacting with each other…that the whole cohort of kids that didn’t get it last year are going to get it this year, and the zero to one-year-olds, so I think the numbers are going to be very high,” she said. “Whether they’ll be more severe, I just don’t have the answer to that yet, nobody does.”

Costello and Nelson urged families to protect themselves and their children, as well as others, by getting the flu shot, washing their hands, and taking standard public health precautions when a child is sick.

“I really believe in mask-wearing, we have learned so much about how much safer the world can be, especially now with COVID and young children who can’t be vaccinated,” Costello said. “To me, it just makes so much sense that kids capable of wearing masks should wear masks.” 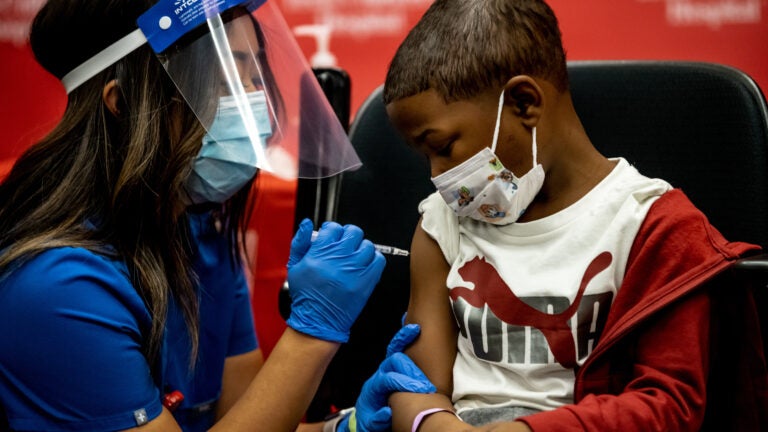