Pollen may seem like it’s everywhere right now. From coatings on cars, to the wall of pollen that blew through last week, pollen is plaguing allergy sufferers across the state, experts say.

“It’s been horrendous,” Dr. Caroline Sokol, a board-certified allergist and attending physician in Massachusetts General Hospital’s Allergy and Clinical Immunology Unit, told Boston.com. “It’s been a really tough season for my patients and for me.”

“Allergy seasons in the last several years have been progressively more severe,” Dr. John Costa, the medical director of the Brigham and Women’s Hospital’s Allergy and Clinical Immunology Practice, told Boston.com. “This is related to research showing that global climate change has allowed for increased plant biomass. So the plants are springing up and blooming earlier.

‘”You’re getting a larger number of plants that are growing throughout the growing season,” Costa said. “They live later into the fall. And on a per-plant basis they’re producing more pollen.”

A 2021 study published in Proceedings of the National Academy of Science found that across North America, pollen seasons have gotten about 20 days longer in the last 30 years. And Boston is no exception, Sokol said.

She said the longer pollen season is seen mostly across the northern part of the United States, in regions that used to see longer and colder winters, which shortened allergy season.

“I always tell my patients around here to start their allergy meds around St. Patrick’s Day around here … but anytime you have a warm spring or a warmer than normal winter, that allergy season can start a little bit earlier,” Sokol said.

On a shorter-term scale, looking at the last few weeks, Sokol said the lack of rain is contributing to allergy symptoms.

“We’ve just had a lot of pollen in the air and unfortunately, we haven’t had a lot of rain to kind of take it down,” Sokol said. “So we’ve just been stuck with this pollen that’s just coating everything, being blown around by the wind, and we’re all feeling the effects of it.”

Right now is especially tough for many allergy patients, Costa said, because we are at the overlap of allergy seasons, so more allergens are in the air than normal.

“The picture of the last week or two is that we’re at the nexus of two different pollen seasons. We’re at the end of the tree season, and the beginning of the grass season,” Costa said.

According to the Weather Channel, in Boston levels of tree pollen are high, and both grass and ragweed pollen are in the moderate category on Tuesday.

Beyond just the allergic

Though increased pollen counts certainly affect allergy sufferers, they aren’t the only victims — people without allergies can also be irritated by pollen in the air, leading to some overlapping symptoms.

This is because, like many substances, pollen grains are an irritant, and can leave anybody coughing and sneezing, the doctors said.

“The analogy I like to use with patients is, if I throw sand in your eye, are you going to tell me you’re allergic to it?” Costa said. “Pollens are little particles, they have mass, so when you sweep the garage floor and you put up a plume of dirt and that gets in your eyes and your nose and inside your throat will it make you choke and cough. When there’s enough of a density of pollen, even non-allergic people will feel it based on a particle effect.”

A lot of the pollen you actually see on a day-to-day basis isn’t the root cause of allergies for many people, both doctors said. One of the pollens responsible for coating cars and windows and creating pollen clouds is pine pollen, a particularly heavy and large pollen that is not a super common allergen.

“Here in New England we have a lot of pine trees. And pine, as it turns out, is a very heavy pollen so it doesn’t stay airborne the way the other tree and grass pollens do, but it sure falls down and makes a nice blanket and you can really see it well,” Costa said.

How to fight back

For counteracting the particle effects of pollen, the masks that have become commonplace through the pandemic can be of some help. The same way that when working in a woodshop people wear masks to prevent inhalation of wood particles, people can wear masks to provide some level of protection, Costa said.

Masks can also, to some degree, help lessen exposure to allergens, which is key to managing allergy symptoms, Sokol said. There are a number of things people can do to help lessen their allergies.

“If you do go out for a run, shower immediately when you come back in, just try and wash those pollens off,” Sokol said. “You can use things like sinus rinses, like neti pots, to try to flush out kind of your nasal passages, which especially can be helpful for some people at the end of the day or after being outside.”

Unfortunately, Sokol said, if you want to enjoy the outdoors, there is only so much you can do to prevent exposure. But there are other methods of allergy relief readily available.

Both Sokol and Costa recommended over-the-counter antihistamines, which work by blocking the chemical (histamine) released by the immune system that causes allergy symptoms, according to Mayo Clinic. Common antihistamines include Zyrtec and Allegra.

Beyond antihistamines, Costa recommended eye drops like Zaditor and Pataday, that can help alleviate itchy eyes.

Both doctors also mentioned over-the-counter steroid nasal sprays, which work by shutting off some of the immune system expression that leads to allergy symptoms.

“An important medication that not everybody thinks to take are the nasal sprays, the steroid nasal sprays, and there are a ton out there and they’re all over the counter now. These are incredibly effective against allergy symptoms,” Sokol said.

There are also prescription medication and other treatments that people can ask their doctors about, Sokol said.

The end of itchy eyes and runny noses may be approaching for some allergy patients, even if only temporarily.

The forecasted rain for part of the rest of the week may help wash pollen out of the air and off surfaces, Sokol said.

“If pollen is just sitting around, unless you pick it up with your finger and put it in your eyes, it’s not really going to bother you,” Sokol said. “It really bothers people when it’s in the air when it’s being blown around. So anything that takes that out of the air is going to be helpful.” 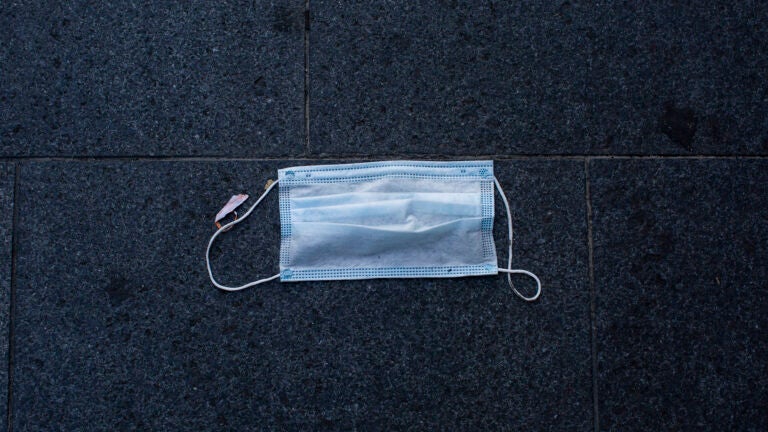 Monkeypox can be airborne, too