As the nation awaits an impending decision from the Supreme Court of the United States regarding abortion access, a few advocacy groups in Massachusetts are continuing the fight to protect access in a potential post-Roe overturning world.

The groups in question, Reproductive Equity Now, the American Civil Liberties Union of Massachusetts, and the Planned Parenthood Advocacy Fund of Massachusetts, founded the Beyond Roe Coalition, which is committed to protecting and expanding access to reproductive health care in the commonwealth.

Here is what they are trying to do.

The coalition, which is open for others to join, created a set of recommended legislative action, budget investments, and regulatory solutions that has been sent to lawmakers and policy makers in the state.

“It’s really a roadmap for legislation and for executive action. It’s our path to really re-envision what true reproductive equity can and should look like in the commonwealth,” Rebecca Hart Holder, the executive director of Reproductive Equity Now, told Boston.com. “And as with our response with the Roe Act, it is our moment to take bold meaningful action.”

The Roe Act, which was passed in late 2020 and expanded access and protection of abortion services in the state, was another joint effort between the three founding organizations, though at the time they were known as the Roe Act Coalition.

“When Justice Alito leaked, or somebody leaked, draft opinion that would overturn Roe in such a really dramatic way, we gathered again … and we agreed that we needed to form a new group,” Carol Rose, the executive director of the ACLU of MA, said. “So we created the Beyond Roe Coalition in response to the leak and in preparation for what we see as a lot of states are going to be criminalizing access to abortion care and a lot of patients needing to get greater access and a lot of providers needing to be protected.”

Though the Roe Act does protect abortion rights in Massachusetts, which is more than many states have in place, it doesn’t go so far as to ensure people actually have access to reproductive health care.

“There are still a lot of people who don’t have full access to reproductive health care. It’s not just abortion, but it’s also things like emergency contraception, birth control itself,” Rose said. “So we want to make sure that people aren’t prevented from getting access to health care here in Massachusetts.”

The coalition’s recommendations fall into three main categories: expanding access to care, supporting patients and providers, and increasing education and research. Planned Parenthood Advocacy League of Massachusetts’s executive director, Nate Horwitz-Willis, said the coalition is positioning itself to be “solutions oriented in the face of the Dobbs decision.”

“Access is meaningless if we don’t have providers who can offer care,” Hart Holder said. “We need to be supporting those providers because the commonwealth believes that abortion is legal care that should be protected here. Making sure that providers can safely provide lawful care in the commonwealth is critically important.”

The coalition lays out ways lawmakers can help increase access, including creating support funds in the state budget, mandating insurance coverage for abortion, and simplifying access to emergency contraception.

Increased access is also fundamentally linked to supporting patients and providers, the second bucket of recommendations, coalition leaders said. One of the challenging legal questions the coalition is exploring is how telemedicine and abortion restrictions interact, Rose said.

“I do think the most interesting thing to focus on is how do we protect providers who might provide telemedicine to somebody in another state. So if I’m a provider in Massachusetts, and I get on the phone, and I talk somebody through an abortion in Texas, … what do you do? That’s the part of the law that is yet to be determined,” Rose said.

It is more straightforward when people actually travel to Massachusetts for care, though not without some concerns, Rose said. If the Supreme Court does strike down Roe v. Wade, at least 22 states are poised to restrict abortion access, according to the Guttmacher Institute. Hart Holder expects Massachusetts, and other states that still have access, will see an influx of people looking for care.

“If you have family in Massachusetts, if you can fly here, if you have friends here, you are going to come to the place where you can get a direct flight, where you have supports, whether that’s friends or family, and where you feel safe accessing abortion care, and that means Massachusetts is going to be a destination for care,” Hart Holder said.

There is some concern that other states may try to extend their laws into the commonwealth, which is another reason provider protections are needed, Rose said.

The third prong of the coalition’s approach is education and research, which they break down into data collection, provider trainings, sexual health education, and a public health campaign.

“The third element is to really increase education and research efforts so that people understand what their rights are, and why reproductive health care, defined broadly, is so important to basic equality for women and men alike,” Rose said.

The coalition hopes to be a representative group that centers voices of traditionally vulnerable and underserved communities, Rose said.

To get involved, coalition leaders said people can co-sign the agenda on their website or reach out to the member organizations for more information.

“We need to make sure that people get involved. That’s going to be the biggest key for the coalition,” Horwitz-Willis said.

The day the Supreme Court hands down a decision on the Dobbs vs. Jackson Women’s Health Organization case, which will likely be before July 4, Rose, Hart Holder, and Horwitz-Willis all said nothing will really change for the coalition. The leak of the majority opinion in May lit a fire under the organizations, Hart Holder said, but the work won’t change if the court acts as expected.

“I don’t think it affects the coalition at all. I think it is incredibly unlikely that, at a minimum, the Mississippi law isn’t upheld and that overturns Roe, so the landscape of abortion access in the United States is about to dramatically change and that means we keep fighting here in Massachusetts,” Hart Holder said.

There may be a vigil or gathering the night of the decision for people to come together and raise their voices, Rose said.

“We know the opposition has had 50 years to strategize to get to this point. And for us in Massachusetts, we always want to let people know that our law is strong and is here, it’s not going away at all,” Horwitz-Willis said. “We just want to make sure that we get that word out, we’re protecting and we’re being as proactive as possible.” 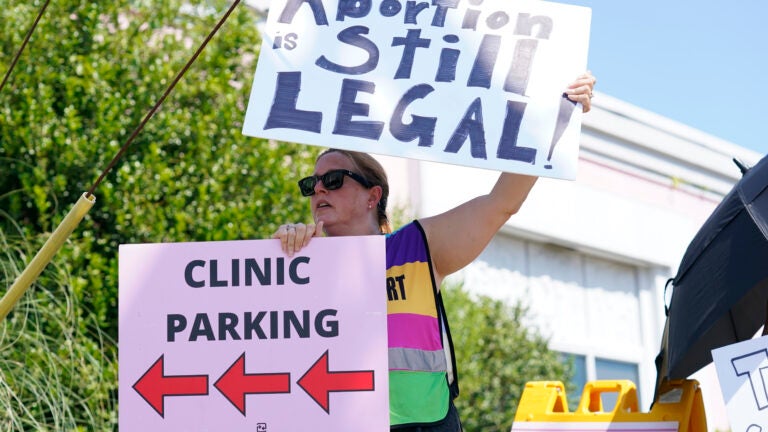 After Roe, Dems seek probe of tech's use of personal data