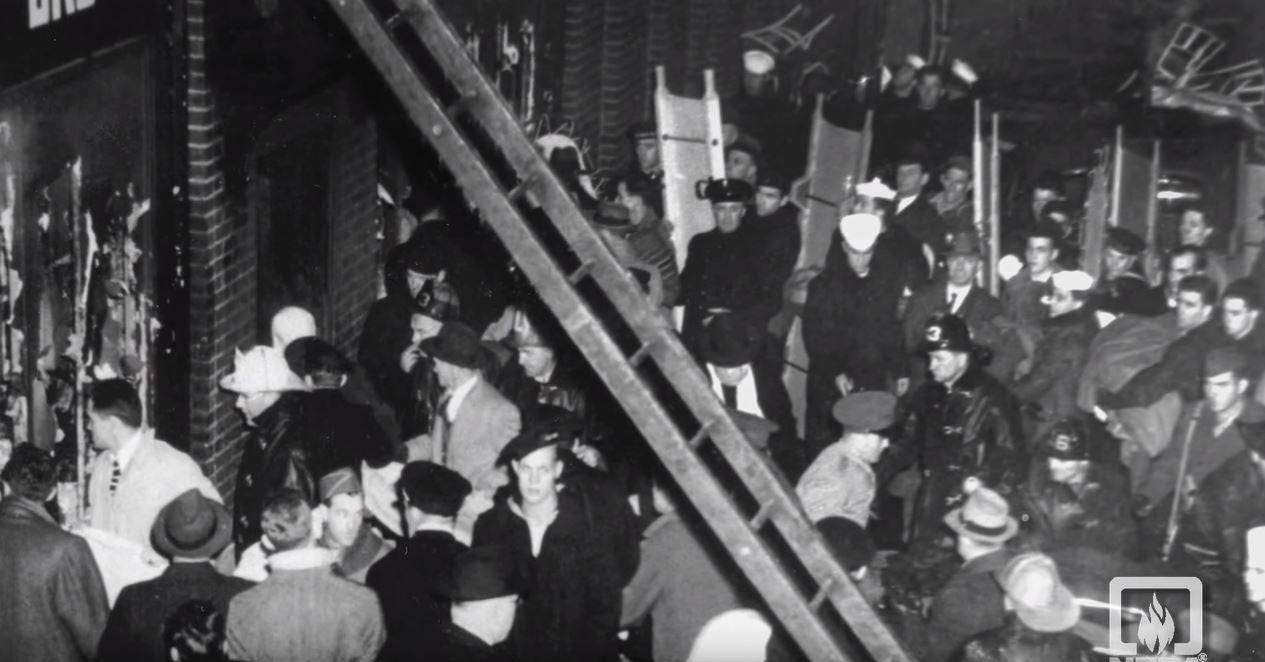 On the Saturday following 1942’s Thanksgiving, Boston was buzzing with socialites and those looking for a space in one of the city’s most desirable dance halls. Boston College had just faced off against rival College of the Holy Cross in a highly anticipated football game, and crowds of people in the city flocked to theaters and nightclubs — including more than 1,000 who packed into one of the South End’s popular clubs, Cocoanut Grove.

Cocoanut Grove set up extra tables to seat the growing number of people as it began to exceed its official capacity of about 600, a 1943 report from the National Fire Protection Association stated. The dance floor teemed with couples and all of the chairs were claimed, witnesses said, as patrons weaved their way through thick crowds among artificial palm trees, leather walls, and ceilings covered in cloth.

Then, before many even saw the beginning sparks, the nightclub was engulfed in flames. 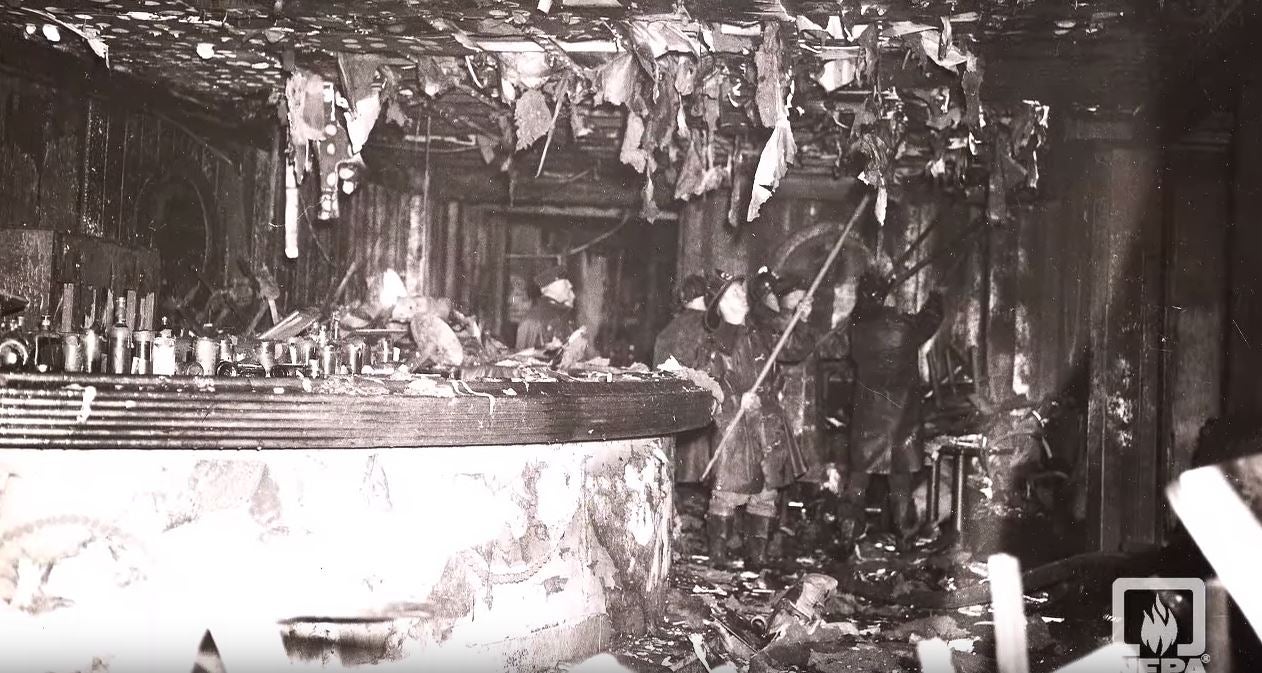 On November 28, 73 years ago, Cocoanut Grove nightclub caught fire in the worst nightclub tragedy in U.S. history, which killed 492 and injured 166 others. Theories on what started the fire range from faulty electrical wiring installed by an unlicensed electricican to a 16-year-old bus boy misusing a match.

Survivors and authorities have long disputed the source, but witnesses agree that the flames began in the Melody Lounge, a cocktail lounge in the club’s basement, and quickly spread through the building with the help of flammable decorations, cloth-covered ceilings, and cocoanut palms, according to the NFPA.

As patrons ran to escape, they found many exits blocked by the flames while others were barred or locked, according to multiple accounts written by The Boston Globe in the days and weeks following the tragedy. Some became trapped in the club’s revolving doors, while others likely died before getting up from their tables after breathing in smoke and fumes.

“The unprecedented speed with which unconsciousness overtook everyone inhaling the fumes easily explains the deep piles of victims that plugged exits and covered whole sections of the floors of the three main rooms,’’ a physician told the Globe. “They never had a chance. They never knew what happened.’’

Before Cocoanut Grove could sound an alarm, police had responded to a vehicle fire yards from the club. As officials were working to stop that fire, they heard cries of help coming from the nightclub and responded. Even in close proximity to the fire, authorities couldn’t act fast enough to save everyone.

Inside, staff and patrons struggled to stay conscious and escape. Anthony Marra, a 15-year-old bus boy who was working in the club that night, testified of the horrors he saw while the owner of Cocoanut Grove was on trial following the incident, the Globe reported.

“I saw smoke coming up, so I went down the ladder and ran down to the kitchen,’’ he said. “I saw everybody yelling for their husbands and wives. I stood in front of a fan so I could breathe all right. The place was full of smoke. Then the electricity died down.’’ 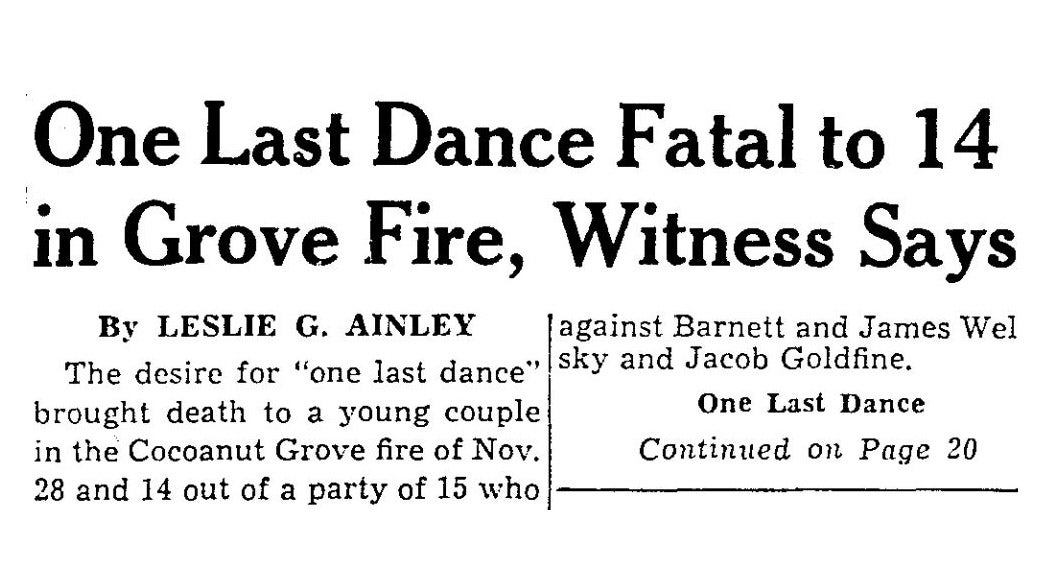 Some broke windows and escaped, while others reported that they were trampled in the struggle. Witnesses testified in trial that they saw a woman with her hair on fire, according to the Globe.

“I saw an ice cream box there, so I took the cover off and stuck my head in,’’ Marra said. “I thought, ‘I can’t die here.’ So I crawled over some pipes and out a cellar window.’’

The day after the fire, authorities marked the deathtoll at 399, the Globe reported. It was already the worst disaster in Boston history, and would go on to claim nearly 100 more lives. At least one victim jumped to his death from a Massachusetts General Hospital window in the months after the fire, and others later succumbed to their injuries.

The following May, eight victims were still hospitalized and more were receiving outpatient care, the Globe reported. 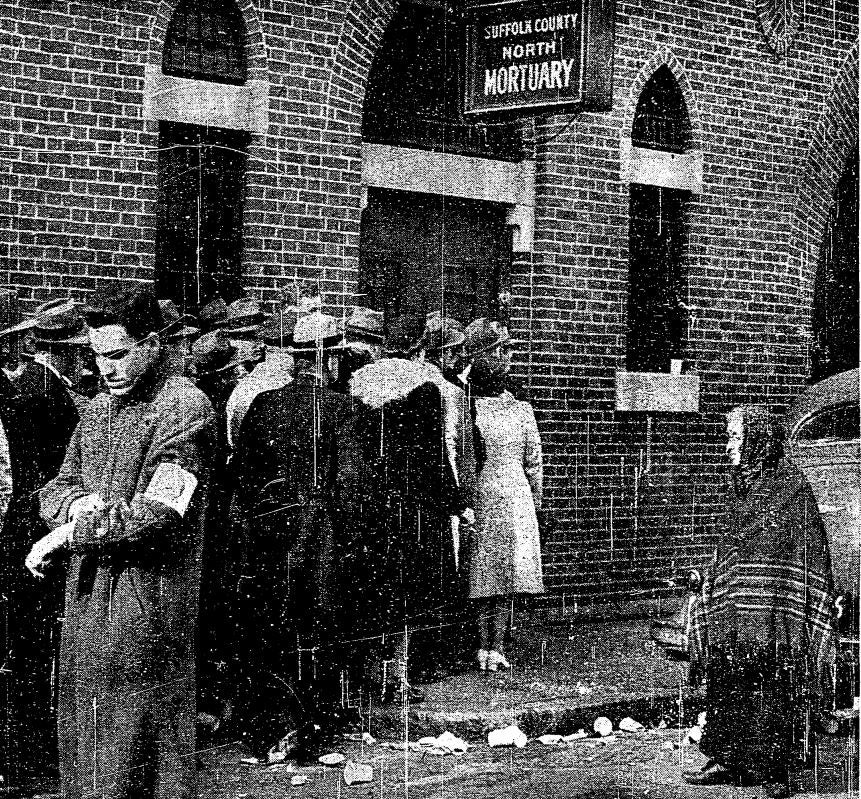 A crowd gathered outside the mortuary in the days after the fire.

The tragedy had immediate repercussions, with legislators filing bills just 24 hours after the fire demanding investigations and to strengthen building, fire prevention, and safety inspection laws, the Globe reported. Nationally, the topic of fire safety and prevention came to the forefront, with other communities across the country considering ways to prevent a similar tragedy.

“What happened in Boston could happen anywhere, given a similar combination of material facts,’’ The Washington Post wrote of the fire.

A month after the fire, 10 were charged in the tragedy, including the Boston Building commissioner, the club’s owner and manager, the contractor who built the club, and a building inspector, the Globe reported. The owner, Barnett Welansky, was later sentenced to serve 12 to 15 years in prison for 19 counts of manslaughter and conspiracy to violate building laws.

“The sight of the ruins was so horrorful as to suggest that it was diabolically designed to lure people into blind alleys, blacked passage ways, with doors locked, the place jammed just so that the click of the cash register would be heard,’’ Robert Bushnell, the attorney who prosecuted Welansky, said. “It was maintained as a fire trap.’’ 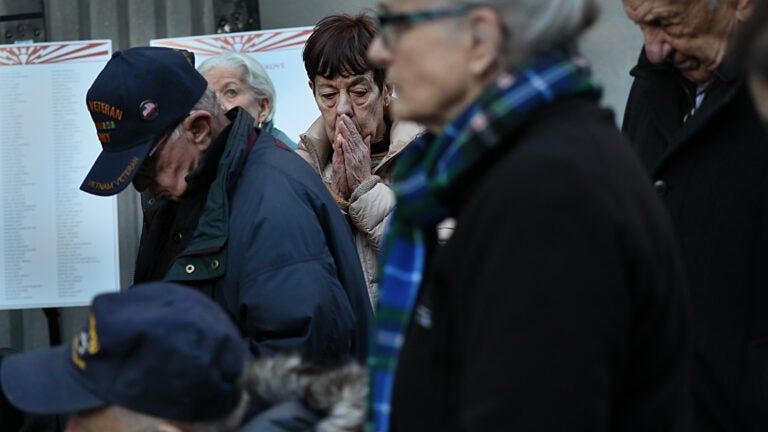 After the 80th anniversary of the tragic fire, a Cocoanut Grove memorial is coming to Boston