Maybe you spotted it while snacking on some potato chips by the pool, or it caught your eye while you were driving down the Mass. Pike. But the iconic red, white and black lighthouse that adorns countless bags of Cape Cod Potato Chips — and some Massachusetts license plates — really exists, and you can find it overlooking the water in Eastham.

Now more than a hundred years old, Nauset Light was saved from tumbling into the ocean 21 years ago. You can climb its historic stairs and tour the 48-foot tall building for free. Here’s the story behind the stately old beacon.

Before there was one, there were three 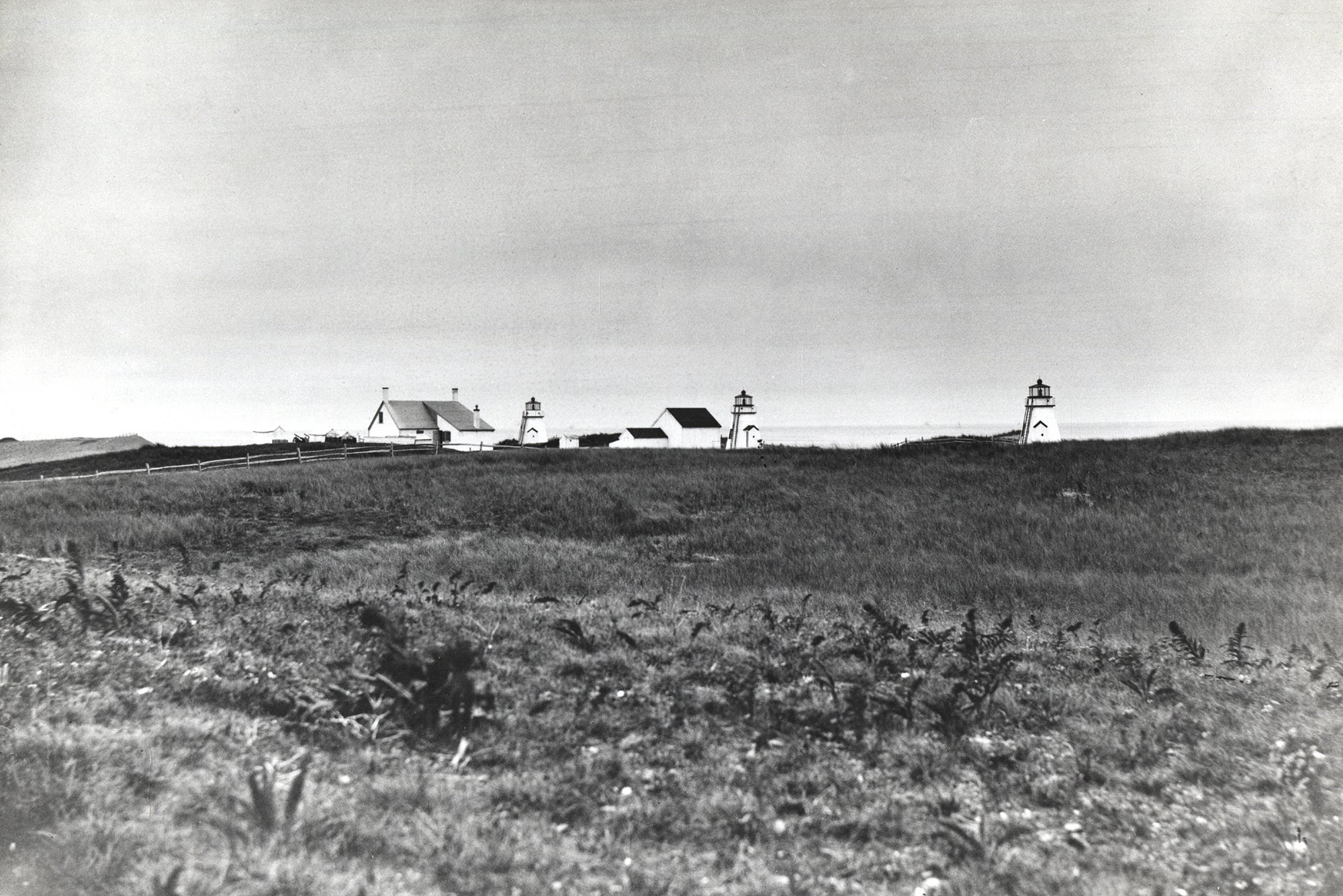 The original Three Sisters, before 1875.

Long before Nauset Light became an Instagrammable, picture-perfect destination, there were the Three Sisters.

Just 15 feet tall each, the three brick lighthouses stood about 150 feet apart and comprised the Nauset Beach Light Station, according to Christine Ebert, a member of the board of directors for the Nauset Light Preservation Society. Though lighthouses already stood watch in Truro and Chatham, there were so many shipwrecks that the Three Sisters were erected in 1838 to help guide disoriented mariners off the coast.

“The story goes, from sea if you looked on shore, it looked like three ladies in white dresses and black hats,” Ebert said.

Wooden towers replaced the brick ones in 1892. 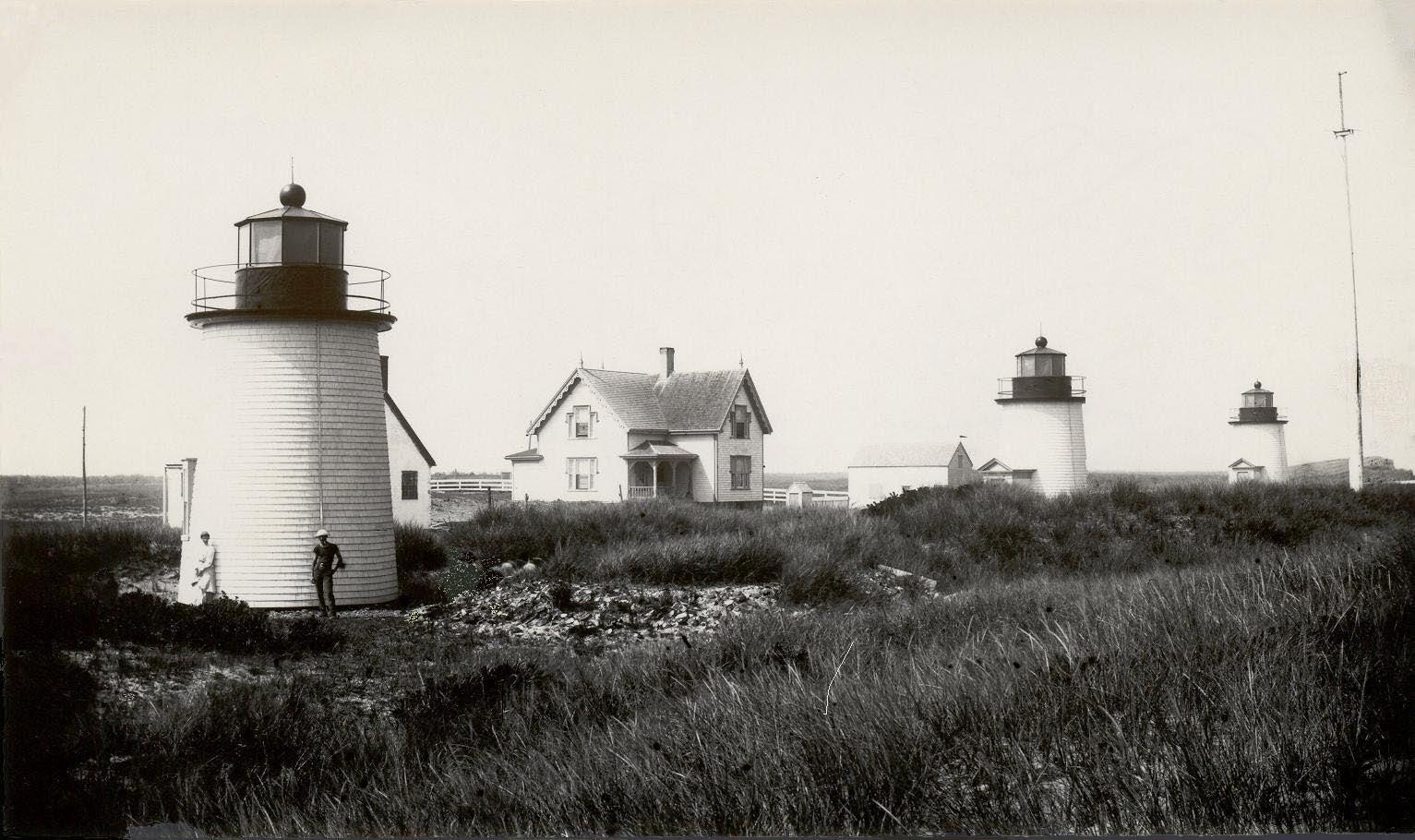 The wooden Three Sisters, circa 1892.

Two of the sisters were made redundant and eventually auctioned off when a Fresnel lens, which could flash three times every 10 seconds, was installed in the central tower. That lighthouse became known as “the beacon.”

In 1877, the lighthouses in Chatham were replaced with two cast iron, brick-lined towers. One of them, which was later moved to Eastham in 1923, became the present-day Nauset Light. In 1940, it was painted its distinctive red-and-white blocks of color, thanks to a suggestion from local fishermen.

“They had said, ‘You know the lighthouse would be easier to see in the daytime if it had the top part red,’” Ebert said.

All three of the sister towers were eventually obtained by the National Park Service, which reunited the small lighthouses in their original formation, not far inland from Nauset Light.

Saved from the ocean 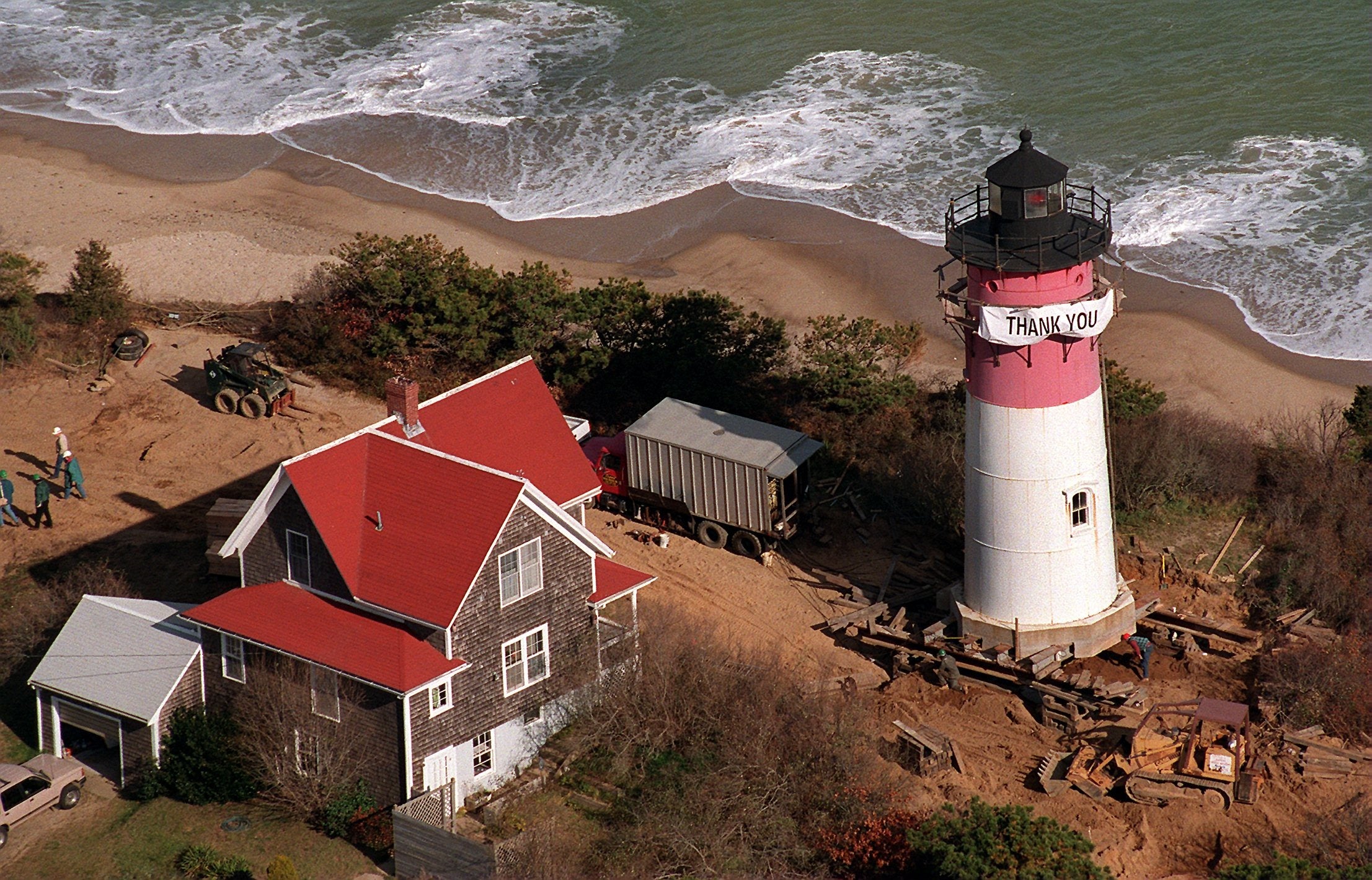 When Nauset Light was moved to Eastham, it was placed about 200 feet from the edge of the beach’s cliff. By 1993, because of beach erosion, it stood about 50 feet from the precipice. Ebert said the Coast Guard, which owned and maintained the lighthouse, didn’t have the funds to move it away from the edge and planned to dissemble it. 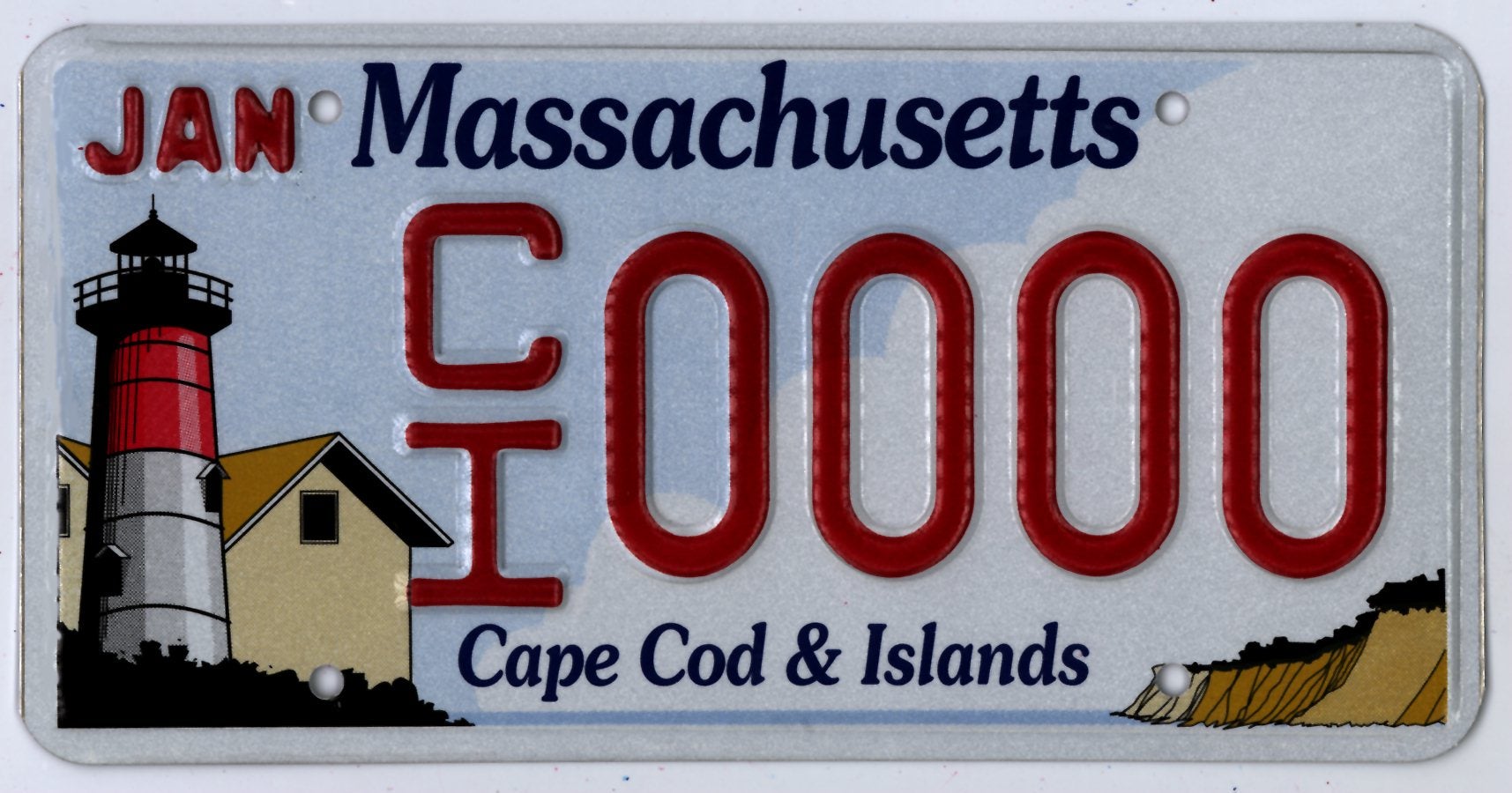 Concerned members of the community formed the Nauset Light Preservation Society and raised funds to supplement a federal grant to cover the $330,000 cost of moving the tower.

Nauset Light was moved back 360 feet in 1996, a process that took 11 hours. The lighthouse keeper’s house, which was built in 1875, and an oil house built in 1892 that was used for storing the fuel used to light the tower were also moved.

The Coast Guard transferred ownership of Nauset Light to the National Park Service, which established a partnership agreement with the preservation society to maintain and operate the light as a private aid to navigation.

From historic beacon to potato-chip fame 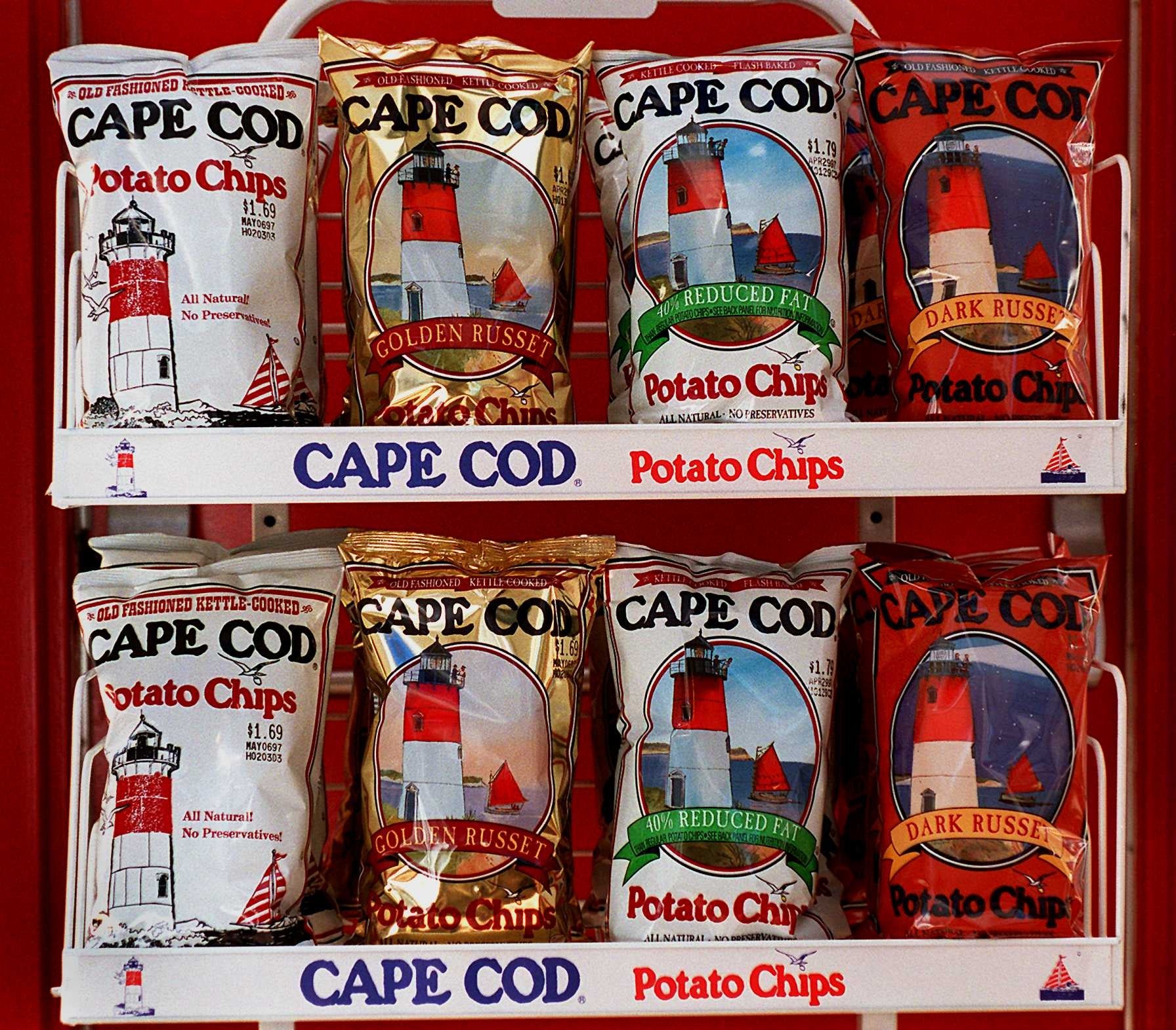 The original design, on the far left, beside the images of Nauset Light painted by Elizabeth Mumford in the early-90s.

The Cape Cod Potato Chips company was founded on July 4, 1980, and sold five years later to Anheuser-Busch. Its original owners, Stephen and Lynn Bernard, bought back the chip company in 1996 to rescue it from closure. According to The Boston Globe, Bernard and his daughter, Nicole, then turned their attention to reintroducing the snacks with new bags and new art.

They asked local artist Elizabeth Mumford, who lives in Hyannisport, to create an oil painting that included a lighthouse and a boat, since the company already had that image combination copyrighted for their bags. 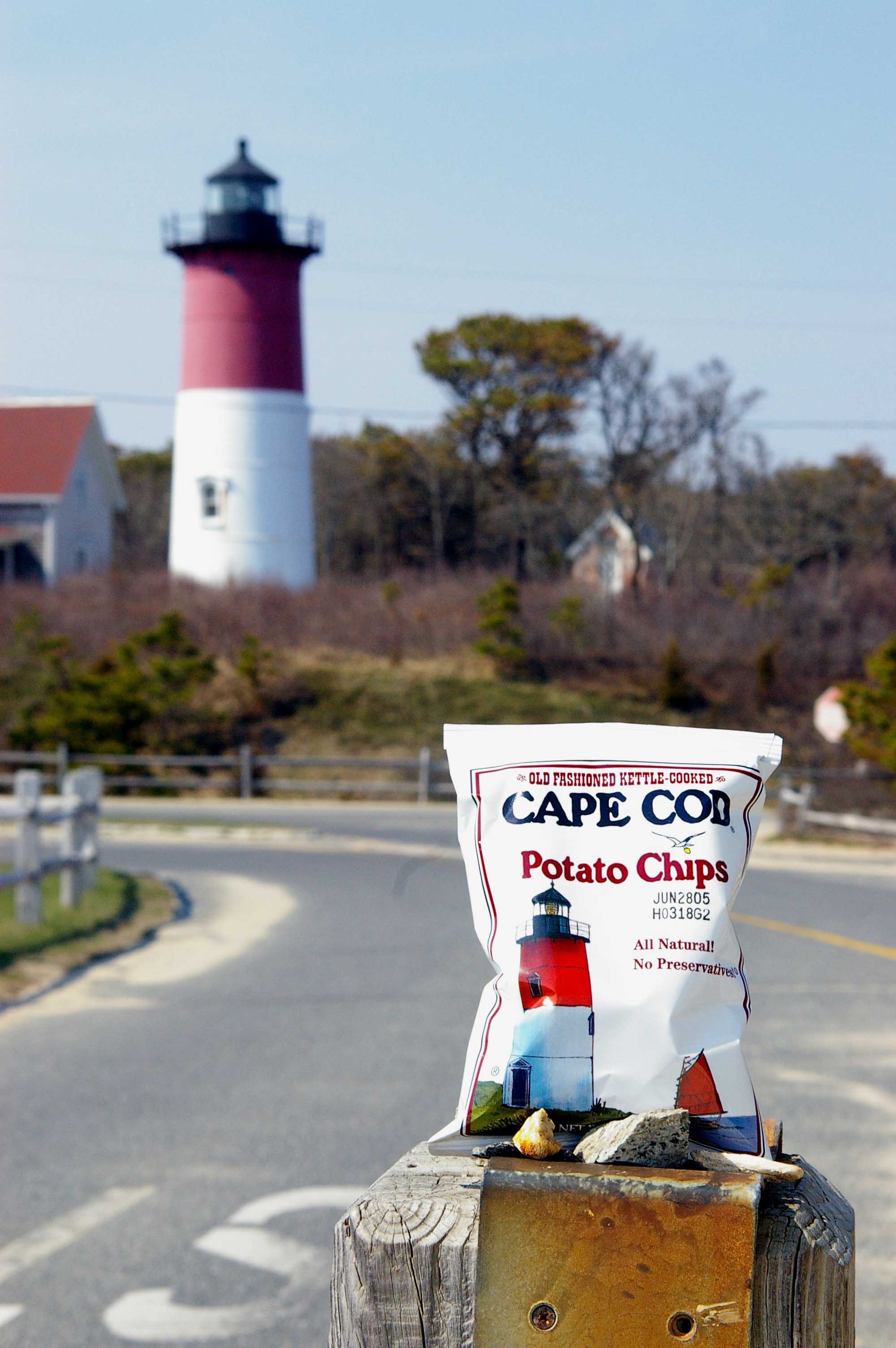 A bag of the chips with Mumford’s artwork beside Nauset Light.

Mumford said she settled on painting Nauset Light because of its bright red and white colors, along with a Cape Cod cat boat with its distinctive four-sided sail.

“Then they went ahead and they used it a lot,” Mumford said. “They had prints made, and they did mugs, and they did beach towels and a ton of stuff with that one image.”

Mumford said she didn’t receive any royalties for the use of her work but said it was amazing to see her painting used in the company’s graphic. The company did not respond to a request for comment on the story behind the lighthouse image.

Her work was featured on the bags until 2010, when the company, again under new ownership, decided to revamp the design, she said. The bags still depict Nauset Light, but they no longer use Mumford’s paintings.

“It’s a very iconic image for Cape Cod,” she said.

Here’s to you, Nauset Lighthouse … We always know where home is. (Pic by @tracy.ann.koch)

Volunteers with the preservation society lead tours open to the public on Sundays from 4:30 until 7:30 p.m., May through October. In July and August, tours are also open during the same time on Tuesdays and Wednesdays.

Visitors are led up to the lighthouse’s watch room, below the light itself, where the lighthouse keeper would record the ships that passed in a logbook. The book provided a record of where a ship was last seen, should it go missing or be wrecked, Ebert said.

While the lighthouse keeper’s home remains private property, visitors can take a look inside the oil house, which has been repurposed by the preservation society to house information about the lighthouse and the people who served as keepers. 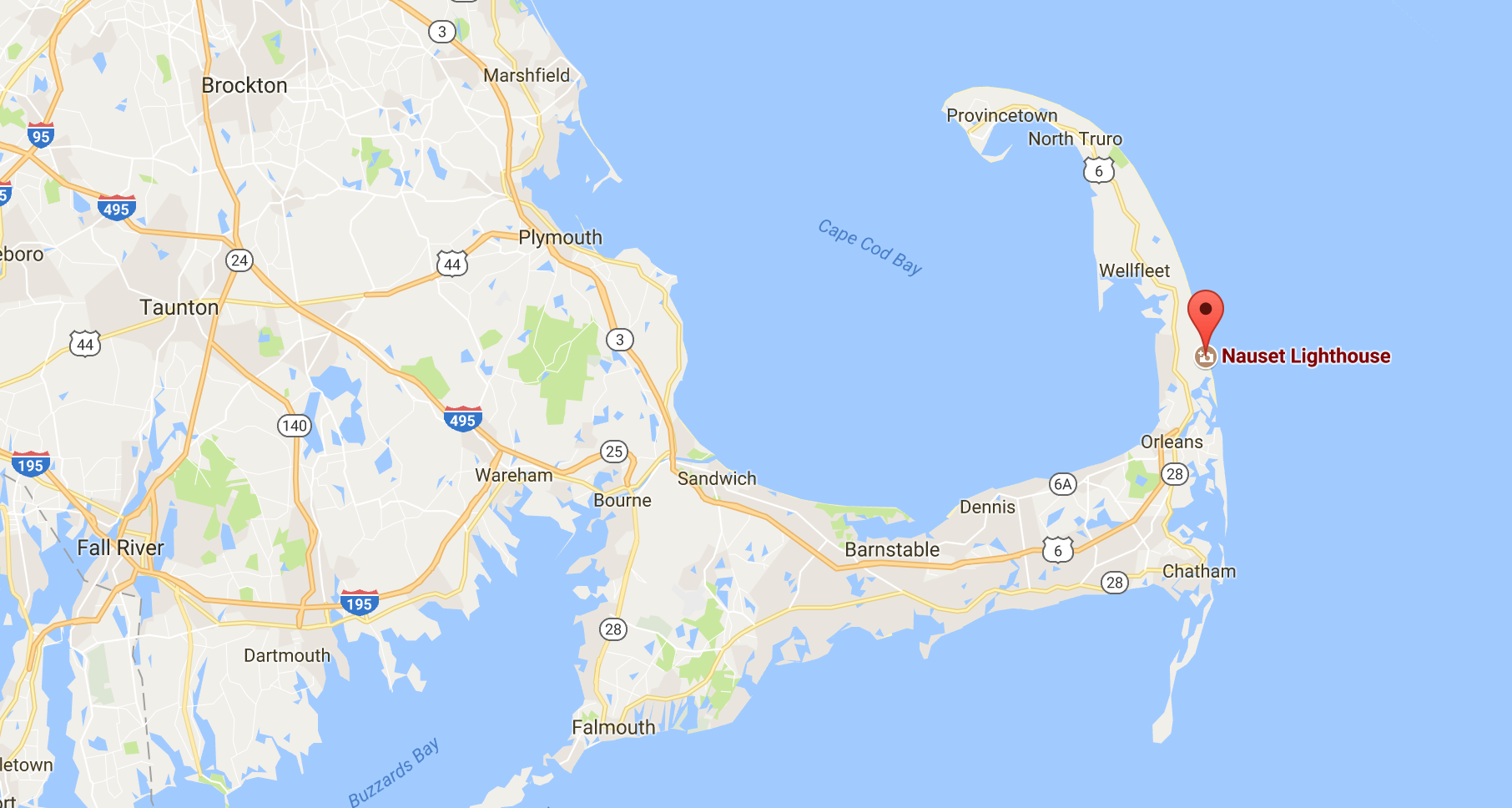 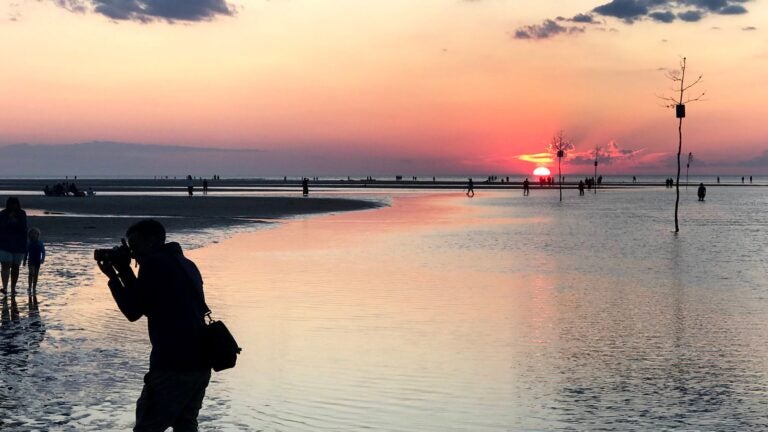