“Hello! Is this the Globe?” he asked.

Taylor was informed that, indeed, he had reached the offices of The Boston Globe.

“This is Dr. Taylor of East Boston,” he continued. “I am at Nauset [Beach] on Cape Cod. There is a submarine battle going on just offshore.”

Dr. Taylor wasn’t lying. Exactly 99 years ago Friday, a lone German U-boat attacked just off the coast of Orleans, raiding a tugboat and its four barges — and even incidentally shelling the beach where eyewitnesses gathered in awe.

The raid made the quiet Cape Cod town the only place in the United States to be hit by enemy fire during World War I.

“It brought the war that was over there, over here,” Jake Klim, the author of Attack on Orleans, told Boston.com.

As Klim writes in his book, the SM U-156 was one of the first German submarines over the course of the two World Wars to wreak havoc off the American coast, in an effort to terrorize and incite anti-war sentiment along the Eastern Seaboard. It had already sunk one 500-foot U.S. Navy ship off Long Island that summer, killing six sailors, before reaching Cape Cod.

Military officials had been aware at the time of the possibility that sharks weren’t the only thing lurking off Cape shores. Within a year of the United States entering the war, a short-lived Naval air station was built in Chatham to patrol the waters.

Klim says the routine patrols garnered countless false reports of the German enemies creeping below the surface. But on that hot and hazy July day the threat was very real.

A tugboat named the Perth Amboy had opted to tow its four barges en route to the Chesapeake Bay around the tip of the Cape’s outer arm, rather than pay the toll that then existed in the recently opened Cape Cod Canal.

Just before 10:30 a.m., Klim says a deckhand, one of 32 people on the unarmed boat and barges, saw something skimming across the surface of the water. Before he could even yell “submarine” the boat’s pilot house was struck by shellfire from the U-156‘s deck guns. The explosion itself wounded several men.

“For the next 90 minutes, what happens is that this tugboat towing these four barges in a row — it’s a five-boat target stretching across it — and it’s almost like a video game, [the submarine] sinking one after another after another. Just kind of going down the line,” Klim said.

However, the U-156 apparently did not have great aim. A number of errant shells sailed over the boats and landed on Nauset Beach and a nearby marsh. 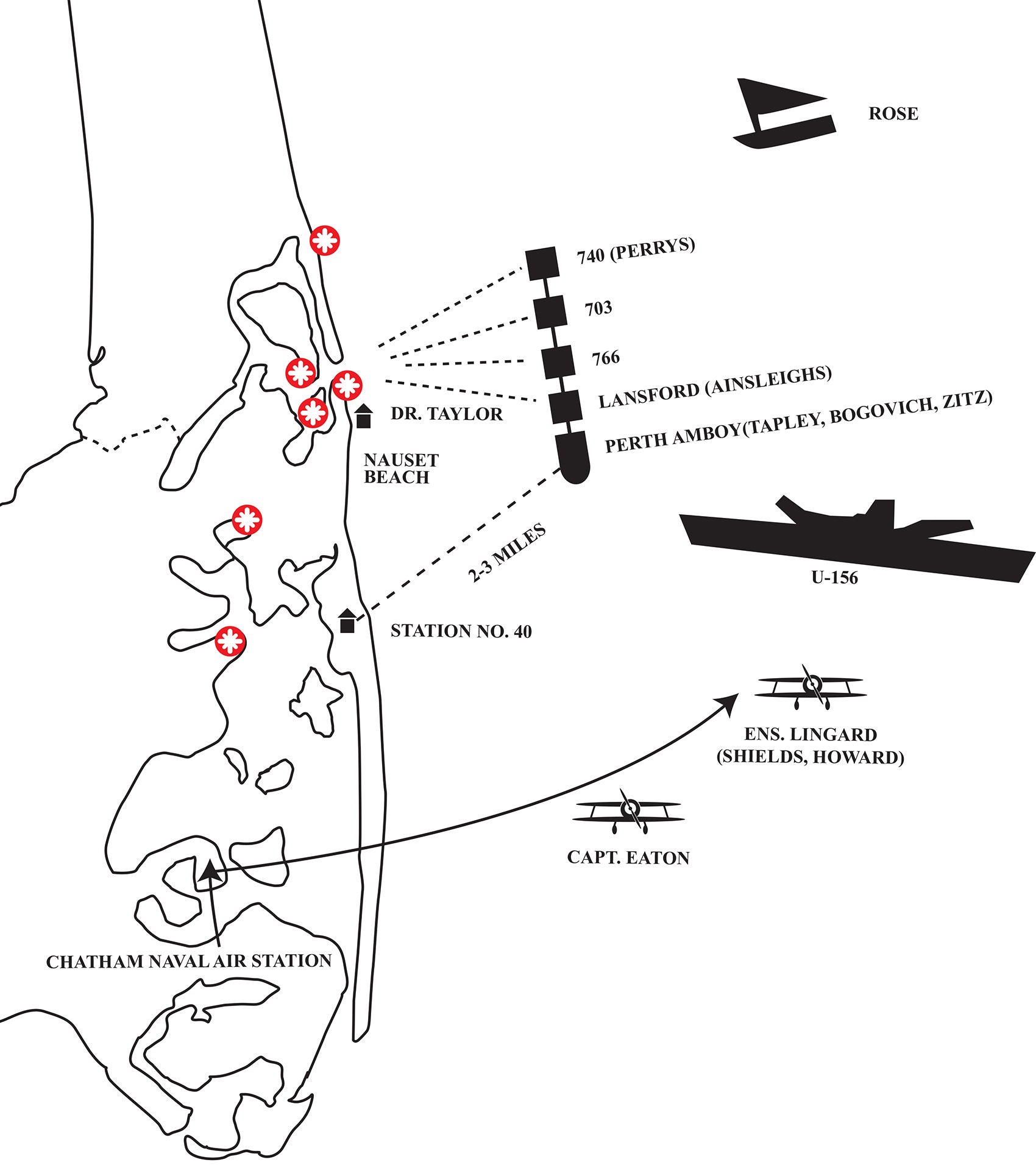 A map of the attack showing where some shells reportedly hit the shore.

“The shooting by the Germans is rotten,” Taylor told the Globe, as he watched the attack take place in realtime from the his beach house veranda.

“It has a terrible time hitting its target,” Klim said. “It shot upwards of 147 shells in 90 minutes.”

Nevertheless, according to Globe reports at the time, the submarine went down the line, sinking three of the barges.

“All that we could do was to stand there and take what they sent us,” Perth Amboy Capt. I.H. Tupley later told the paper.

Meanwhile, the ongoing attack created a sizable stir onshore. According to the Globe, beachgoers initially sought shelter upon the first shells hitting the land. But upon realizing the beachside houses weren’t a target, a large crowd increasingly began to gather on the beach.

“The bolder ones are now seated on their cottage piazzas watching the fight,” Taylor told the paper.

“You have countless people who are descending on the beach because this is before television and this is the most amazing thing they’re ever seen before,” Klim said. The Globe reported the following day that 1,000 people had crowded Nauset Beach “to watch with bated breath the work of destruction.”

However, they weren’t all bystanders. The Lifesavers, an early precursor to the U.S. Coast Guard, were the closest first responders. They had been trained to rescue shipwrecked sailors, often in less than ideal conditions. In this case, they were tasked with saving the 32 people on the tugboat and barges, who were hastily escaping into lifeboats. 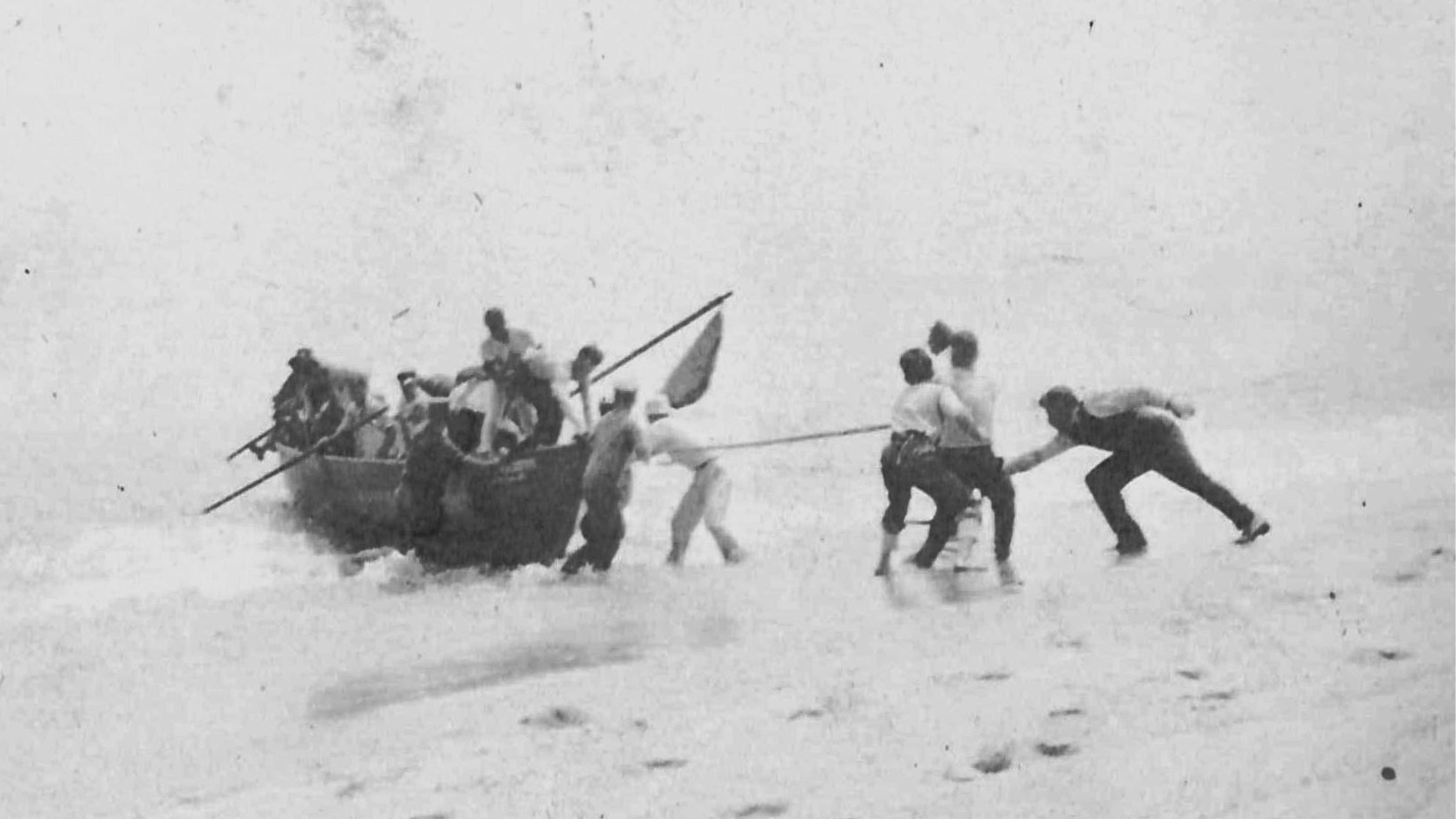 Crew members of the tugboat Perth Amboy arriving ashore in a lifeboat during the attack.

Within 10 minutes of the first shots, the attack was also reported to the nearby Chatham air base, which had two seaplanes in the skies responding to the scene by 11:15 a.m.

As the U-156 continued its assault on the Perth Amboy and its barges, the planes dive-bombed the submarine. In reponse, the U-156 turned it attention, tilting its guns upward and firing upon the approaching planes.

Each of the planes carried a six-foot Mark IV bomb, which Klim described as almost “cartoonish” and which would certainly destroy the submarine if they hit it directly. However, the bombs — which had a history of malfunctioning — failed to explode. But it was enough to scare away the submarine.

“The guys in the submarines have no idea,” Klim said. “They quickly batten the hatches, as they say, and submerge and disappear and head out back to sea.”

The U-156 would go on to harass and sink fishing boats off the coast of Maine and Canada before cruising back toward Europe in September. However, it reportedly disappeared in a North Sea minefield.

Despite the dud bombs, a Naval lieutenant later even credited the the planes’ response for saving the towns of Chatham and Orleans.

“It’s reasonably certain, had the U-boat not been attacked from the air, she would have destroyed Chatham and Orleans not because of any military value, but for the decided moral effect that such destruction would have had,” said Lt. Elijah Williams, according to Klim’s book. “What a nice breakfast story this would have given to the German newspapers — ‘Two American cities destroyed by U-boat.'” 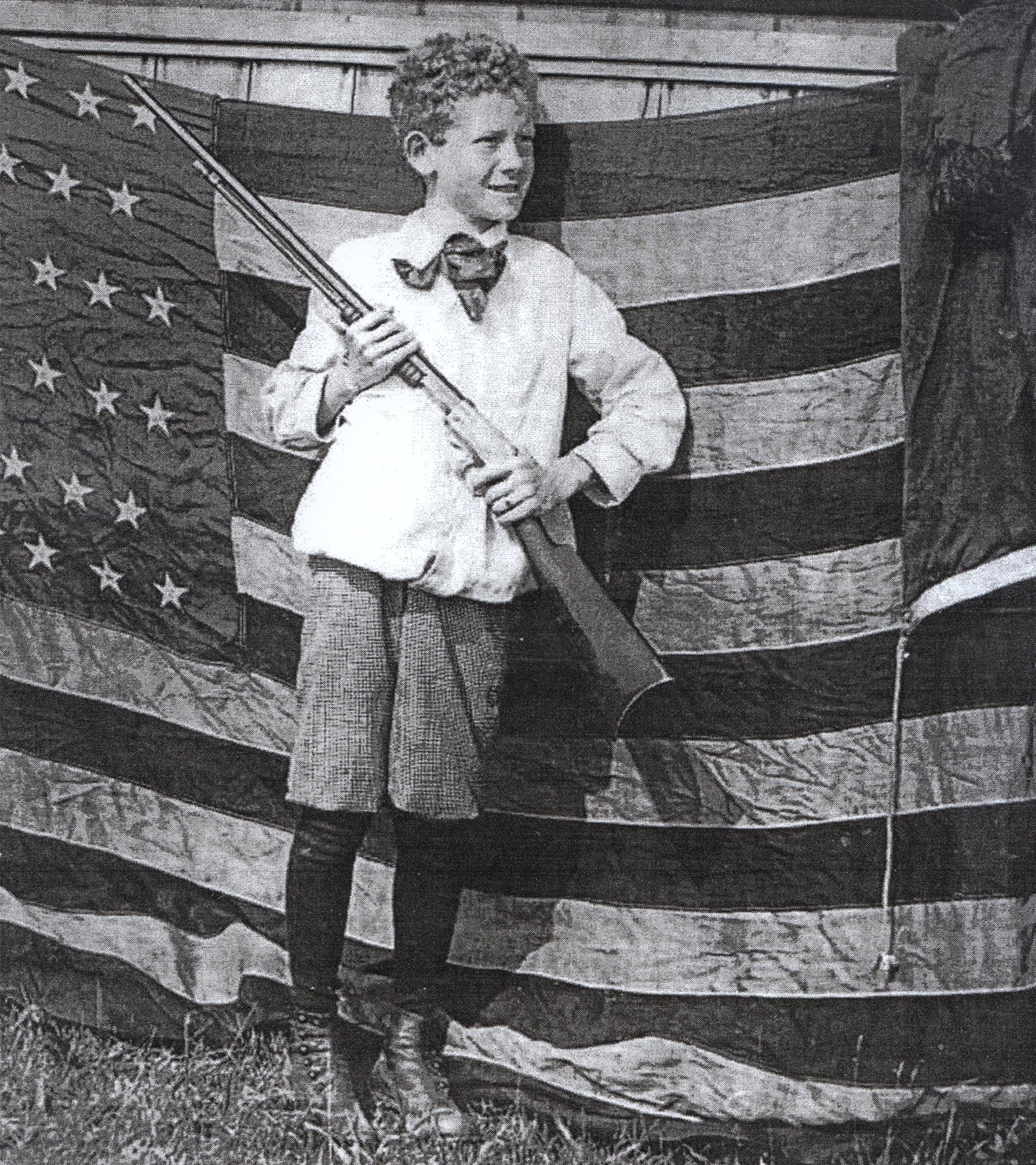 Instead, the attack had the opposite effect, galvanizing the Cape Cod community. Two of the sunk barges were empty, and the other had been filled with stone, according to Globe reports at the time. The tugboat, though damaged by the shelling and resulting fire onboard, somehow stayed afloat.

“They kind of laughed,” Klim said of the local reaction to the attack. “They made fun of the Germans a lot.”

Even amid the shelling, Jack Ainsleigh, the 11-year-old son of one of the barge’s captains, stood on its deck waving the American flag until his father forced him to get into a lifeboat.

“My little boy Jack appeared to enjoy the whole affair and his display of courage is truly remarkable,” Capt. Charles Ainsleigh, who was one of the few injured by shrapnel, later told the Globe. “As soon as the shells began coming toward us he insisted that he get his American flag.”

As those on the tugboats and barges arrived safely ashore, the younger Ainsleigh was again proudly waving the flag from his lifeboat, Klim said.

None of the men, women, or children aboard the tugboat or barges were killed in the attack. The worst of those injured was a crew member whose arm was nearly severed by splinters from an exploding shell.

Capt. Ainsleigh did however fear one casualty: His family’s dog, Rex.

According to Ainsleigh, the family was unable to find the dog before fleeing into a lobster boat that came to help them.

“He was a great companion of my wife and two sons,” Ainsleigh told the Globe after arriving ashore. “He was in the cabin when the firing started and we could not find him anywhere when we were ready to leave for shore.”

Ainsleigh said he was holding out hope that Rex had made it to the stern of the badly damaged Lansford, the only barge that was still afloat. The captain said he was hoping to go out the next day to try and find the dog. But that trip became unnecessary when Walter Eldridge, a Chatham fisherman, arrived ashore later that day with Rex safely in his boat.

Eldridge told the Globe that he had gone out to check on the Lansford and, upon arriving at the barge, was met by the dog who greeted him with “yelps of joy.” 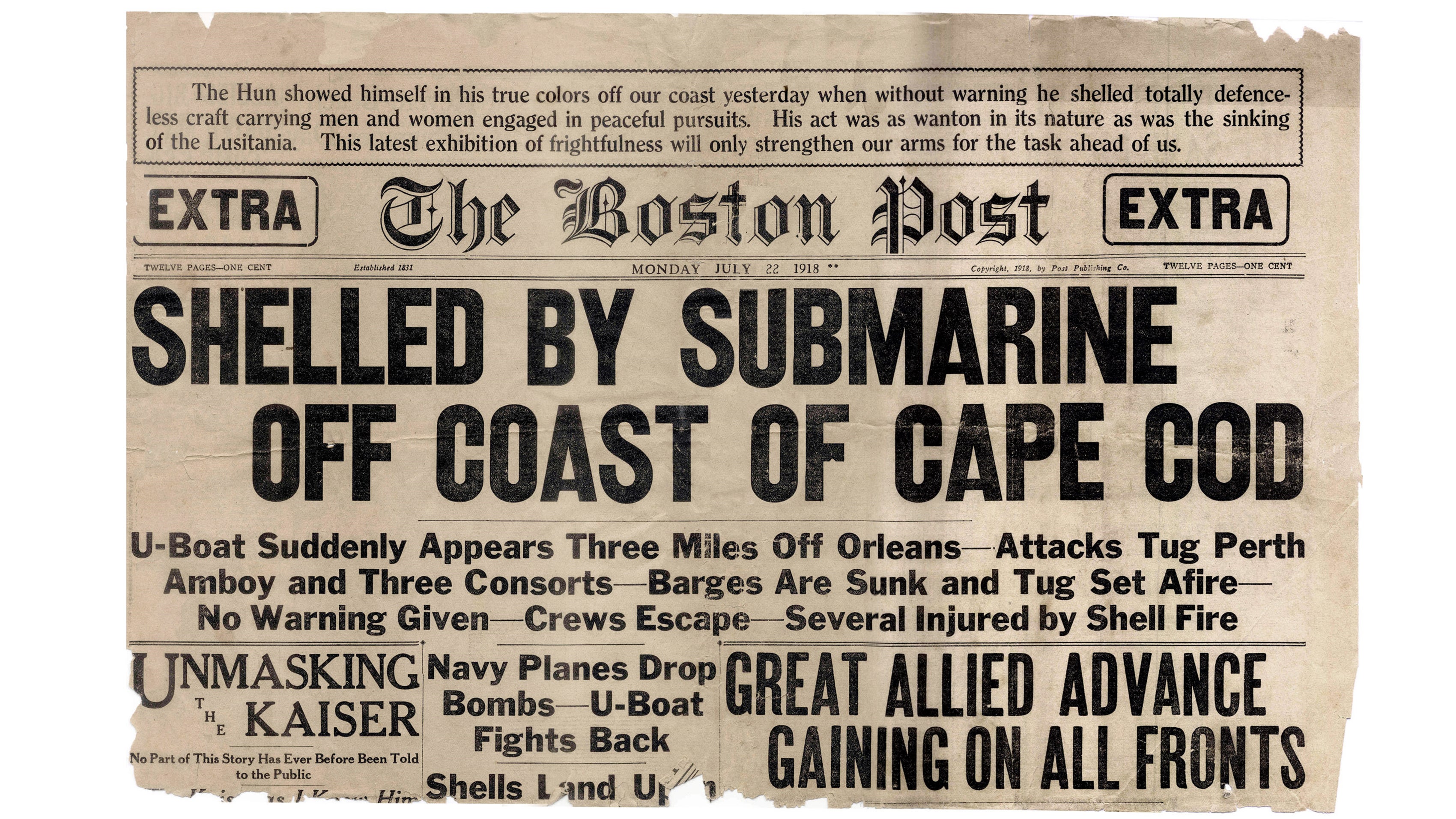 Despite its singular distinction as the only place in the country hit by enemy fire in World War I, the Orleans attack has since been, as Sen. John McCain puts it, “tucked away in the dusty archives of history.”

Pamela Feltus, the executive director of the Orleans Historical Society, said a hotel on Nauset Beach used to display a large sign commemorating the attack, but it was torn down long ago. Currently, the only marker exists on the private stairwell to a private beach.

“You almost have to trespass to see this marker,” Klim said. “It’s not easily accessible.”

But with the centennial approaching, Feltus says a townwide celebration is in the works for next year.

“We’re still working on our plans, but it’s going to be big,” she said.

Feltus says the historical society has already begun collecting artifacts from the attack — including bullet-ridden wood from the ships and an oar from one of the lifeboats — and hopes others will come forward with their own contributions.

Given that locals reportedly scoured the beach for souvenirs following the attack, they may not be in short supply. Klim says that he still comes across pieces on German shell for auction online.

After all, he noted, the term beachcomber was popularized on Cape Cod. 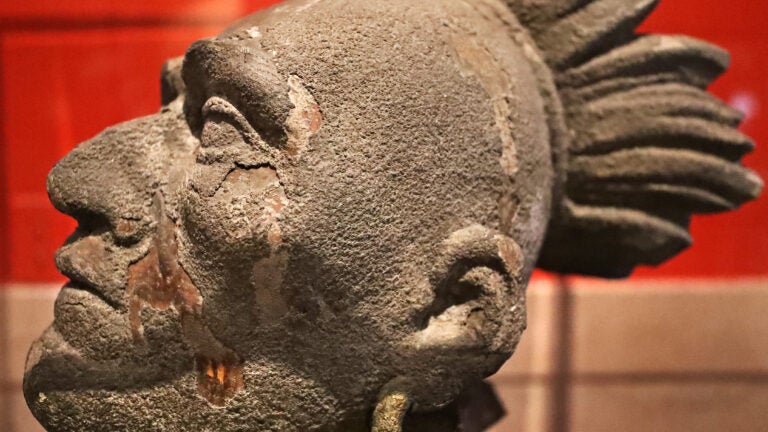