Boston City Hall is brutal, and that’s not a subjective statement.

The late longtime Mayor Tom Menino once proposed selling off the “cold, unfriendly” building to be demolished and moving city government to the waterfront. His successor, Mayor Marty Walsh, campaigned on the idea. But notwithstanding the looming concrete fortress’s many detractors — and there are many — the design of City Hall and its surrounding plaza is a testimonial to brutalist architecture.

Fifty years after City Hall opened, it’s a style that was as popular back in the 1960s as it is misunderstood today, says Mark Pasnik, an architecture professor at Wentworth Institute of Technology and author of “Heroic: Concrete Architecture and the New Boston.”

“So many people call these buildings Stalinist, but nothing could be further from the truth,” Pasnik said. “They were very American, and they were also very democratic in their aspiration.”

City Hall is just one — though perhaps the most notable — example in a wave of major brutalist buildings constructed in Boston in the 1960s. The city had been suffering from a period of decline during the early- to mid-20th century. However, the Boston Redevelopment Authority, flush with public investment, was hoping to reinvigorate the city’s urban center. Boston City Hall, as well as City Hall Plaza and the rest of Government Center, replaced the run-down neighborhood of Scollay Square.

“The intentions behind Government Center as a whole were to show a new direction for the city of Boston, which at the time in the ’50s was really starting to sink into the doldrums of not a lot of economic activity,” Rosanne Foley, the executive director of the Boston Landmarks Commission, said. “People at the time felt that the sort of 18th and 19th century narrow streets and lots of old buildings … were holding them back.” 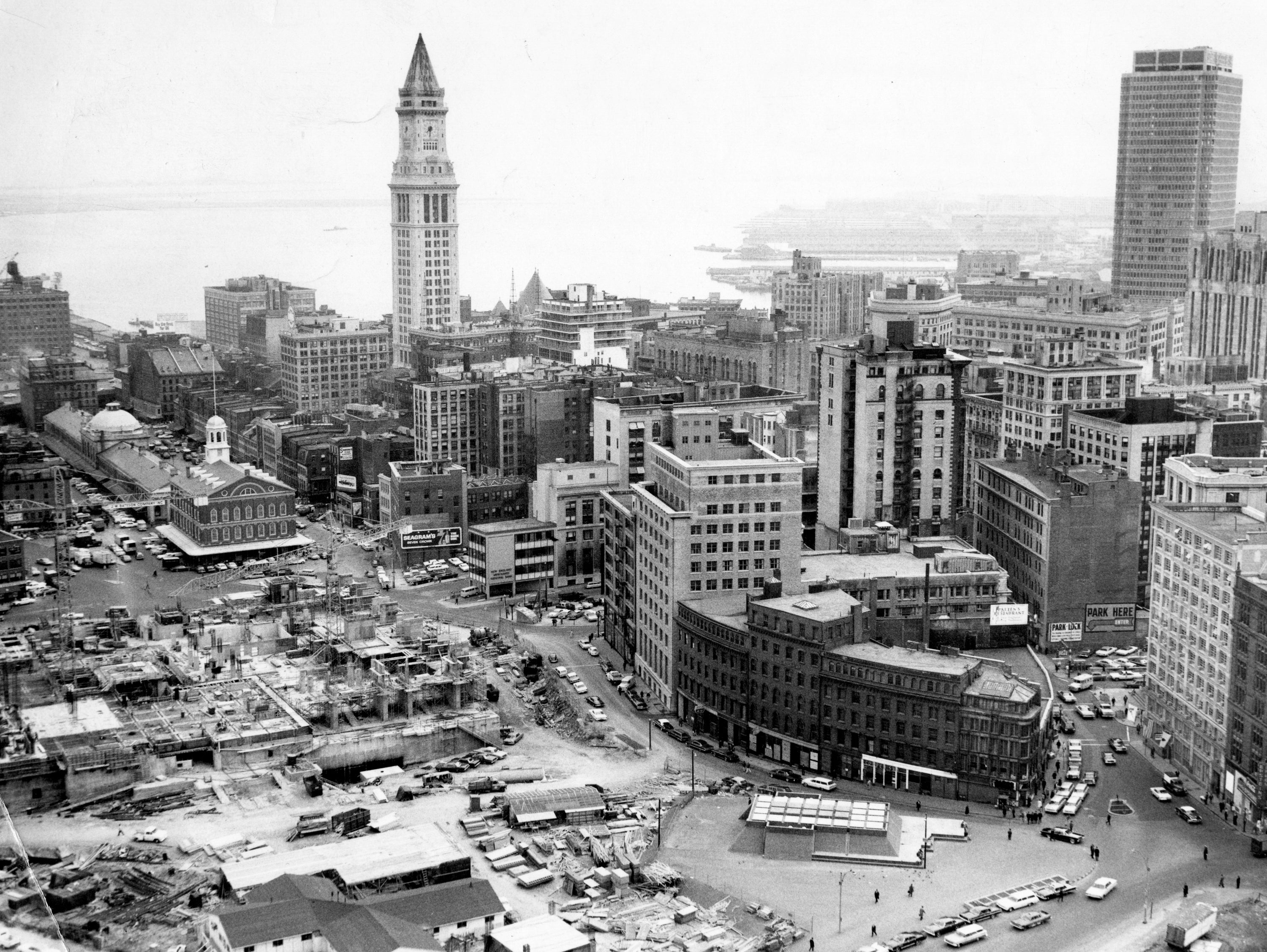 An aerial view of downtown Boston, looking over the construction site of the new City Hall, Faneuil Hall, and the Custom House to Boston Harbor, in 1965.

“The idea was that we’d moved into a new world, and the new world needed modern, up-to-date, stylist, progressive buildings,” says Daniel Abramson, an architectural history professor at Boston University.

The city went on an international contest to select the design for Boston’s “New City Hall.” After receiving a total of 256 entries, a panel of judges picked the winning design, a collaboration between Gerhard Kallmann, Noel McKinnell and Edward Knowles, in May 1962.

Admirers of the Swiss-French architect known as Le Corbusier and his modernist designs, such as La Tourette monastery in France, the trio’s exposed concrete, nine-story design — with the City Council Chamber and Mayor’s Office both projecting out over the plaza — was constructed almost exactly according to plan, said Foley, “which is pretty rare.” In their decision, the judges raved about their “daring yet classical architectural statement” that went above and beyond their criteria for the project and clearly defined “the areas of heavy public contact and the areas devoted to ceremonial functions.”

“Kallmann, McKinnell, and Knowles did have an idea that this would be a very democratic building,” Pasnik said. “They saw it as open. There’s very large columns that allow you to enter into the building in multiple ways. It doesn’t work like that anymore, but that was the original idea of that.”

Though the building’s north entrance has been closed since 2001, the original idea allowed people to enter City Hall through that side, take care of transactions, like paying a parking ticket or getting a permit, and then continue to walk through the rest of the city.

“The whole thing was conceived with that sense of openness and aspiration to be very public, to be grand, to represent the civic realm,” Pasnik said. “You might just flip through it like you might a galleria in Europe or something.”

Concrete as a material was both popular, economically viable, and locally appropriate in what was predominantly a masonry city at the time, according to Pasnik. 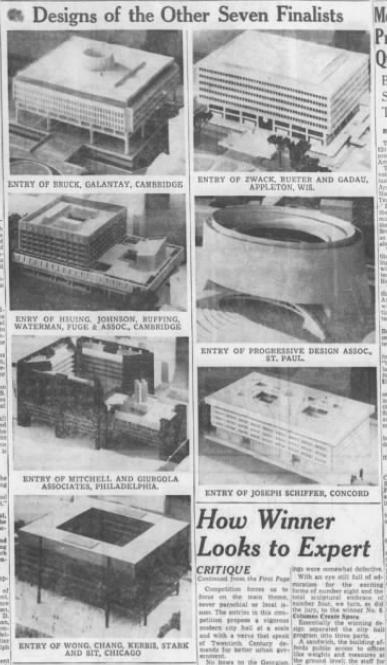 The seven other finalists for the New City Hall.

It also symbolized modernity and durability and set civic buildings apart from the glass and steel style of architecture that had become “synonymous with corporate America” in the 1950s, according to Pasnik. In fact, seven of the eight finalists in the design contest for City Hall were made of concrete (the term brutalism originates from the French phrase “béton brut,” meaning raw concrete).

“Concrete brought with it a kind of boldness, a heaviness, a weightiness, something that could seem more permanent, that would have a greater sense of longevity,” Pasnik said.

The wide-open brick plaza also had democratic inspirations. As opposed to being formally organized, it allowed residents to move freely through the area, according to Abramson.

“In a democracy, people are not directed where to look or to go,” the BU professor said.

Inspired by wide-open public gathering spaces in Europe, like the Piazza del Campo in Siena, Italy, City Hall Plaza was intended to serve as a blank campus for large events, whether it be a Super Bowl championship celebration, a political protest, or a winter festival. Pasnik says it’s “incredibly effective for big events.”

“During the majority of days of the year, it’s kind of empty, as fairgrounds are, or kind of underutilized and formless,” he said. “And yet at certain moments, it’s very lively and filled with temporary programming. And in those instances, people enjoy it.” Tom Brady, Bill Belichick, and Rob Gronkowski address the crowd at City Hall Plaza after winning the Super Bowl in 2017.

However, not all of the initial aspirations for City Hall and City Hall Plaza were fulfilled.

Brutalism as a style began to fall out of favor in the 1970s. Experts attribute a variety of potential reasons. Abramson notes that concrete as a material can appear “off-putting,” “overbearing,” and “indecipherable.”

“The building doesn’t look familiar,” he said. “It’s hard to understand. And I think those types of buildings — because they’re unfamiliar and don’t convey easily what their rationale is — that people are more perplexed and put off by them.”

Pasnik says that the popularity of brutalism was correlated with decreasing public trust of government in the 1970s — on both sides of the ideological divide.

However, perhaps more important than people’s personal feelings about City Hall is the fact that the style never lent itself well to creating a particularly welcoming public space, as Paul McMorrow wrote in a scathing 2013 column for The Boston Globe.

City Hall is so ugly that its insane upside-down wedding-cake columns and windswept plaza distract from the building’s true offense. Its great crime isn’t being ugly; it’s being anti-urban. The building and its plaza keep a crowded city at arm’s length. It disperses crowds, instead of gathering them together. It creates an island of inactivity, several blocks long and wide, in the middle of what is otherwise a bustling commercial district. It’s as if the complex’s architects vowed to make up for the bawdy sins of Scollay Square by creating a space that no one would ever want to congregate around. The primary function of cities is clustering people together, but City Hall goes to great lengths to repel them.

City officials have been a bit more diplomatic. Foley notes that, with the rise of the internet, many face-to-face transactions are not as necessary.

“People can pay their parking tickets online,” she said. “They don’t have to come down and write a check with a quill pen or whatever.”

The criticisms of City Hall Plaza’s functionality underscore the city’s recently announced plans to move forward with a “comprehensive redesign for the City Hall campus” as it approaches its 50th birthday this summer. The host of planned infrastructure upgrades to the area include plants, a fountain, and better access to utilities.

The plans also call for the reopening of the north side entrance in an effort to increase access to both “the public, transactional places in City Hall, as well as improve overall accessibility to City Hall Plaza.”

“These improvements are not only necessary for the long-term viability of City Hall and the plaza, but are an important part of our plan to make these spaces a destination,” Walsh said in an announcement earlier this month. Harkening back to his earlier metaphor, Abramson said that, generally, fairgrounds are not in the middle of cities and have no “intrinsic beauty.”

“The positive of [the plaza] is it’s Boston’s fairground and the negative part is that you don’t really want an empty fairground in front of your city hall in the middle of your city the rest of the year,” he said.

According to Pasnik, another one of its shortcomings is that, unlike its inspiration across the Atlantic, the plaza isn’t as enclosed along and activated along its edges.

“If you were to look at a plaza like Siena, it’s surrounded by cafes and small shops and things like that all the way around the perimeter,” he said. “That makes people spill into the site.”

While the added greenery and infrastructure improvements aim to improve the day-to-day life in City Hall Plaza, Abramson says it’s important to balance those efforts with the consideration that “you’re going to lose something.” Namely, he says, the city’s ability to host big, lively gatherings downtown.

“It was planned to be unplanned,” he said, later adding, “It’s always better if you look to see what’s both good and bad about something as it exists, before you decide to change that.”