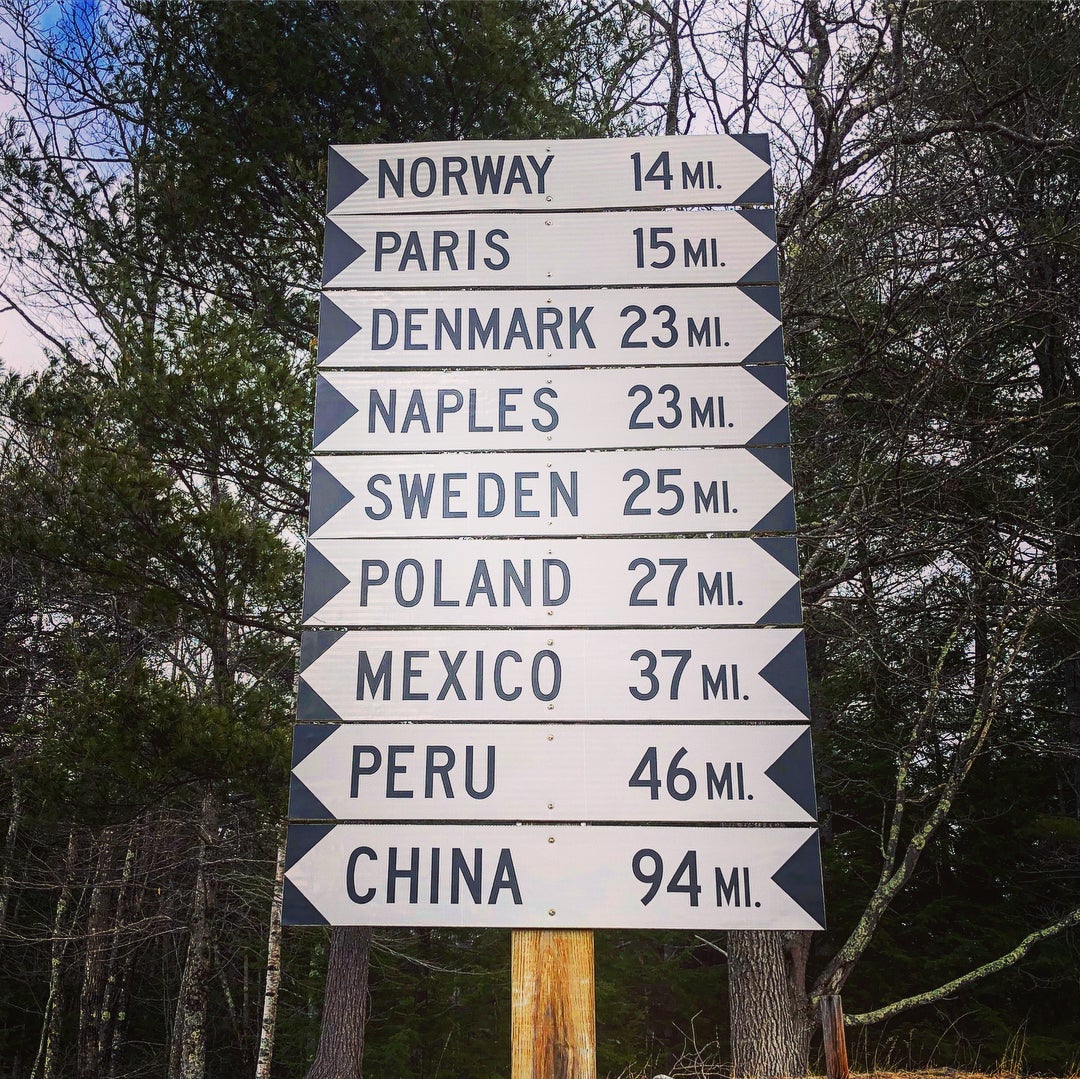 There’s a place in Lynchville, Maine, where Route 35 meets Route 5, that is both 23 miles from Denmark and 37 miles from Mexico.

One direction is 14 miles to Norway and 25 miles to Sweden, the other, 46 miles to Peru and 94 miles to China, a tourist-photo-worthy roadside sign directs travelers.

It is indeed something likely to be emblazoned across a postcard, and it’s 100 percent true: Mexico is down the road, if you’re talking about Mexico, Maine, of course.

The peculiarity of how some of the state’s 491 cities, towns, and plantations ended up making the map of Maine sound like the map of the world is an occasional point of conversation for local historians.

But there’s no single reason why.

“It’s a sort of an ongoing story that’s sort of part of the mystique and the romance of Maine and its history,” State Historian Earle Shettleworth Jr. recently told Boston.com.

Maine as it is today, after all, was not one of the 13 British colonies.

In fact, it wasn’t a state until well after the American Revolution, receiving statehood in March 1820 and breaking away from Massachusetts under the Missouri Compromise.

The change ushered in a period of growth through the Civil War for the young country’s northern state, as the population rose and residents set up new towns, according to Shettleworth, who said many were small, agricultural communities.

Maine’s relatively late — at the time — statehood and development may have played a role in the reasons why some towns didn’t follow suit with the English-named towns and cities scattered across the region, he said.

“That is a later period that is not dependent upon the more traditional English names, and I think that’s where you get a lot of these names,” Shettleworth said.

Sometime before or around Feb. 5, 1818, Massachusetts state Rep. Japheth Washburn brought a bill to the Legislature to create a new town — one that broke apart from the existing Town of Harlem — in what would become the state of Maine almost two years later.

It was to be called Bloomville, but a fellow representative, one from Bloomfield — a town up the river — piped up: What if the change created problems for mail delivery?

“So Mr. Washburn chose instead the name China, which was the title of one of his favorite hymns and was not duplicated anywhere else in the United States,” says “China, Maine: Bicentennial History,” a book published in 1975 that documents the town’s formation.

Washburn’s quick thinking gave the town its name, although to this day its unclear which hymn, exactly, is the town’s namesake, according to Kelly Grotton, a Town of China deputy clerk.

“It has nothing to do with the country as far as we know,” she said.

While some naming theories seem logical in many cases, some towns, like China and Norway, have quirky origin stories all their own.

In an interview, Sue Denison, a member and volunteer of the Norway Historical Society, was quick to point out the small town’s simple, but perhaps misinterpreted, history of its name.

“This town was not founded by Norwegians, and we have nothing to do with the country,” she said. “Never have.”

The town intended its name to be “Norage,” which legend says was the American Indian word for “steep falls” — a reference to the town’s waterfall, according to Denison.

But for some reason, when the official paperwork came back from the state, the town found “Norway” scrawled out instead, she said.

If there ever was a particular reason, it was certainly lost in time, since a fire at the town clerk’s office in the 1840s turned all of Norway’s original records to ash.

“I like to tell the story that the town is named what it’s named because of a typo,” Denison said.

As for some of the other names, there are several theories:

In deciphering the meaning behind some of the naming decisions, Shettleworth pointed to the importance of cross referencing the year a town was created with what was going on in the country and world at large at the time.

Perhaps most important to consider is how the 19th-century newscycle operated: newspapers largely reported state, national, and international news, overlooking the hyper-local and regional news of the day, he said.

Take a look at Moscow, Maine.

The town was founded in 1812 — the same year French Emperor Napoleon Bonaparte invaded the Russian city with his army.

“How does someone choose that name? They were aware of what was going on,” Shettleworth said.

Other examples, not only in Maine but across the modern day northeastern states, include towns that take on the classicism of ancient Greece and Rome in the early 19th century, he said.

At the time the Greeks were seeking independence from the Ottoman Empire. The result in Maine could have been the creation of the towns of Troy and Athens — to name a couple — Shettleworth said.

A form of kinship

Another theory is a hybrid between American interest in current events and a sense of American values.

As more colonies across the globe fought for independence, particularly in Central and South America, towns in Maine, like Peru, took up their names in their honor.

“During the period while the Maine town (Peru) was developing, the South American colonies were breaking away from their respective rulers; the spirit of liberty and independence was rampant in the early part of the nineteenth century,” wrote Ava Harriet Chadbourne, in her 1955 book, “Maine Place Names and The Peopling of Its Towns.”

“Peru was liberated from Spanish rule on July 28, 1821, and Peruvian independence was proclaimed on the same day,” she continued in the book now cited as one of the definitive explanations on how some of the names came to be. “The Maine town honored the South American country by the adoption of the name Peru, on its incorporation in 1821, changing its name from Patridgetown.”

As Chadbourne and a town website note, the similar sympathies led to the naming of Mexico, Maine, as the United States’ southern neighbor fought for its independence between 1810 and 1821.

“The inhabitants of the little plantation of Holmanstown in Maine complimented the efforts of the Mexicans in their struggle for liberty by naming their own town for Mexico, on its incorporation in 1818,” Chadbourne wrote.

Elsewhere, town names formed from several other influences, according to Shettleworth, including some named after their settlers’ native countries.

Belfast, Maine, was settled in 1770 by “Scottish-Irish families from Londonderry, New Hampshire,” the town’s website points out, although it may be hard to say if their nationality indeed played a role.

“Legend has it that the name Belfast, after the Northern Ireland city, was chosen by a coin-toss,” the website says.

Other places are thought to be named because of their geography — where they are placed in relation to other foreign-named communities — although as Maine Public Radio reports, that theory is not necessarily the sole one for many towns.

Shettleworth said numerous towns are named after places mentioned in the Bible as well as in other books, particularly as popularity rose in the late 1700s and early 1800s around historical novels, which often romanticized faraway places.

Despite the fact both China, Maine, and Norway, Maine, have absolutely no direct ties to the countries they share their names with, that doesn’t stop foreign tourists from making an occasional visit.

And the name also means there’s some confusion around the Norway Historical Society’s Facebook page, which sometimes receives inquiries from folks seeking genealogical information on their European ancestors — just a few of several different questions the group receives because of its name, Denison said.

“They ask us questions about Norwegian architecture and glassware and all kinds of stuff,” she said.

Grotton said the Town of China has seen its share of Chinese tourists in the past, including some who’ve snagged a photo or two standing next to a town sign.

Similarly, Denison said the former mill town gets a foreign visitor from time to time, whether that person knows the local lore or not.

“Every once in a while someone from the country of Norway comes to see the place based on the name,” she said. “I don’t know if it’s not until they get here they discover there’s no connection.” 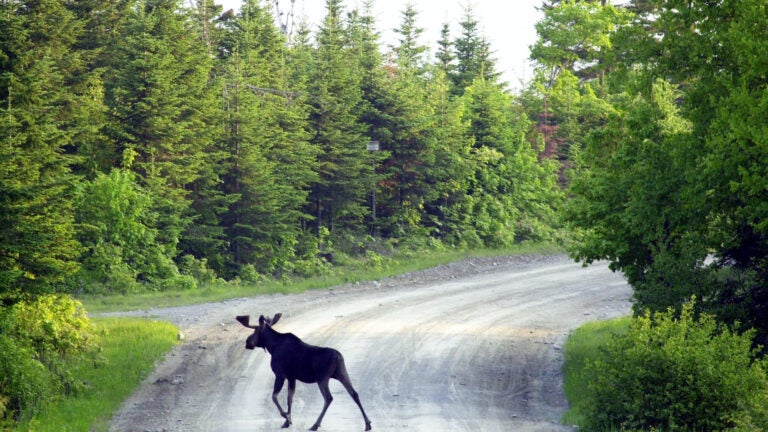